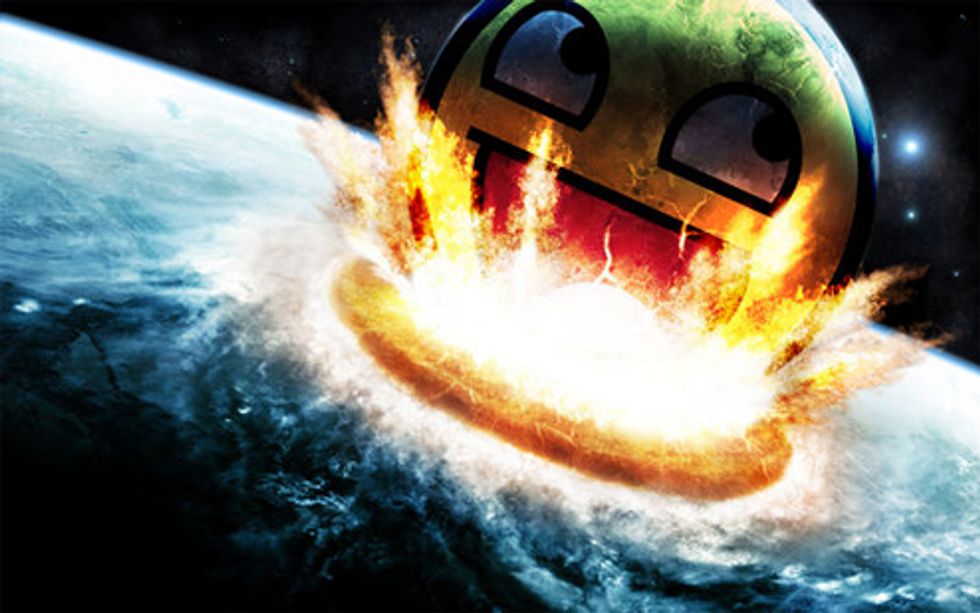 Sure, there's your Glenn Becks and your Alex Joneses, but let's never discount the pure joy of good old-fashioned batshit fundagelical craziness, and by that, we mean Pat Robertson, who700 Clubbed us Tuesday with the news that any moment now, God may unleash the End of Days by sucker-punching the planet Earth with a bigass asteroid that will wipe out a third of humanity, just like He promised in the Book of Revelation. And it could happen next week! Or in a thousand years. But it's definitely on the way! Oh, Pat Robertson, you are still a national treasure and we will never write you off as a has-been. Your old-school crazy is an inspiration to us all, and a reassuring presence: when so many hucksters come and go, you are a reliable source of unfiltered Jesustupidity.

So apparently what set Pat off this time was the news that a new study, due out today, will show that our little planet has actually sustained a lot more asteroid impacts than had been previously thought -- between three and ten times more, in fact. Space, it turns out, is just crowded with big chunks of rock waiting to make a big ol' disaster movie on us, only there's no Bruce Willis or Billy Bob Thornton to save us. Also, we've got Barack Obama in the White House, not Morgan Freeman.

Now this is just excellent news for Pat Robertson, because he just happens to have a book out on that very topic! Not science so much, but worldwide destruction. And if you read his The End of the Age, you will be ready for that great day when Jesus, tired of his toys, smashes them and sorts the sheep from the goats, which is also an excellent reason to start playing Goat Simulator every waking hour of your day, because if the world's ending, you may as well have fun. And so of course, the news that theoretical asteroids may be headed for Earth put Pat in the mood for some sales and some Doomsday Preaching:

“I wrote a book!” Robertson advised viewers. “It deals with an asteroid hitting the Earth. I don’t see anything else that fulfills the prophetic words of Jesus Christ other than an asteroid strike.”

He continued: “We’re big enough to draw some of them in. And as somebody said, it’s ‘blind luck.’ Well, it’s the mercy of the Lord. But if that mercy ever got lifted, whew.”

You see, you may have been watching that Neil deGrasse Tyson fellow with all his fancy "orbital mechanics" and "gravity," but what's really at work here is the mercy of the Lord pushing those big asteroids away -- and at any moment, He might just decide, "Meh, these people are getting on My nerves -- hey, Gabriel, watch this!" and then we'll all just be the eight ball in the corner pocket.

Now of course, there may be just a teensy theological problem here -- why is Pat Robertson trying to find a scientific, material explanation for what's presented in the Bible as a supernatural event? If God wants to dim the Sun and boil the seas, why would He need an asteroid to do that? In fact, wouldn't sinful humanity (past saving at that point, anyway, depending on how you read things) be more awed by all those phenomena occurring without any apparent physical cause? Bunch of mean old atheists would just say it was Newtonian mechanics otherwise.

On the other hand, Robertson does make a compelling case for doing nothing: if it's God's will, there's no point wasting money on nonsense like telescopes or possible systems to nudge an asteroid into a safer orbit -- all you can do is pray, really.

“So, hey, just get ready. Get right. And stay right with the Lord.”

“It could be next week, it could be 1,000 years from now. But nevertheless, we want to be ready whenever the Lord says, ‘I’m wrapping it up, and it’s time to come home.’”