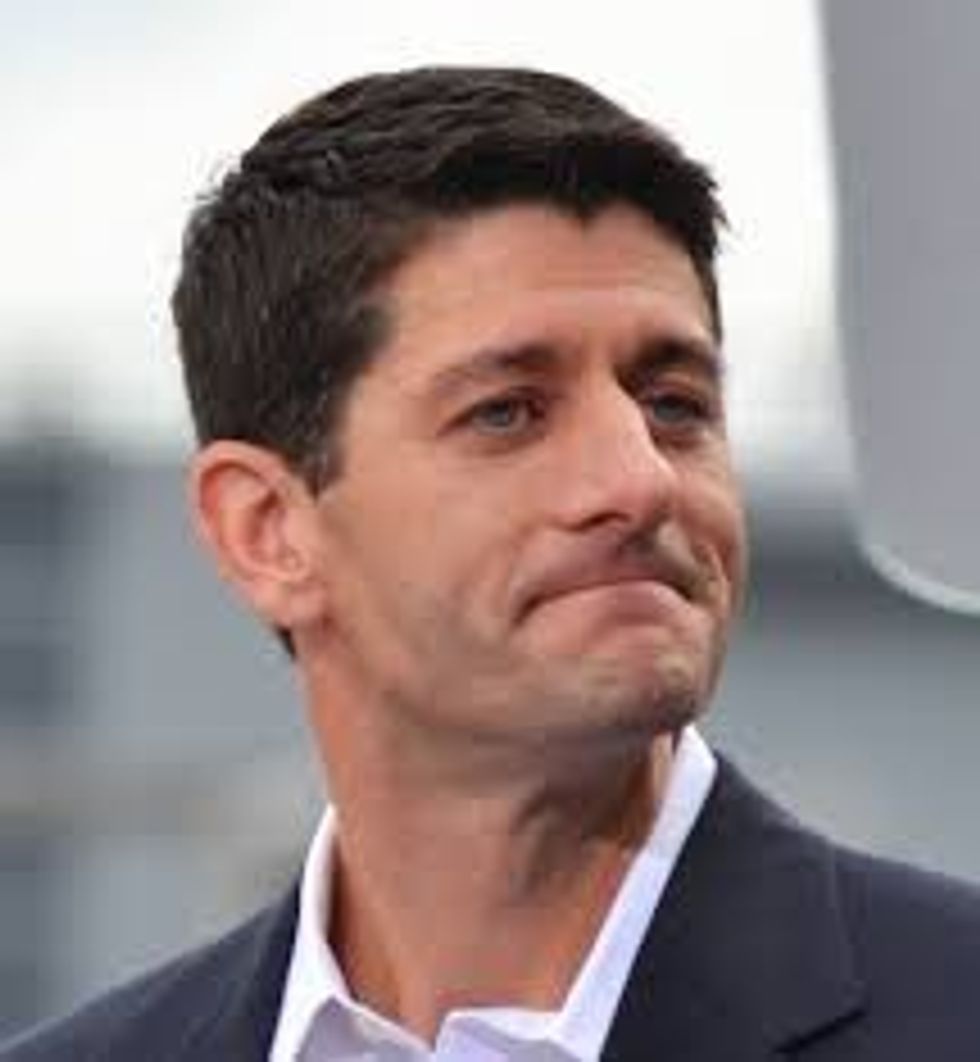 T'was mere weeks ago that we said Wisconsin Rep. Paul Ryan was not quite idiot enough to agree to be the next speaker of the House. Well, fool us twice and can't get fooled again. After weeks of pathetic public groveling from the not-quite-as-insane clown posse of the House Republicans -- primarily current Speaker John Boehner, who has a long-planned date with a big ol' bottle of booze, in about one week from right now -- Ryan has caved to peer pressure and agreed to be the party's next sacrificial lamb. Sort of.

During a meeting with his fellow House Republicans on Tuesday night, Ryan said he would fold like the kind of ill-fitted suit he likes to wear, on the condition that everyone -- conservatives, uber-conservatives, and uber-uber conservatives -- agree to support him as the "unity" candidate. Also, he doesn't want to have to work weekends:

The Wisconsin Republican told colleagues he will run for speaker if he can win broad support from the Freedom Caucus, the Republican Study Committee and the centrist Tuesday Group. [...]

Ryan’s four conditions to take the speakership are:

Sure, who would want to give up family time to run Congress and be second in line to the presidency? Ryan already gets a six-figure salary, unlimited sick days and vacation time, and excellent benefits, but no one wants to work that hard. Certainly not a member of Congress.

In case you're wondering who these supposed non-uber conservatives in today's Republican Party are, you're not alone. The Tuesday Group is supposedly an informal caucus of moderate Republicans, and no, we'd never heard of it either because "moderate Republicans" HAHAHAHAHAHA.

Ryan had at first blushed and batted his eyelashes and said he was quite flattered, boys, but he simply couldn't accept the generous offer to throw away his foolish boyhood fantasies of one day running for bigger things, like the White House, and allowing himself to be devoured by the burn-it-all-down nihilists of his own party.

However, in the liberal-biased universe we call reality, Ryan was pants-wetting terrified that those nihilists who comprise the House Freedom Caucus -- having destroyed RINO Boehner, and then the now ex-likely next speaker, House Majority Leader Kevin McCarthy -- would kill Ryan with fire as well, by refusing him the necessary 218 votes to win the speaker's race, which it still might do. And wouldn't that defeat be terribly humiliating for the wunderkind, as if he hasn't already done plenty to humiliate himself without also seeking Nancy Pelosi's gavel.

The House Freedom Caucus -- that relatively new group of uber-uber conservatives who split off from the uber-conservative Republican Study Committee, for being insufficiently uber in its conservatism -- is the group of 40 or so Republicans who have been taking America hostage over the last few years, threatening to shut down the government if it doesn't get its golden goose NOW, Daddy. Its members have expressed concern that Ryan's conservative cred is not uber enough for their approval.

Yes, we're talking about the same Paul Ryan who made a budget in his big boy pants that would gut Social Security, Medicare, welfare, and all other entitlements and yet still somehow cost taxpayers more money. For this, he is considered some kind of wonky genius by his fellow Republicans because they are all idiots.

One would think the guy who said "Let's just screw the crap out of olds and poors!" would give the uber-ubers fiscally conservative boners in their freedom drawers, but alas, the Freedom Caucusers have backed Florida Man Daniel Webster, not for his extremist ideology -- he's only the regular kind of extremist conservative, not the nihilist kind -- but rather, for "his willingness to do as they say."

In other words, Webster was their man because he was content to be their bitch.

After a chaotic weeks-long drama of civil war, complete with tears, and pretty much breaking Congress, Republicans may have figured out a temporary solution to their problem, by strong-arming Ryan into taking the job, at least until Democrats electorally relieve the GOP from the burden of Being In Charge.

So Ryan it is. Unless it is not. He's given his party until the end of the week to decide.

And if his party does cave to his demands -- and really, what choice do they have? -- the only remaining questions are how long before conservatives turn on Ryan, like Boehner before him, for being a weak liberal pawn of the Democratic Party, and what kind of SEX SCANDAL will eventually force him to resign.