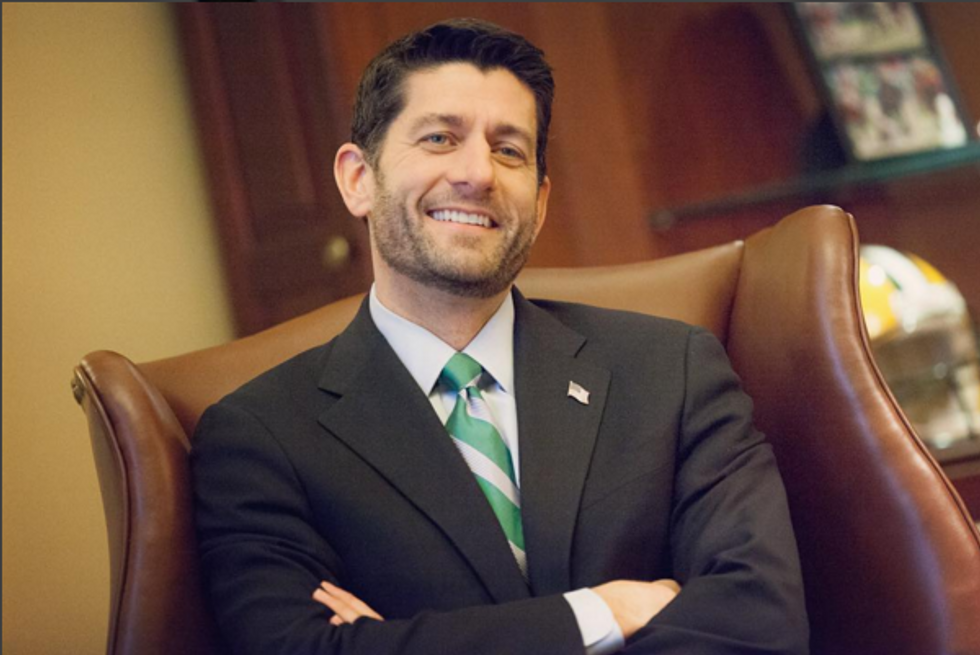 And then he'll grow his beard back

Speaker of the House Paul Ryan responded Monday to Donald Trump's threat to remove him as chair of the Republican National Convention by saying he's willing to step down as chair if Trump asks. And then maybe he'd do a little dance of joy.

In an interview with the Milwaukee Journal Sentinel, Ryan said, "He's the nominee. I'll do whatever he wants with respect to the convention," somehow suppressing an enormous sigh of relief. Ryan went on to add he's nonetheless looking forward to meeting with Trump later this week so they can play records and ask each other what's up with that hair?

"I never said never. I just said (not) at this point. I wish I had more time to get to know him before this happened. We just didn't," he said.

Things are just moving a little too fast. Donald, you've got to slow down.

Ryan also denied Sarah Palin's speculation that he was trying to deny Trump the presidency so Ryan can run for president himself in 2020:

I would not have become speaker of the House if I had 2020 aspirations. If I really wanted to run for president, I could have run in 2012 and 2016. The speaker is not exactly a good steppingstone for president. I think people who know me know that is not my aspiration[.]

Get ready for Palin to insist that if he's denying it, it must be true.

Ryan wouldn't go into detail on his differences with Trump, explaining he wouldn't conduct his bromance with the presumptive nominee through love notes passed in the back of the classroom:

I don't want to have a conversation with Donald Trump through the media. I want to have a straight conversation with Donald Trump on behalf of the party (and) myself, too. Let me say this, the man deserves a ton of credit for an amazing achievement, which is to bring millions of people into this party and to have a very impressive victory. ... At the same time, we want to make sure we don't pretend we're unified and then go into the fall at half strength.

And then, by golly, they're going to be an unbeatable cheer team, and will win the big playoff game against Hillary Clinton Tech in November.

The Trump/Ryan conflict is expected to be adapted into a teen movie in the near future, although it's not yet clear whether it will end in passionate kisses to a John Hughes soundtrack or with the Paul Ryan character walking in slow motion toward the camera while behind him, the gym where the Homecoming dance was held burns to the ground with everyone else locked inside.