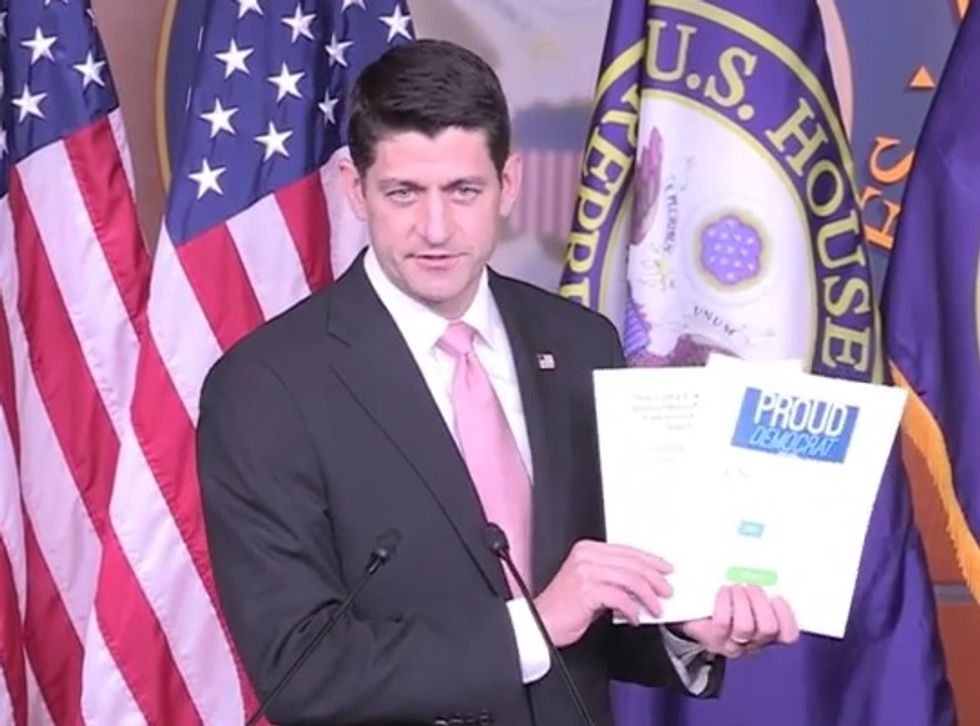 Speaker of the House Paul Ryan is simply disgusted with the Democrats who held that sit-in and messed up the nice neat House floor by calling for action on gun control. Principled moral stance? More like a cynical publicity stunt for bills that have already failed in the Senate, and so why are House Dems even making a big deal about it, with their "blah blah blah 30,000 Americans killed a year with guns?" Ryan devoted most of his weekly press conference to explaining exactly why he had nothing to say about the whole ridiculous waste of time (video up top starts at about 7:55).

I’m not going to dwell on the decorum of the House here today, other than to say we are not going to allow stunts like this to stop us from carrying out the people’s business. Why do I call this a stunt? Well, because it is one...

Ryan then made it clear that Dems had already lost fair and square in committee, and so they need to shut up already:

Let’s just be honest here. Here are some facts:

“Yesterday, the House Appropriations Committee considered its bill for Homeland Security spending. At the committee, Democrats offered in committee an amendment offering the gun measure they say they wanted. That amendment failed on a bipartisan basis. So just yesterday, the Democrats offered this gun measure they claim they want, and it failed on a bipartisan basis in committee. There was a vote, it was in the committee, through regular order, and the vote failed. That’s a fact they didn’t want to talk about.

And if Democrats want to force an issue to the floor, they can jolly well try a discharge petition instead of their very indecorous takeover of the actual floor. Did they even try to get the 218 signatures needed to do that? They did not.

Worst of all, this terrible illegal (and very well-received) protest is -- wait for it -- nothing more than a fundraising stunt for Democrats, who don't actually care about gun violence but are just trying to enrich the Democratic National Congressional Committee, which did indeed send out a fundraising email. As we read in the Good Book, not a sparrow falls to the ground without a resulting fundraising e-blast. Instead of following the proper rules, losing, and shutting the hell up like they're supposed to,

instead they’re staging protests. They’re trying to get on TV. They are sending out fundraising solicitations, like this one: Your contribution will go to the DCCC. Fifteen dollars. This one says, try giving us $25. But if you want, you can send us $50, $100, $250, $500, $1000. Because look at what we’re doing on the House floor. Send us money.

If this is not a political stunt, then why are they trying to raise money off of this—off of a tragedy?

Don't Democrats know that raising money off a tragedy is the NRA's job? Besides, Ryan explained, the Senate already failed to do anything about closing the gun show loophole and trying to prevent people on the no-fly list from being able to buy guns:

And as plenty of people have already said, maybe the answer is to both fix the no-fly list so that people who don't belong on it can more readily appeal to get off it -- we're really in favor of that -- but also so that people who are genuine security risks don't have easy access to purchasing an arsenal. There just might be bipartisan support for something like that!

Ryan closed by explaining that even though those terrible indecorous Democrats kept interfering with America's Business by holding up pictures of people shot to death (but really they were just doing it for money), he had bravely "powered ahead" to move a bill on Zika funding to committee, so hooray.

DNC chair Debbie Wasserman Schultz wasn't especially impressed by Ryan's dismissal of the sit-in as a mere fundraising ploy. the silly lady thought maybe it had something to do with wanting to end all the people getting shot, pffft:

[wonkbar]<a href="http://wonkette.com/603268/badass-democrats-will-sit-on-house-floor-until-gop-does-something-anything-about-guns"></a>[/wonkbar]We sure thought John Lewis looked like he was pretty serious about a lot more than fundraising, but we may just be blinded by his being a hero of sit-ins and activism. We didn't notice him holding up any tote bags.

Now the sit-in has ended, and CSPAN has switched from showing feeds from Periscope apps back to taking phone calls from idiots who watch nothing but Fox. We have guns everywhere, as God intended, and while no bills have been brought forward, House Democrats are saying they'll now "go back to their home districts to try to build support for legislation." That would be nice, and better than yet another moment of silence.

Or maybe if you ask Paul Ryan, he'll explain they just met their fundraising goal.