Paultards Accuse Wonkette Of Beating Up Women And Children At Paultardpalooza 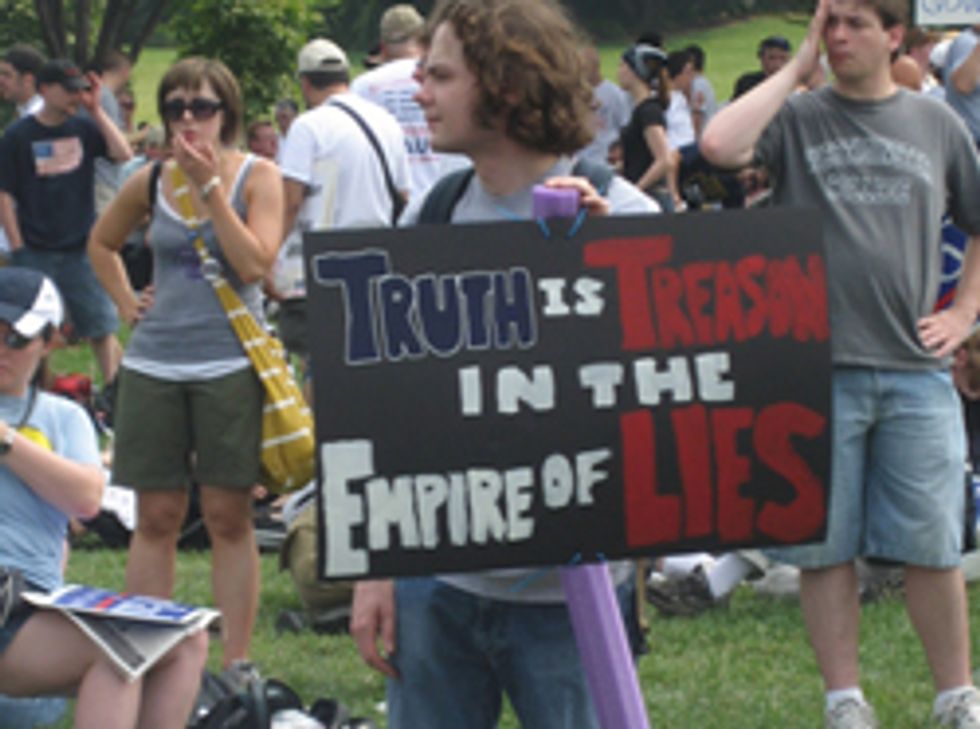 The fallout continues over last weekend'sPaultardpalooza festival in Washington D.C., which your Wonketteers bravely attended for seven minutes between episodes of drinking. If you can imagine, many hobbits on Ron Paul Forums are making strained "mental leaps" between fiction and reality. They were already convinced that our Wonkette faction was a deranged militia of "addicts and derelicts" who -- much like the British Army several hundred years ago -- would shoot at them with muskets, if necessary, to protect George W. Bush's tea tax. Now they've assumed something far more profound: that one of us was this fat, shirtless lout who went around beating up their women and children. And our punishment shall be swift and merciless: they tell us that we are "on the list." Anything but the list!

I don't know if our Marshal Kat identified the Wonktard, but we did see one guy that was disruptive beyond the point of political statement.

After he fell over a young lady and almost kicked her young toddler over we decided to take action. Hey, if you want to be a jerk, be a jerk but don't start knocking over our women and children.

Send this message to every Wonktard on every board: you were and are welcome among us to express your st Amendment rights to free speech, but where we have entered into agreement with our brothers and sisters in uniform to hold a family oriented event, that is exactly what we're gonna do and your drunk, violent, aggressive and boisterous editor was watched and handled with all care despite the fact that you were being violent and aggressive. So rather than directly accuse you of inciting violence, premeditated violence, and rather than tell you our continuing response, perhaps we should get together for ice cream in a neutral territory. And I don't mind saying that you should send your women to negotiate because your "braves" were not all that impressive.

Oyate, who struggles to stay on topic for more than six words at a time, adds: "Ladies, we got 10,000 real men who mean what they say and say what they mean. We all make money, we're not on welfare. Ditch the Wonktard lazy-assed hippy and get with a real man."

Well. Let's get the ball rolling by first turning down the ice cream social invitation, for both us and our duped female proxies. Also, we have no idea who this drunk chump kicking children was, but he sounds like he would have been pretty funny, and maybe we should have stayed a little longer. Curses!

Wait a sec... are you talking about this person?

...Because we thought (s)he was rather pleasant!

Big, bald, fat guy, drunk as hell, endangering a family event. Good job Wonkette. I suppose that you are proud of yourselves Wonkette. let it be known, we will never again allow you to endanger our women and our children. Would it were different, we would have protected your right to free speech and we would have babysitted your kids in the best of care and we don't care whether you agree with us or not.

That's all I can say. I'm full of rage at you. You allowed your personal grip with us to endanger our women and children.

Oh geez, this is definitely the worst outcome of our little misunderstanding, because we were planning on going out Friday evening, and the first place we were going to look for sitters was Ron. Paul. Forums! But now it's just this whole big thing and we will never have fun again.