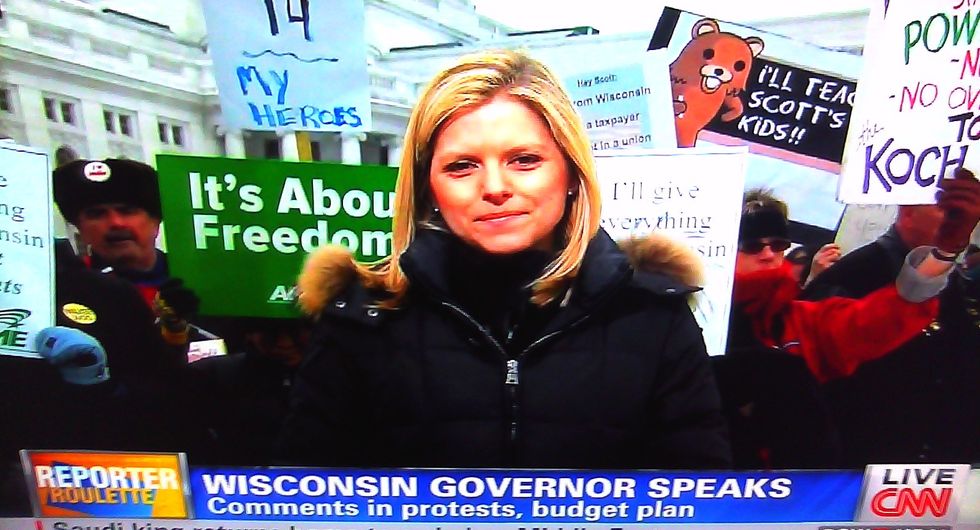 As union protests rage on and state legislatures are at a standstill, one figure has emerged on the side of Wisconsin Gov. Scott Walker who can solve all of this: Pedobear. If Walker doesn't value the teachers of his state enough to let them have worker rights, Pedobear is a perfectly good alternative. He loves children and is ready to teach them new things. Here's your Wisconsin/Indiana crisis update.

Democratic state senators from both states are enjoying life on the run in Illinois, or trying to.

By now, Jon Erpenbach, one of 14 Democratic state senators on the run from Wisconsin, has switched hotels in this city three times, a necessity, he says, as word kept slipping out about where he was staying.

What the text doesn't mention is that Erpenbach is pictured wearing a leather jacket, looking like the super-cool runaway he is.

In the case of the Indiana crew, they openly divulged their location only hours after disappearing from the Statehouse. The way they understood it, the Indiana law enforcement authorities could not follow them over the line anyway, so why bother keeping secrets?

The legislators from Wisconsin have been far more cryptic. Some said they had received threatening e-mails and phone messages, and a comment on one newspaper Web site read, “Looks like I need to go hunting south of the border,” Mr. Larson recalled. Not long ago, a handful of people who said they were Tea Party members turned up in a regular meeting spot at which the senators had come to gather, taking photographs of the senators’ cars. They would not, Mr. Larson said, return to that location (wherever it was).

This will all be turned into a film, The Outsiders 2. THEY'RE ALL SUCH REBELS!

Meanwhile, former SEIU president Andy Stern told Ezra Klein "it may not end beautifully in Wisconsin." And a former Wisconsin attorney general says Rick Scott is susceptible to charges for making ethics violations and breaking election law in what he said in that prank call released yesterday.

Obviously, state governments are broke and broken. Our political parties are so polarized that their legislators can't even be in the same state with the other side's. There is only one solution: enlightened dictatorship under the command of Generalissimo Pedobear. [NYT]