Peggy Noonan Explains Who Is To Blame For The Torture Report: The Dastardly Japanese 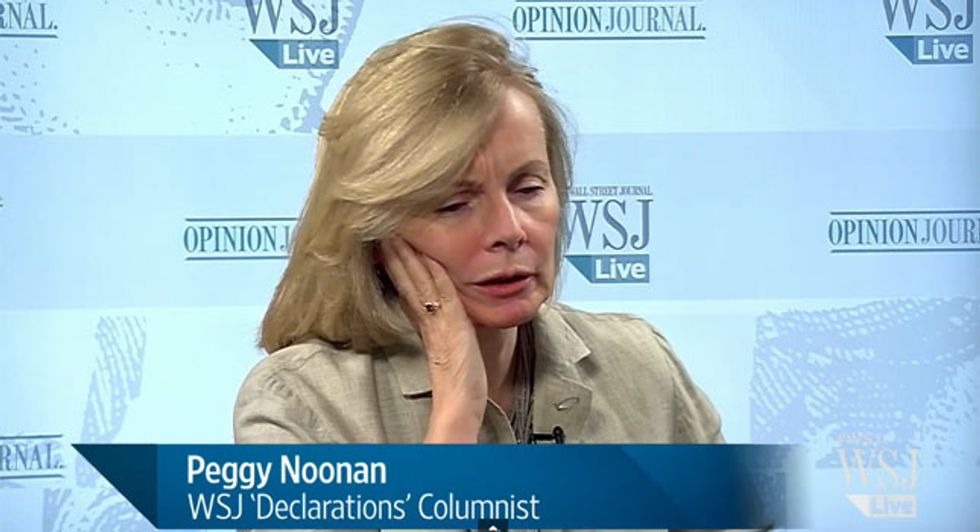 The protests were over, the protestors having returned to their hovels in the far-off, darkened lands from whence they came (mostly Brooklyn, she assumed), and Sister Peggy Noonan’s beloved Manhattan had returned to its jaunty, holiday-time normal. The Santas with their bells and their Salvation Army kettles stood in front of the gaily decorated window displays of Bloomingdale’s. Children and lovers took their turns carving smiles with their skate blades on the Rockefeller Center ice skating rink. The bartenders in her favorite saloons were a little more liberal with the good stuff when mixing drinks. The only time when she favored liberalism!

And yet, Washington still unleashed darkness upon a great nation.

The “torture report” exists. It shouldn’t — a better, more comprehensive, historically deeper and less partisan document should have been produced, and then held close for mandatory reading by all pertinent current and future officials — but it’s there.

Ah yes, the torture report. Worse than that time the current pretender to Ronald Reagan’s Oval Office ordered the release of the legal memos the last administration used to justify the torture in the first place. A great nation need not sully its mind with thinking about the things it does! Better to have a vast and dark repository of unknowns, like government-sanctioned torture or her house-boy Manuel’s last name and what he did with his free time when he was not serving her drinks in her sitting room.

Her thoughts turned to a pollster she once knew, a man who in 1988 mentioned how much Americans still hated the Japanese, and how the two of them struggled to find a reason.

We were quiet for a moment, and then our minds went to exactly the same place at the same time: Japanese torture of American soldiers in the Pacific war. The terrible, vicious barbarity of it. When the war ended, American boys went home, and the story of what they’d seen, experienced and heard filtered through families, workplaces and VFW halls. More than 40 years later, maybe it was still there, showing up in a poll.

Or maybe it was good old-fashioned racism of the kind embedded in America’s soul since the nation’s founding. Maybe it was the racialized contempt for anyone from the Far East that the country had practiced at least since thousands of Chinese swarmed our shores to die painfully while building the railroads that helped conquer the continent. Maybe she was entirely too sober if such contrarianism was creeping into her pure, Xanax-addled mind.

Shake it off, Peggy, she murmured to herself, and turned back to the keys of her ancient Underwood.

This is one of the reasons, only a practical one, torture is bad.

Ah, better. That was the sort of searing insight that keeps people returning to the Wall Street Journal’s editorial page.

But America should never again do what is asserted and outlined in the report, which enumerates various incidents of what I believe must honestly be called torture.

Not just the searing insights, but the honest accounting of character, the tough conclusions drawn after long nights of wrestling with the innate goodness of the American soul.

Someone has to be the good guy. For a long time in the world that has been our role. You might say it bubbled up from our culture.

Other cultures, hundreds of them not only on this continent but also around the world, might disagree. But those cultures are not full of Americans!

We should not judge those who, in the months and years after 9/11, did what they thought necessary to forestall further attacks on America’s civilian population. They went with the legal guidance they had, propelled by the anxiety we all experienced. “There was no operating manual to guide the choices and decisions made by the men and women in charge of protecting us,” wrote former Nebraska Sen. Bob Kerrey this week in USA Today. None of them should be abused, embarrassed or prosecuted now.

She had once spilled an entire Negroni on a light-colored frock during a White House holiday party, so she could say with authority that embarrassment is the worst sort of torture. When Nancy Reagan laughed while pretending to be sympathetic, she had just wanted to die.

Speaking of Negronis, where was Manuel? Her glass was empty and she needed more of her special thoughtfulness juice.

In his USA Today piece he slammed the report’s partisanship: “I do not need to read the report to know that the Democratic staff alone wrote it.” The Republicans refused to take part “when they determined that their counterparts started out with the premise that the CIA was guilty and then worked to prove it.”

Surely the Republicans would have written such a report in a way that apportioned plenty of blame to the members of the executive branch who ordered the CIA to torture, yes? No ducking of responsibility for the Republican Party, no sir. She looked longingly at the bottle of horse tranquilizers on the cocktail tray, but she had forgotten to refill the prescription after her last go-round with them.

There are more questions about the report … Another is the timing — the report was issued just as a defeated Democratic majority walked out the door, and has the look of a last, lobbed stink bomb: “See what the terrible Bush administration did? Bye now!” There is about the entire enterprise a sense of sin being expiated at someone else’s expense.

Had a Democratic majority been in place in the Senate during the Bush administration? She could not recall, and her Underwood did not have Internet access. But surely embarrassing the Republicans must have been the reason the report was released, and not related at all to an outgoing Senator who had agitated for it for years and knew this was his last shot.

It can be hard to take seriously a report that seems largely a product of partisan resentment, guilt and blame shifting. And yet it outlines believable incidents of what is clearly torture.

She sat back and saw that a fresh drink had been placed on her cocktail tray. Manuel must have snuck in unseen and unheard, like an illegal Mexican plodding across the border and through the unforgiving Arizona desert, and left her this gift, a reward for the grudging admissions of her latest column. Like any great American, she had earned it.