Peggy Noonan Saw A Mexican. And a Guatemalan. And A Honduran. And A…You Get The Idea 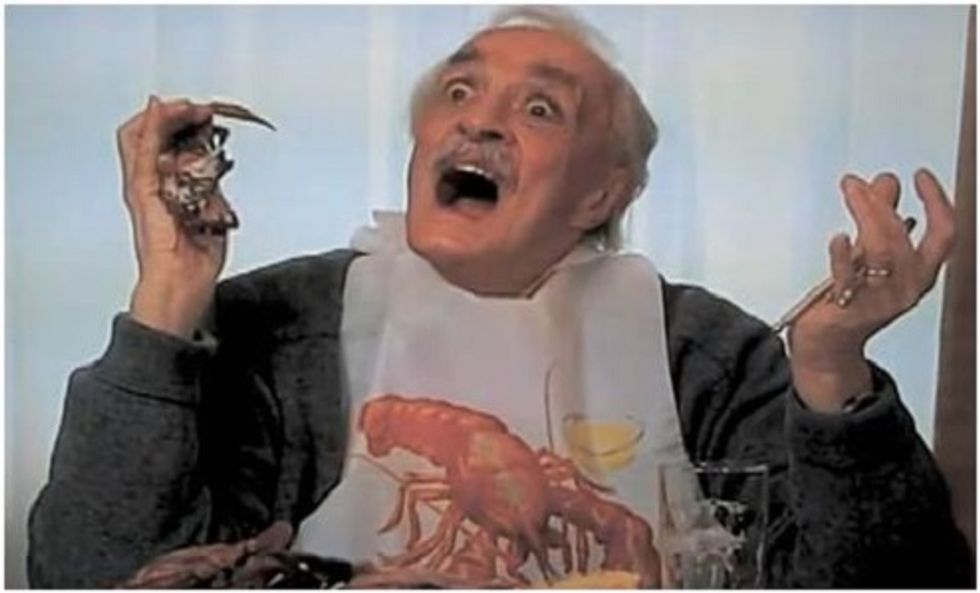 The long Fourth of July weekend had come and gone. All across the country, proud Americans participated in the great traditions of the holiday: cookouts, boating while drunk, blowing their fingers off with illegal fireworks, to name a few. But not Sister Peggy Noonan of the Order of 2-For-1 Happy Hours. Her Fourth was spent holed up in her tastefully decorated pied a terre high above the teeming streets of Manhattan. Teeming…with the hordes of filthy migrant children invading America like locusts sweeping across Egypt in the Old Testament. Okay, maybe they weren’t in Manhattan yet. Maybe they were thousands of miles away in the Southwest. But still, it wouldn’t be long…

“Meesus Noonan?” The heavily Spanish-accented voice echoed from the dark hallway outside her sitting-room. Peggy screamed and pushed up from her desk, almost spilling the last dregs of the emergency gin bottle she had dug out of her Mexican Apocalypse kit. She breathed a sigh of relief when she saw it was only Manuel, her house-boy. What was he doing here? She had given him the weekend off. Then she remembered: it was Monday. The weekend was over. She had survived. But it got her thinking. How many other proud Americans had spent their holiday holed up like she had, bravely preparing to fend off the soiled, dark-skinned ragamuffins who spell the end of America as we know it?

What is happening at the southern border is a true and actual crisis. News accounts justly use words like chaos, collapse and breakdown. […]

All this gives normal people a feeling of besiegement and foreboding. Is a nation without borders a nation?

Yr Wonkette considers ourselves to be normal people, relatively speaking, and we’re not feeling like this border crisis leads to existential angst around the question of What Is America? Mostly it’s just given a bunch of xenophobes a chance to scream incoherently, hold up misspelled signs, and play dress-up to preen for all their Twitter followers. Seriously Peggy, settle down.

This is how I think normal people are experiencing what is happening:

You just told us a couple of paragraphs ago: we are feeling besiegement and foreboding. Also, is Peggy admitting she is not a normal person? Because her lack of self-awareness is the clothesline upon which we hang this semi-occasional feature. If she goes all I, Robot on us, we’ll be out of a gig.

It's like you live in a house that's falling apart. The roof needs to be patched and there are squirrels in the attic, a hornet's nest in the eaves. The basement's wet.

Dear Jesus, no. We will not be going through 300 words of Peggy’s “House Hunters”-porn mash-up fantasy. You people are on your own there.

The president of course has rushed to the scene—to go, as always, to fundraisers. This is at the moment a scandal, but why? Clever people say it's an unforced error. He has to show he cares! He ought to journey to an overwhelmed border area, stand there and point to the middle distance as a local official in a hopefully picturesque hat briefs him. It's almost touching how much the press wants to see this. But why?

Here is where we found ourselves agreeing briefly with Peggy, which does happen if the ketamine starts wearing off before we finish writing. We’re kind of with the president on this whole border visit thing. At this point if he went the story would become about how a presidential visit looks, how it will play for vulnerable Democrats in border districts in the upcoming elections, and not whether our government is doing anything to help these refugees. (On the other hand, our boyfriend Charlie Pierce makes a good case for us being wrong.)

There is every sign he let the crisis on the border build to put heat on Republicans and make them pass his idea of good immigration reform. It would be "comprehensive," meaning huge, impenetrable and probably full of mischief. His base wants it. It would no doubt benefit the Democratic Party in the long term.

The little children in great danger, holding hands, staring blankly ahead, are pawns in a larger game. That game is run by adults. How cold do you have to be to use children in this way?

Oh, balls. BALLS. Note that Peggy doesn’t provide a lick of evidence for that first assertion. Notice she also ignores the existence of the immigration reform bill the Senate sent to the House a year ago. That bill provides funding to double the length of the border fence, station National Guard troops on the border, and train thousands of new Border Patrol agents. Not that this would provide any relief in the current crisis. After all, as best anyone can tell, the large majority of migrants hitting the border right now are being scooped up by the agents we have there now.

The feral weasels who run the House refuse to bring this or any other reform bill to the floor. Hell, they’re refusing to throw Obama a few billion right now to help pay for some emergency measures to alleviate the crisis. Would comprehensive reform help the Democratic Party in the long term? Probably! You know who it would help in the short to medium term? Some of these little children you’re so concerned about, Peggy.

Grrrrr. Someone fetch us some more ketamine.