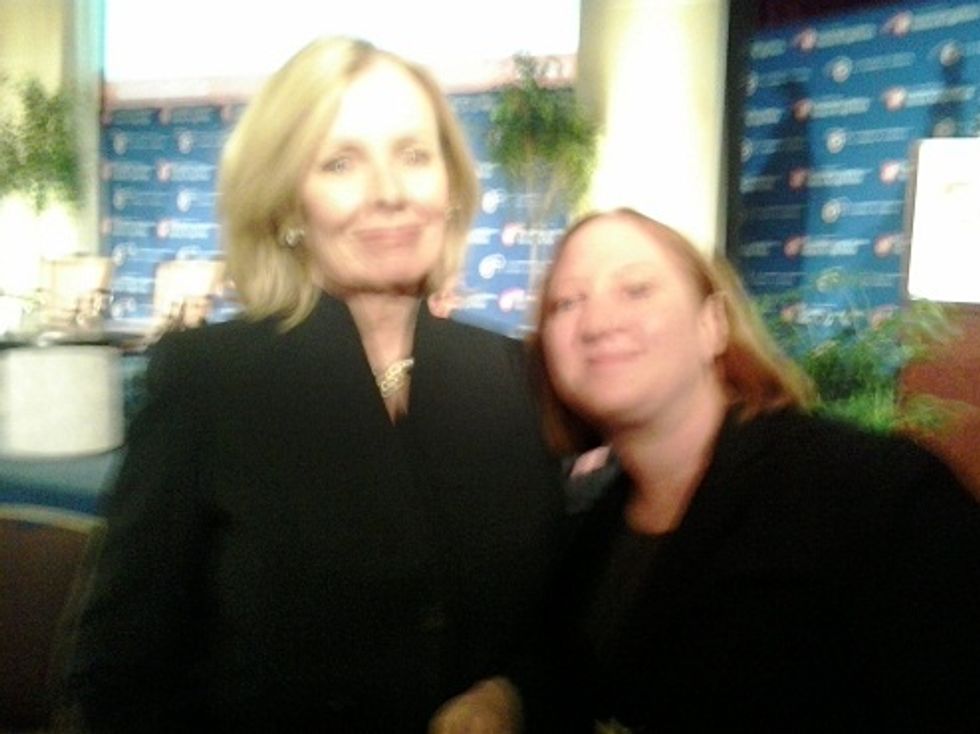 On a clear, sunny October day, Peggy Noonan ventured out of the rarefied confines of Manhattan and into the fetid lowland swamp of Washington, District of Columbia, to give a keynote luncheon address at the Chamber of Commerce's 14th Annual Legal Reform Summit, titled “Healing the U.S. Lawsuit System.” Lady Nooningham's applicability to this particular subject was not immediately apparent, but we were not about to pass up what promised to be a riveting speech, not to mention a Noonan-caliber luncheon.

After a reflective gaze across Lafayette Square at the White House, we stepped into the Chamber's Hall of Flags and took a seat at the sparsely populated press table, which was shoehorned into the back of the room against a wall covered by a massive American flag.

A flawless serving staff brought around plates of almost cartoonishly exquisite food during opening remarks by Thomas Donohue, the President and CEO of the Chamber of Commerce. He was on his way to catch a plane, but had enough time to talk about the Chamber’s important work “reforming” legal systems in individual states by installing sympathetic Attorneys General and state Supreme Court justices. From the materials available in glossy-brick form at the press check-in, it appeared the Chamber's primary aim was to better insulate corporations from pollution and product-safety lawsuits. In the obstinate places where the Chamber hadn't managed to do so, Mr. Donohue assured the crowd, “in those cesspool places, we have newspapers in all those places. I bet you didn't know that. We’d be happy to carry your column.” (Attention Wonketteers: advanced-level trolling opportunity!)

Finally, it was time for Peggy! Clearly, she knew her audience, opening with a couple of '80s-vintage lawyer jokes and a story about a revelation she’d had while in first class on a flight to Houston in which “a Bloody Mary was involved.”

She spoke warmly about the first President Bush, with whom she still keeps up a steady correspondence. She shared that she’d just sent H.W. the galleys of her latest book and in response he’d written back that he couldn't wait to read it and hoped it would be “as successful as Millie’s book.” The Bushes’ dog Millie, you see, released a book at the same time as Peggy’s first effort and the dog “sold about ten times as many copies,” which the former President apparently never passes up a chance to mention 20 years later. Peggy said that while she didn't live in Washington at the time of this literary travesty, she’d come down from New York for the Christmas Party and when she saw Millie in the White House “I always did say hello to the little bitch.”

With the endearing self-deprecation and mildly scandalous swear word out of the way, Peggy moved on to the more serious topic on the agenda: the endangerment of the “liberal project” by the catastrophic failure of Obamacare. The time had come for the President to just throw himself on the mercy of the American people, admit that the entire thing had been an unqualified disaster, and hope they would forgive him. She'd been hearing a lot of people – Democrats even – asking if anyone would be fired and how high the ax would swing.

That had gotten Peggy thinking about scandals and how real Presidents handled them with “true accountability.” It reminded her, in fact, of the Iran-Contra affair. As scandals go, “that was a bit of a doozy.” It sure was, Peggy! It was the kind of thing that you might think twice about bringing up in public if you were employed by the administration that committed all those crimes! Peggy, though, thought that President Obama could take some cues from Ronald Reagan, blessings of peace be upon him, and his “cleaning house” response to Iran-Contra because it seemed like “a textbook on how to handle things like this” (things like bungling the launch of a potentially helpful new national health care program, or like violating an embargo to sell arms to Iran to order to illegally fund Nicaraguan rebels, which are roughly equivalent).

During the rest of her time at the podium, Peggy waxed philosophical on the future of the Republican party. In the next few years, she predicted that there would either be an "evolution" to better include the tea party faction or a split with the far right spinning off into its own group. The tea partiers would have to become more “intellectually ordered,” in Peggy's delicate phrasing, in order to be taken seriously, but without them the GOP would be left without any fresh energy or ideas. Given the spectrum of views in the party, she didn't understand how Republicans weren't fighting an all-out “civil war” every day of the week.

During the Q&A, when asked what advice she would give the GOP to weather the coming turmoil, it seemed for a split second that she might be dabbling in pragmatism. She warned Republicans that they’d better wise up to the fact that “they can’t win national elections without-” we perked up: who would she tell them to stop pissing off? youth? minorities? women? “-the tea party.” Oh.

Peggy's incongruity as a lunchtime speaker for a legal reform summit became obvious when there were literally more smartly dressed CoC assistants with roving microphones than there were questions to be asked by the audience. Luckily, this left time for us to nudge our way to the front of the room and stand for a fleeting moment beside the Lady herself. A terribly earnest fan ahead of us in line, a speechwriter for a federal agency, passed us her card after kindly agreeing to take a picture for us. “Sorry if it's blurry. My hands are still shaking. I'm just so excited to talk to her.” Also, out in the lobby she admitted she'd stolen Peggy's name card from the head table, something we wished we'd thought to do ourselves.

Then Peggy was whisked away and we returned to our everyday existence, buoyed by the knowledge that even such a powerhouse of intellectual thought and political acumen as Miz Noonan was at one time upstaged by the release of a book dictated by a dog to the wife of a man who was shortly thereafter fired from his job. There's hope for us yet.