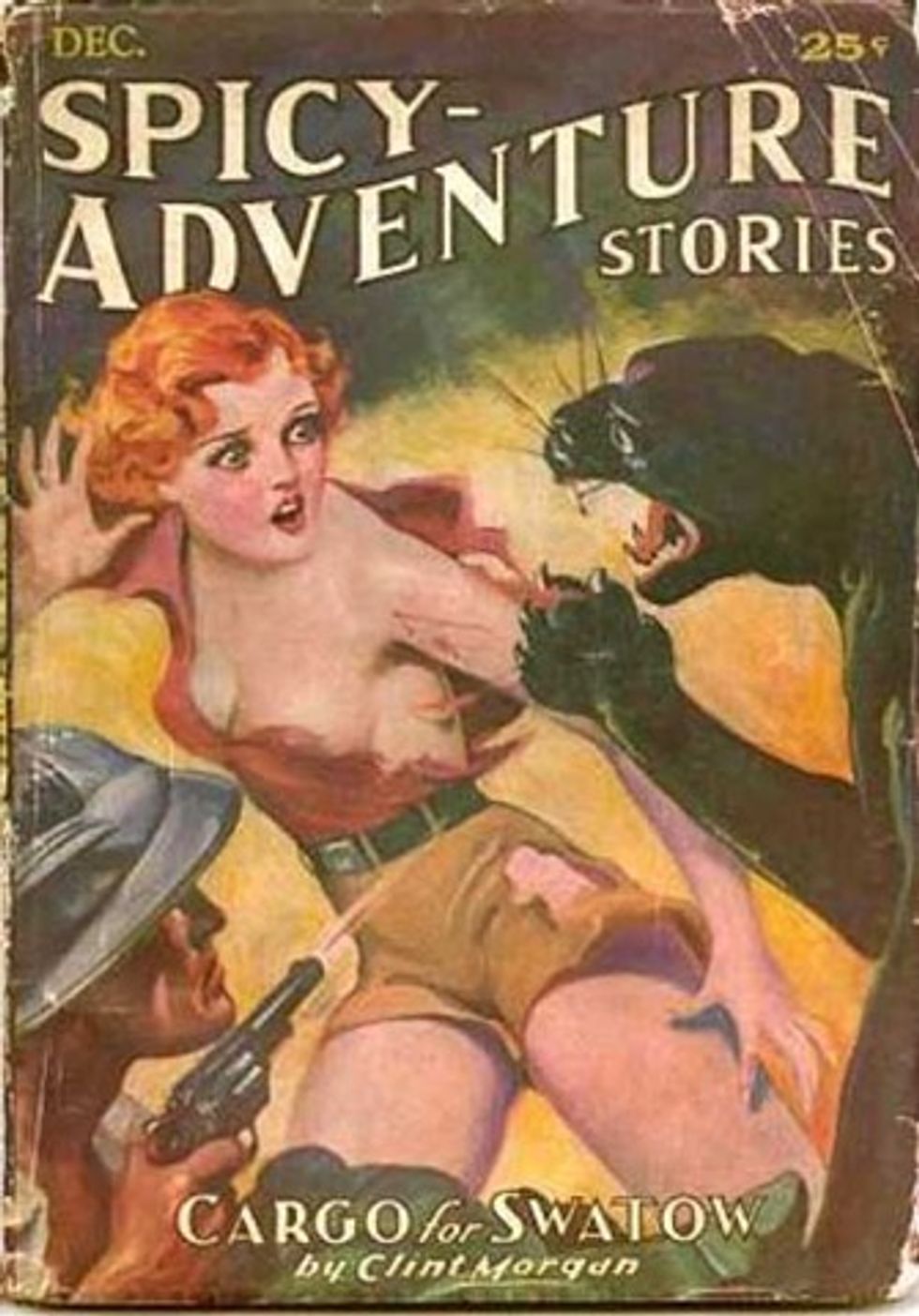 She was tired of her suite of rooms high above the roiling island of Manhattan. She was tired of the same walls every day, the heavy reek of Clairol Nice ‘N Easy and stale gin that permeated the air. She had lately found herself hallucinating, talking to long-dead Republicans who shocked her by talking back. She suspected the chemicals from Clairol were to blame, or possibly the opium, or maybe the long solitary days during which her only companions were her gauzy, soft-focus memories of a better time in a better America. A time when the country was powered by nothing more than grit and the twinkling eyes of a certain Republican president. Ah Ronnie, she thought as she once again slapped a handkerchief over the neck of the brown bottle, which she carefully tilted so that the precious ether inside soaked the delicate cloth. If only you were still here, to remind Americans of the fun we could have!

She needed escape. But to where? A call drifted to her eyes from a great distance. Or perhaps it came from her solid American bones, whispering the same temptation that it had whispered to generations of her fellow countrymen almost from the moment they had first invaded the continent: to the fabled West, land of wide-open spaces, deserts, mountains, clear-running streams, numbered highway exits, oil tank farms. Yes, New Jersey! It lies west of Manhattan, does it not?

So Peggy Noonan set forth, across some bridge or through some tunnel, to join Governor Meatballs on his re-election quest across the state that launched a thousand punchlines.

Mr. Christie is cruising to a big win as a red-state figure in a deep blue state, so he's got a lot to be happy about. But his pleasure in the game and the meaning of the game -- his remembering that on some level it is a game, to be won or lost, to cheers or boos -- is a clue to the mood with which a great party might approach its work. So here we put aside policy questions to take a look at what winning looks like, and sounds like.

Oh, do you know of a great political party somewhere that has work it would even like to approach? We guess screaming “No!” at every policy proposed by President Obama is work of a sort. But let’s not worry about policies and whether they are good or bad and could help people by providing them food, shelter, security, a healthy economy. Because as another great man once said, “Winning!”

A woman at the Ritz Diner in Livingston told why she's for Mr. Christie: "He can get things done because he can go between the aisles. Harry Reid and the president won't even talk to the other side." This was a prevailing theme: a yearning for bipartisan progress, and support for his abilities in this area.

Jesus H. Christ wandering the Pine Barrens, how is this whole “Obama won’t negotiate” thing still a thing? If anything, this shitfuffle of an ACA rollout is partially the result of Obama being too willing to entertain the bugfuck crazy dipwads who have run the Republican Party since his election. Not that they had any intention of working with him on anything, ever. This is abundantly clear to anyone who has not spent every day since 2008 in a laudanum coma.

What changed everything was Hurricane Sandy. Before that he'd been tough, fast, YouTube man, toe to toe with angry teachers. That was his image. After Sandy people saw him as not only a battler but someone they could rely on, who could lead, who was "compassionate." "I think that people got to know me."

Yeah, and conservatives everywhere haven’t stopped blaming him for costing Mitt Romney the Presidency because Meatballs had the temerity to work with President Obama on helping the state in Sandy’s aftermath. This hagiography is not going to play well south of Cherry Hill, Pegs.

"You gotta show up -- regularly, consistently. And you gotta listen. You can't always talk at people, you have to listen."

This is all very well and good for campaigning, but what about governing? According to various sources gathered here, New Jersey ranks 47th in economic growth among the states, 41st in business climate ranking, and has the 7th highest unemployment rate. It has lost a net of 174,000 private sector jobs and lost another 51,000 construction and permanent jobs when Christie canceled New Jersey’s portion of the ARC project. Oh, and his vaunted stabs at education reform have consisted mostly of cutting school funding (no matter what his people told noted education specialist Shaquille O’Neal) and going after the almighty teachers and their unions. Plus he punted on creating a state exchange under Obamacare for no reason we could find beyond either spite or shoring up his credentials with the right for his inevitable presidential run. So New Jerseyites are stuck with the federal government's website, and we all know how well that's going.

Would anyone like to take a guess at which politician Peggy has spent years slagging for being great at campaigning and lousy at governing? Here’s a hint: she slagged on him for this very trait in last week’s column! Whatever could be different about Governor Meatballs, we wonder?

But as the Governor himself told Pegs, “Politics is a feeling.” So the people of New Jersey will have that going for them when Christie wins the election next week in a landslide, which is nice.