Pence Scribbling 'President' All Over His Notebook. Wonkagenda for Tues., Aug. 8, 2017 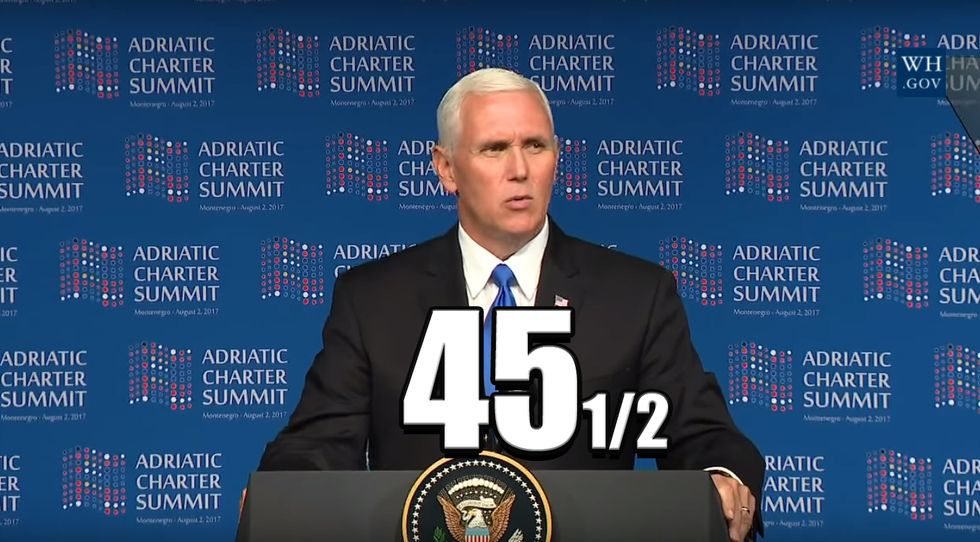 Oh, hi there, Wonkers! We have many newses today, and we can't want to share them with you. Here's some of the things we may be talking about today.

CIA Director and Tea Party crazy Mike Pompeo is trying to force feed rank and file agents Trump love potions, but not everyone is drinking the Flavor-Aid.

An draft report on climate change leaked to the Times from 13 federal agencies says that we are currently experiencing climate change, and humans aren't exactly helping. The Trump administration and the EPA declined to comment.

Big businesses in the finance and manufacturing sectors are beginning to get cold feet about investing until it's clear whether or not Trump and congressional Republicans will actually start initiating tax cuts.

Instead of giving the steel and beef industries those deals he promised, Trump wants to accuse China of intellectual property theft and drop some tariffs on Not America. Nothing says negotiation like swallowing your own grenade.

Who are those super secret mystery businessmen Trump asked to write his deregulation policies? Some work for airlines and car companies, and the rest are, "components, not particular employees,” which we can only suppose is code for killbots.

There's a reason why you're suddenly being told to buy the expensive brand name pharamceuticals. To be fair, it's not a good reason, but at least it's an excuse.

The FDA wants you weirdos to stop having three-parent babies and go back to old fashioned one-on-one sexytimes like Jesus intended.

The slapfest between Trump and Sen. Richard Blumenthal probably won't be the dumbest story you'll read this morning; one of these men was a Marine reservist and one had foot ouchies.

Stephen Miller can spot a cosmopolitan elitist when he sees one. After all, Miller grew up in Santa Monica and now lives in a million dollar condo in one of the DC's wealthiest neighborhoods that bills itself as "the new ideal for sophisticated, modern, urban living."

Russian bots are beginning to target Paul Ryan with mean tweets right as he's gets back to Wisconsin to hide from his constitents.

Trump is the most lying liar in the history of elected liars ever. BIG WIN!

Mar-a-Lago is barely meeting the legal hiring requirements so that it can "You're Hired" a bunch of temp foreign workers from Not America, and as Trump said on the campaign trail, he's "taking advantage of that."

Trump's base is falling out according to a new poll from CNN that is corroborated by a slew of new polls that show his disapproval ratings up around 60 percent. LOW RATINGS!

As Mike Pence runs around the world cleaning up after Trump, Republicans are quietly writing first drafts of "President Pence" fan fiction, unless you're Frank Luntz who thinks, "that's a thought experiment that gets you killed."

Jeff Sessions is shocked and appalled that the people of Chicago could be so rude to him and rebuke his sanctuary city policies. Why, one gets the impression that the city of Chicago would rather drown in its own blood while giving him the finger than to roll over and beg for money.

College Park, MD, a suburb of Washington D.C., is considering allowing undocumented residents to vote in local elections because they think ILLEGAL people should have a voice in their own trash pick-up and snow removal.

The tale of "Nicole Mincey" is a weird rabbit hole that has ends with bootleg pro-Trump crap and identity theft, but starts with Trump's twitter account.

Pat Robertson thinks there might be a conspiracy to get rid of Fox News and all its culture of grab-ass since they keep losing talent to sexual harassment claims. Bless 'yer heart, old man.

Peter Thiel has been souring on Donald Trump; maybe he'll use some of his megabucks to find the pee hooker tape?

According to some Fox News blowhard, having morals that don't involve blasting off dick pics and stepping over people like an Ayn Rand novel makes you a fascist asshole.

And here's your late night wrap-up! Stephen Colbert is freaked out about Eric Bolling fucking in his glass house; Seth Meyers took A Closer Look at Trump's vacay; The Daily Show had Jordan Klepper explaining why it's great that Not America can't stand Trump; James Corden noticed Trump celebrated his 200th day in office by not working.

How about this, you give us some Ameros, and we'll give you some newses, Nice Times, and the occasional drinky thing? Deal?