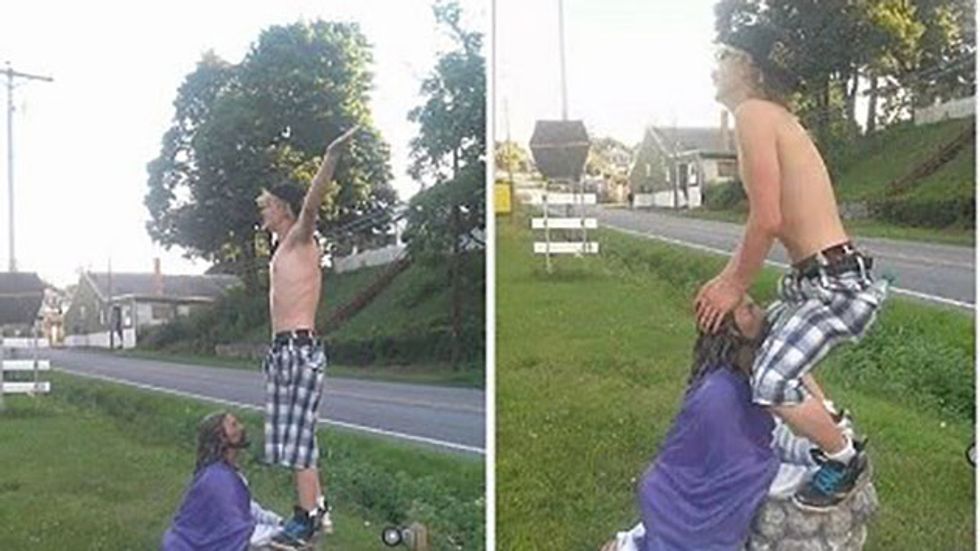 A Pennsylvania teen is getting an education in morality and jurisprudence after he posted photos of himselfpretending to do oral sex with a statue of Our Lord And Savior, Jumped-Up Jesus H. Face-Fucker. The young miscreant, a resident of Everett, Pennsylvania, posed with a statue in front of Everett's Love in the Name of Christ nonprofit, posted the pics to Facebook, and was eventually reached by the long arm of the law, although the photo is not obscene (while shirtless, the kid is wearing baggy shorts which fully cover his Sin Parts) and the statue was not damaged. There's no physical desecration, so this is no "Piss Christ" or "Bukakke Jebus." Even so, this simulated oral violation of the Lord calls for some simulated justice!

So even though no tangible crime occurred, and even though America remains free of sharia law, allegedly adult officials in Bedford County have charged the young man with "desecration of a venerated object," under a well-thought-out 1972 law that prohibits "defacing, damaging, polluting or otherwise physically mistreating in a way that the actor knows will outrage the sensibilities of persons likely to observe or discover the action." The maximum penalty under the law is two years in juvenile detention, which ought to teach the whippersnapper to not wave his wangdoodle in the simulated faces of inanimate objects.

Honestly, we're sort of happy to see this case, not simply because it allows us to type "Jesus blowjob" now and in follow-up stories, but also because if the kid gets any decent kind of legal representation, we'd like to think there's a fair chance that the idiotic law will be thrown out as a broad violation of the First Amendment, both under the Establishment Clause (who gets to decide what is and isn't a "venerated object," anyway?) and of course on free speech grounds as well. As Mother Jones's Sam Brodey notes, the Constitution is pretty clear on this, stating "Congress shall make no law abridging the right to hump a statue of Jesus."

Since the suspect is a minor, his name has not been released, which rather frustrated Yr Wonkette's efforts to establish the Pennsylvania Teen Jesus Face-Fucker's Legal Defense Fund. Probably just as well, since we're not sure we'd want to handle any of our filthy readers' "contributions."