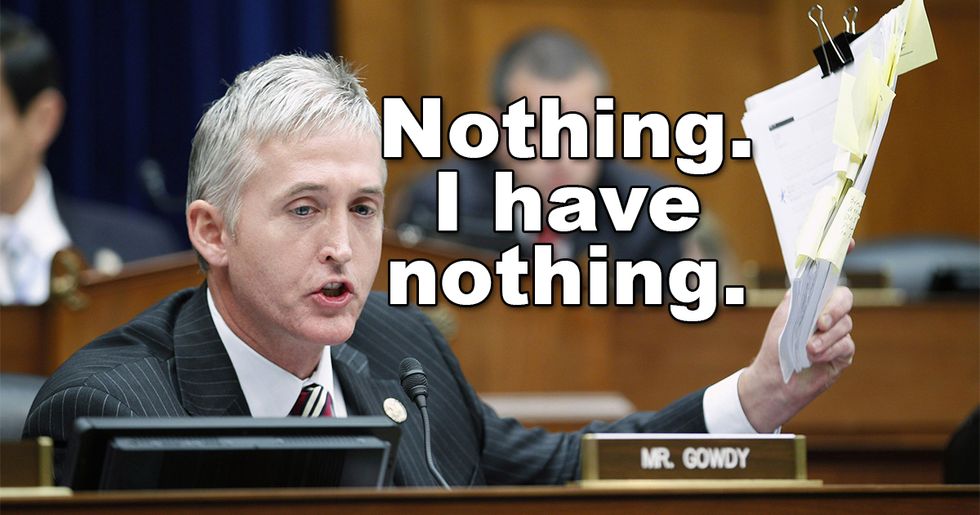 By now, we all know what happened that fateful night in Benghazi. Hillary Clinton made FOUR DEAD AMERICANS while she ate bon bons and phone-lesbianed Huma Abedin, because she was home alone THE WHOLE NIGHT that night. She also brought Vince Foster back to life so she could send him to Benghazi so she could murder him, and then she did a shady Whitewater land deal, and made an email to Sidney Blumenthal that just said "LOL doin' Benghazi right now" and Bill Clinton didn't care because Monica Lewinsky was giving him a hummer right then and he was busy.

[wonkbar]<a href="http://wonkette.com/595254/what-the-benghazi-hearing-taught-us-republicans-are-dicks-hillary-already-president"></a>[/wonkbar]And Rep. Trey Gowdy (R-Dumbass) KNOWS this happened. He just can't prove it. He admitted that his hilariously awful Benghazi hearings produced No New Information which would render Hillary #guilty. In fact, he just ended up looking like a whiny ass titty baby, and made Hillary look Presidential As Fuck. But Gowdy didn't give up. He is still investigating Benghazi, because one of these days, he's going to find his smoking gun and YOU'LL SEE!

Well, apparently the Pentagon is officially tired of Gowdy's shit. The Department Of Defense sent him the bitchiest letter ever, for us to LOL at. Here's an excerpt:

In case you can't click on the letter to read it in all its pissy glory, because your boss thinks PDF files are NSFW, or if you are just lazy, here are some key phrases that will give you an idea of the overall tone:

Do you sense the SEETHING PISSED-OFF-ITUDE contained in this very polite and official letter? In other words, they are staying STOP fucking wasting everybody's time, STOP wasting taxpayer money, STOP bothering people, and go the fuck away, Trey Gowdy, you pitiful fucking man-child.

[wonkbar]<a href="http://wonkette.com/595257/rep-elijah-cummings-america-is-a-better-country-than-this-benghazi-hearing-bs"></a>[/wonkbar]And why do we have this letter? Because the Democrats on the House Benghazi Committee released it, because you just know Rep. Elijah Cummings (D-Badass) and the other Dems on the committee are even more sick of this shit than the Pentagon is.

[wonkbar]<a href="http://wonkette.com/583694/gop-will-release-benghazi-report-in-2016-to-help-hillary-clinton-obviously"></a>[/wonkbar]But Gowdy and his moronGOP pals are almost finished with the investigation finally and will finally derail the 2016 election by proving Hillary is the real murderer, so that Donald J. Trump can be president of bombing the shit out of things. Gowdy did say last year that he figured they'd release their report this year, not that there's anything political about his investigation, heck no. Oh look, here is an article in The Hill that says they're getting "close" to spooging out the results of their exclusive investigation (and by "exclusive" we mean the LITERALLY EIGHTH BENGHAZI INVESTIGATION), so maybe this will all be over soon?