[contextly_sidebar id="z8qEkkScpNRuVHAKMYIySkMPCZoJgisl"]Donald Trump The Campaign released a very classy video Monday in which Donald Trump The Candidate defended against claims that Donald Trump The University was little more than a series of high-pressure sales pitches for pricey but worthless real estate seminars. Two class-action lawsuits in California and a fraud suit by New York Attorney General Eric Schneiderman are still moving forward, so Donald Trump The Defendant explained in the video that there's absolutely nothing to all these claims of fraud, so please shut up about Trump "University" now, OK?

In what has to be a first in the history of presidential campaign ads, Trump calls out two of the plaintiffs by name and says their accusations are without merit, because they signed class evaluations rating the seminars as "excellent." (Both plaintiffs appeared in anti-Trump ads sponsored by the American Future Fund, a conservative outfit with connections to the Koch Brothers.) Trump holds up the plaintiffs' actual evaluation forms, and darned if they don't have "excellent" circled again and again, or a series of positive comments. Ergo, says Trump, there's absolutely nothing to the lawsuits -- and presumably nothing to the 150 affidavits filed in the New York fraud case, although he doesn't mention them. Trump insists, as he has in two Republican debates, that 98 percent of student evaluations were similarly glowing, so obviously these lawsuits are merely sour-grapes complainers trying to get money from Donald Trump The Real Victim.

When they are on the stand, they will be showing [sic] and shown these reports ... Why would anybody settle a case when we have reports like this? I just can't do it.

Then Trump explains that he will fight his enemies -- people who accuse him of defrauding them -- exactly like the United States should fight its enemies:

The plaintiffs should be grateful that all Trump did was to name them in a campaign video, opening them to harassment from the Trump Flying Monkey Brigade. At least he didn't call for them to be waterboarded.

[contextly_sidebar id="aFwCXcI3ATdLFhvk6Yo02nZmOyoQhR52"]Those "excellent" student ratings are, as we've noted before, full-on bullshit. The class evaluations were not anonymous, and instructors routinely pushed students to give high evaluations so they'd qualify for more wonderful instruction and special deals. In fact, plaintiff Robert Guillo, whose evaluation Trump holds up in the video, said he was pressured to give the seminar a high score,

because he was encouraged to believe that that was the only way he could receive a certificate of completion for the courses he took. “The evaluations did not reflect my actual opinion of the courses,” he said in the affidavit.

Imagine that. You'd think a great master of facts like Donald Trump would know already what the plaintiff will be saying when he takes the stand, no? The other plaintiff mentioned in the ad, Kevin Scott,

said he filled out a positive evaluation because he did not think the problems with the program were the fault of the mentor.

And indeed, the form that Trump waves around in the ad is an evaluation of Scott's individual mentor and one "field training session" taught by that mentor, not of "Trump University" as a whole. You know, if you wanted to get into the details, like they will when the case goes to trial. In a rare score, the ads in which Guillo and Scott appear were rated truthful -- OK, a "Geppetto" -- by WaPo's Fact Checker column.

Finally, one more fact-check on the ad: Trump insists that at the March 3 Fox News debate, the moderators lied about the Better Business Bureau's rating of Trump University, a matter examined in detail by PolitiFact. According to Trump, Fox's Megyn Kelly was lying out of her whatever when she said the BBB's rating was a "D-":

I said that's not true, it had an "A" ... well, I turned out to be right. Before the end of the debate, I gave them the "A," we had it sent to us, and here's the "A" rating from the Better Business Bureau, and they refused to put it on that night. They probably said it some other time when no one was listening. So we have an "A" rating, not a "D minus" rating.

Trump then holds up this partial view of a website screenshot, which you might want to note is undated; Trump tweeted the full screenshot after the debate Thursday. And by golly, there is indeed an "A" on there: 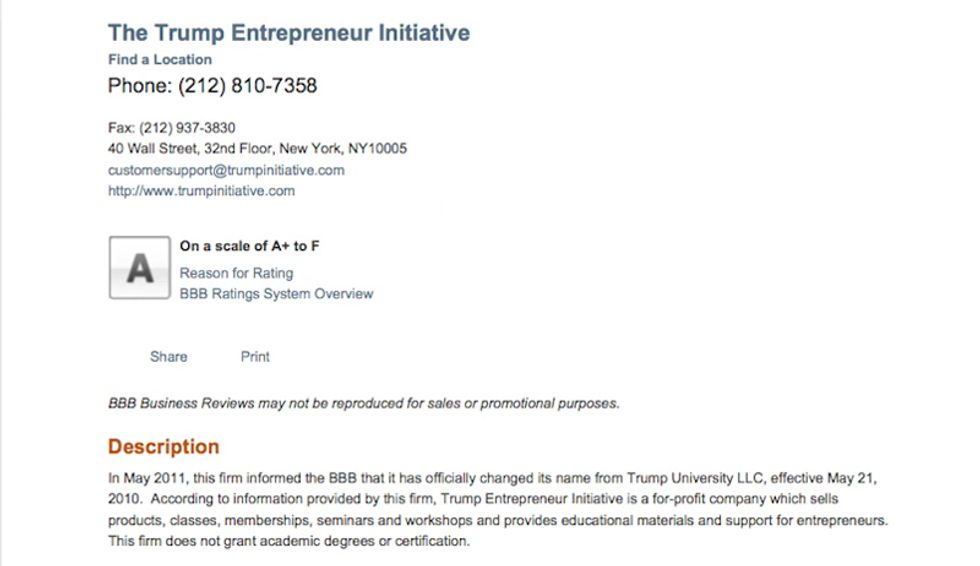 Oh, Donald. You are so wonderful. As PolitiFact pointed out, the BBB actually had scores that ranged all over the place, so you're right, AND Fox was right:

Katherine Hutt, director of communications for the Council of Better Business Bureaus, said that as a matter of policy, they don’t provide any ratings from previous years. But the organization issued a statement that "Over the years, the company’s BBB rating has fluctuated between an A+ and a D-."

We don’t know when the bureau might have given Trump University a top grade, but based on the Internet Archive, the last time the Better Business Bureau gave the university any rating at all was 2010, when it give it a D-minus. That assessment showed up in plenty of news articles.

Furthermore, a statement issued Tuesday by the Better Business Bureau attempts to sort out some of the competing claims, or at least to clarify its own ratings and how they came to be. A few highlights:

2. Trump University does not currently have an A rating with BBB. The BBB Business Review for this company has continually been “No Rating” since September 2015. Prior to that, it fluctuated between D- and A+.

3. The document posted on social media on Thursday night was not a current BBB Business Review of Trump University. It appeared to be part of a Business Review from 2014.

4. BBB ratings are based on information we obtain about a business, including complaints received from the public. The reporting period is three years [...]

So that explains why Trump could hold up a screenshot of an "A" rating: By 2014, Trump U was only a fading memory, and no new students were being scammed. Miraculously, as the complaints rolled off its record, Trump U's score went up.

What Donald Trump is really saying is that once it stopped ripping people off, nobody complained about Trump University. And this is how America should fight its enemies: with half-truths and outright lies. Victory is assured, at least in the YouTube comments.

Pompeo Attempts To Stick Up Reporter, Winds Up Shooting Himself In The D*ck

And Then The Saints Came Marching In