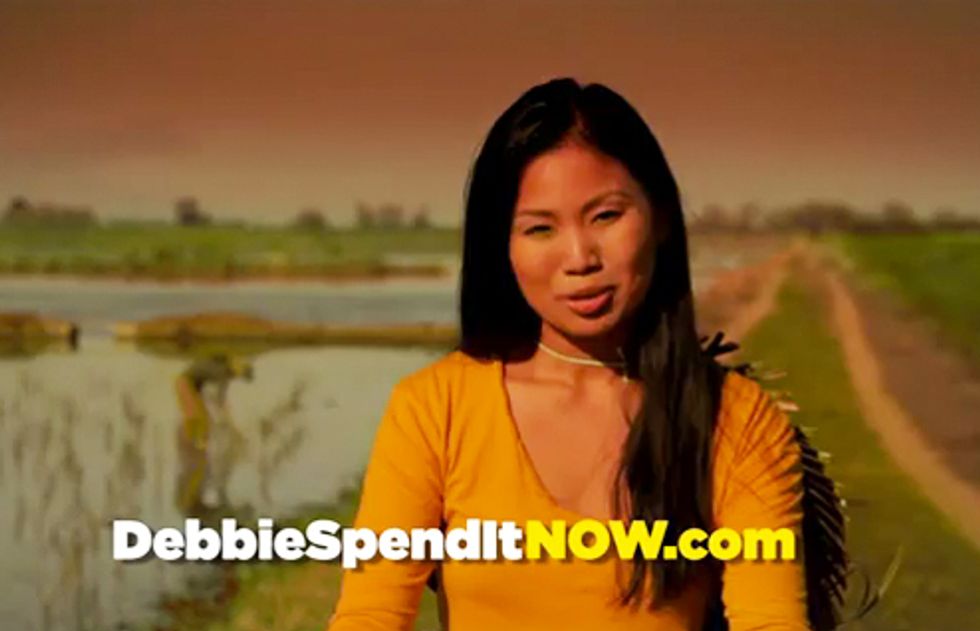 Admit it, cynical, smug blog reader: You thought thatPete Hoekstra's Senate ad about "Debbie SpendItNow," featuring an Asian lady riding a bicycle through Asian rice paddies and taunting Michiganers about how lazy and jobless they are through her cartoonish broken English, would be one of those things where the lamestream media shouted "racist" and "completely offensive" while Hoekstra's popularity numbers nevertheless rose astronomically as a populist backlash to the lamestream media shouting "racist" and "completely offensive." You thought there would be an excellent chance of this happening, since nothing good ever happens in American politics. And yet Pete Hoekstra is now comically unpopular! What a world.

Public Policy Polling shows what can happen when you release a dumb lying racist ad and for whatever reason -- awfulness? -- it doesn't "click" with the public:

What's interesting is that Stabenow's approval numbers have barely budged at all over the last 6 months. Over the summer we found her at 46/40, and now she's at 47/41. But Hoekstra's numbers have taken a turn for the worst. In July his favorability was narrowly positive at 31/30. Now he's dropped a net 11 points to a -10 spread at 28/38. There hasn't been a big shift in his numbers with Democrats or Republicans but with independents his numbers have flipped from +10 (33/23) to -10 (29/39).

Hoekstra appears to have been damaged by his controversial Super Bowl ad. 54% of voters in the state were familiar with it, and within that group 45% said it made them less likely to vote for him compared to only 16% who considered it a positive and 37% who said it didn't make a difference to them either way. Independents said they were turned off by it and he's gone from leading with them by 6 points in July to now trailing by 4 points.

He's still crushing his lackluster rivals in the Republican primary -- although it's down to a 33 percentage point lead over his closest competitor from a 67 (!) percentage point lead -- which really raises some questions about his campaign management. Why would you run a vulgar race-baiting ad during the Super Bowl when you've most likely got the Republican nomination wrapped up and need to keep independents on your side for the general election? Maybe he's running some sort of ironic art project?