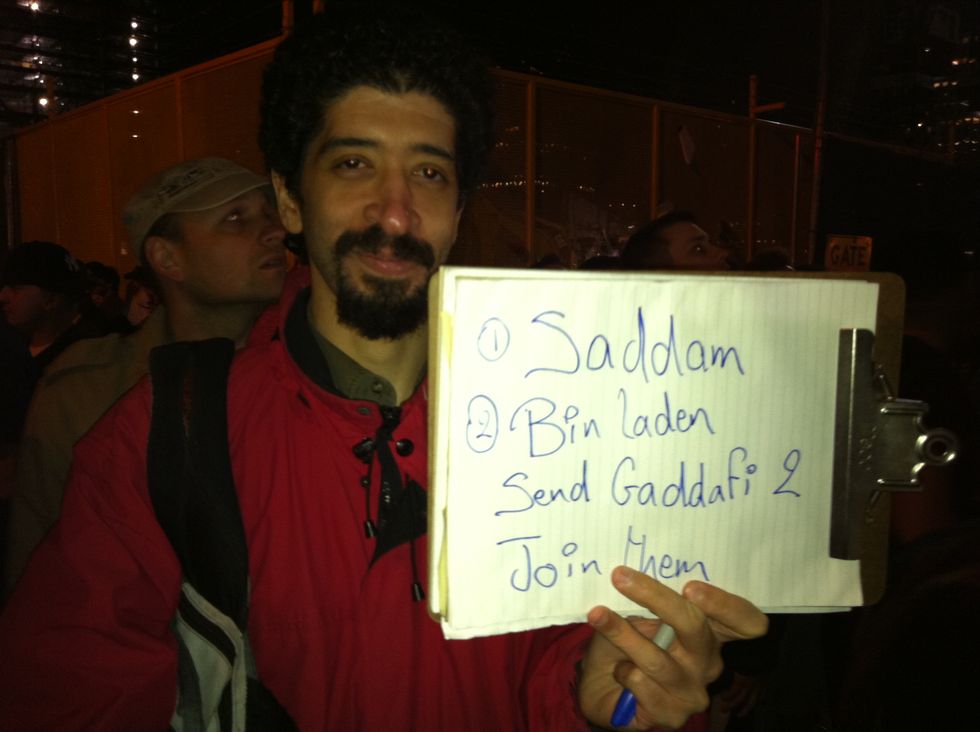 Last night, Americans heard the news about Osama bin Laden and flocked to the site where the World Trade Center once stood. And they arrived on this hallowed ground, they held up signs, tried to get themselves on teevee, and yelled celebratory chants, including "SEND THEM HOME." But most of all, these people got drunk. And some of them also smoked marijuana. And then Don't Ask, Don't Tell opponent Lt. Dan Choi showed up for some reason. Uh, okay! We were there and took some photos of the celebration.

Here is your editor and Choi. Why exactly was Choi there? We're not sure. Because there were teevee cameras? He, for one, wasn't pounding beers, which was strange.

Here's a guy being thrown in the air and... hey, isn't that a Teabagger flag? Actually, it didn't seem to be held by a Teabagger, so maybe the Gadsen is finally being reclaimed by the rest of the country?

NYPD was on the perimeter and pretty much letting anything go on in the crowd; thus, everybody had a beer in his or her hand. Even this couple, who were older than most of the crowd.

What was once covered in human remains is now covered in empty beer cans and vomit. Yay? We won? Umm.

It's tough to see from the photo, but those are joints. For confirmation, though, you can see that this gentleman on the right is wearing a bath robe.

Some bagpipers played "Amazing Grace." The crowd dropped their beers and lifted up their cameras.

The one little sign gracing the fence around the WTC site. It couldn't quite cover up the sight of the giant lot where there once stood two great towers full of people.

This woman was wearing an Obama button. Funny, we didn't see any Mitt Romney or Tim Pawlenty campaign gear among the crowd. (He's getting re-elected, in case you can't tell.)

This woman looked through her clothes, saw the Obama inauguration t-shirt, and thought to herself, "America."

There were some signs! This person wanted everyone to think people were cheering for something other than Bin Laden's death, even though that's exactly what they were doing.

Our verbs are gone, but not forgotten.

For those at home following America's various wars, this man made a handy checklist.

This blonde (is there any other kind?) Fox News reporter seemed flustered. Maybe it was the Obama poster staring at her?

A worker at Ground Zero looks at the crowd through the fence, which was a place where people saw fit to stash their empties. May as well, huh? Seems like a good place to put your trash. Nothing special. Anyway, hooray, death!