Please, Keith Davidson, Tell Us More About How Michael Avenatti Has BESMIRCHED YOUR HONOR! 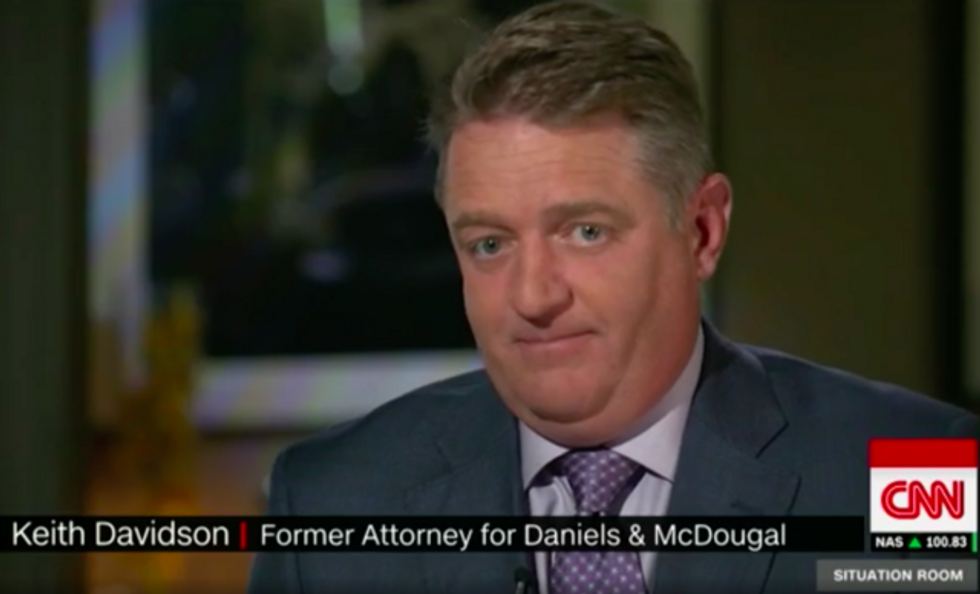 When last we left the crime scene, Avenatti had just filed suit against Cohen and Davidson, alleging that they conspired against Davidson's former client Stormy Daniels. And he had the texts to prove it!

Davidson responded by saying he considered the suit a "full and complete waiver of the attorney-client privilege." Which is ... not how that works. And yesterday, Davidson sued Daniels and Avenatti for slandering him and ruining his very good name. To which your Wonkette says, "LOLOLOL! Good luck, buddy!"

This is a guy who got Charlie Sheen to fork over $2 million to keep his HIV status quiet. Davidson's own client, adult film actress Kira Montgomery, says he encouraged her to take photographs of Sheen's medications because, "It'll help your case."

This is a guy who narrowly escaped indictment after the FBI caught him trying to sell a stolen sex tape to wrestler Hulk Hogan. The Smoking Gun reports that the infamous Gawker clip deliberately omitted the portion of the tapes where Hogan used racist slurs:

While viewing the tapes, [Hogan's attorney David] Houston said, Davidson made a comment to the effect that, “The tapes that were released were the shot over the bow, but not the shot that would take the ship down.”

This is a guy who made his living selling celebrity sex tapes and diaries, including of Paris Hilton and Kanye West.

This is a guy who told an undercover FBI agent that his business mainly consisted of closeted gay people paying handsomely to avoid being outed.

SO WEIRD that he's representing himself pro se in this action to recover for damage to his absolutely sterling reputation!

But Davidson is nothing if not ballsy. He's also suing Michael Cohen for secretly recording their phone conversations in violation of California law. Yes, a lawyer who makes his living selling surreptitiously recorded sex tapes has been grievously injured because Michael Cohen violated his privacy. We anticipate Davidson's imminent arrest for MURDERING IRONY DEAD.

Davidson's most credible allegation against Avenatti pertains to this tweet.

Keith Davidson should have been charged after his arrest for extortion not long ago. He is a disgrace to the profession. Watch him now try and distract away from his own unethical conduct. Ms. Daniels deserved better. https://t.co/wd6rfnFCuQ via @thedailybeast

In point of fact, Davidson seems not to have been arrested after the FBI sting operation where they caught him telling Hulk Hogan, “I don’t know if [the sex tapes were] stolen... And, quite frankly, I don’t want to know if they were stolen.” But, please, tell us more about mean old Michael Avenatti ruining your good name, Keith!

Avenatti responded by publishing a Dropbox compilation of Davidson's greatest ethical hits, including the 90-day suspension of his license to practice law in 2007 for failing to properly represent two medical malpractice clients and for assorted, ummm, ooopsies with his client trust account. So there's that!

Here are the documents relating to Keith Davidson's prior suspension by the California State Bar. Among other things, he mishandled a brain injury case for a young boy. Completely unethical. https://t.co/rNxQFr075X

You can read all about Davidson's extra-super-ethical history in this long piece by William Bastone at The Smoking Gun.

And now Yr Wonkette will go do some deep breathing exercises and try to forget that these assholes made us read about Bubba the goddamn Love Sponge.

Please click here to give us money for brain bleach! These people are NASTY!