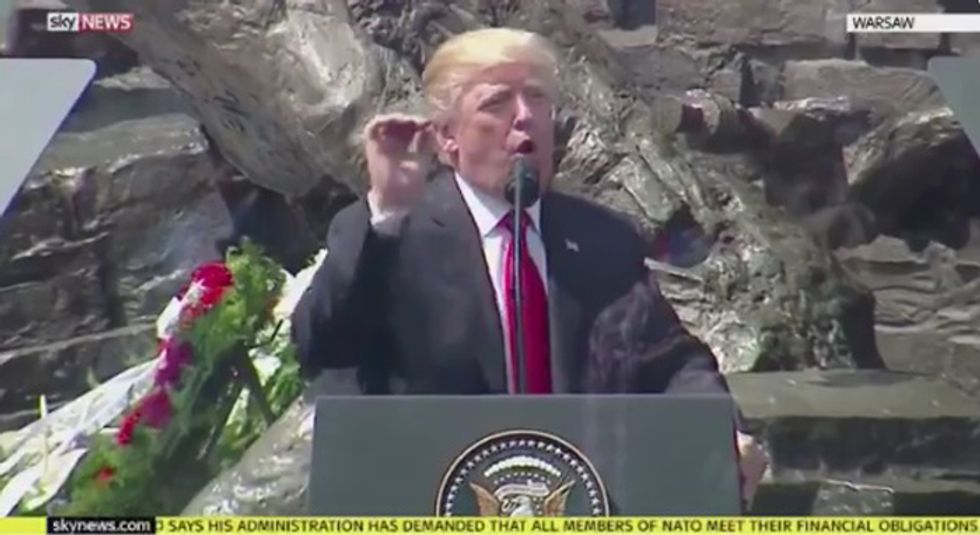 We will defend ALL who hold their fingers together in a little circle!

Donald Trump gave a very nice speech from a teleprompter today in Warsaw's Krasinski Square, a memorial to a 1944 uprising against the Nazi invasion, and the crowd went wild for him, excitedly chanting "Donald Trump! Donald Trump! Donald Trump!" Which was exactly what they were supposed to do: In arranging Trump's visit, Poland's rightwing government promised that Trump would have crowds cheering for him. To make sure of it, the government bused in people from all around the country, a technique borrowed from old-time communist days.

Repeatedly, throughout a speech in which the president recounted Polish history to the visitors, waiting people chanted "Donald Trump" and repeatedly interrupted him to do so.

Much of the crowd was brought in from across the country, and carried signs saying where they had come from – including "Pila" or "Gorzow" in the west. Other banners featured the right-wing, pro-government Gazeta Polska newspaper.

Wow, if that isn't a spontaneous demonstration of the Polish people's deep love of Donald Trump, we don't know what is. The Law and Justice Party instructed all its members of parliament and other party leaders to bus in at least 50 people each so that Trump could look forward to a warm reception. No doubt he will remember it fondly, and will cite the massive cheering crowd to disprove the Fake News in a recent Pew Research Center poll showing that while 73 percent of Poles have a positive view of the USA, only 23 percent said they have confidence in Trump as its leader, compared to 58 percent for Barack Obama. That can't possibly be an accurate Pole poll. Just listen to the cheering!

Crowd in Poland chants 'Donald Trump' after POTUS declares "The West will never, ever be broken. Our values will prevail." pic.twitter.com/VWptngFf75