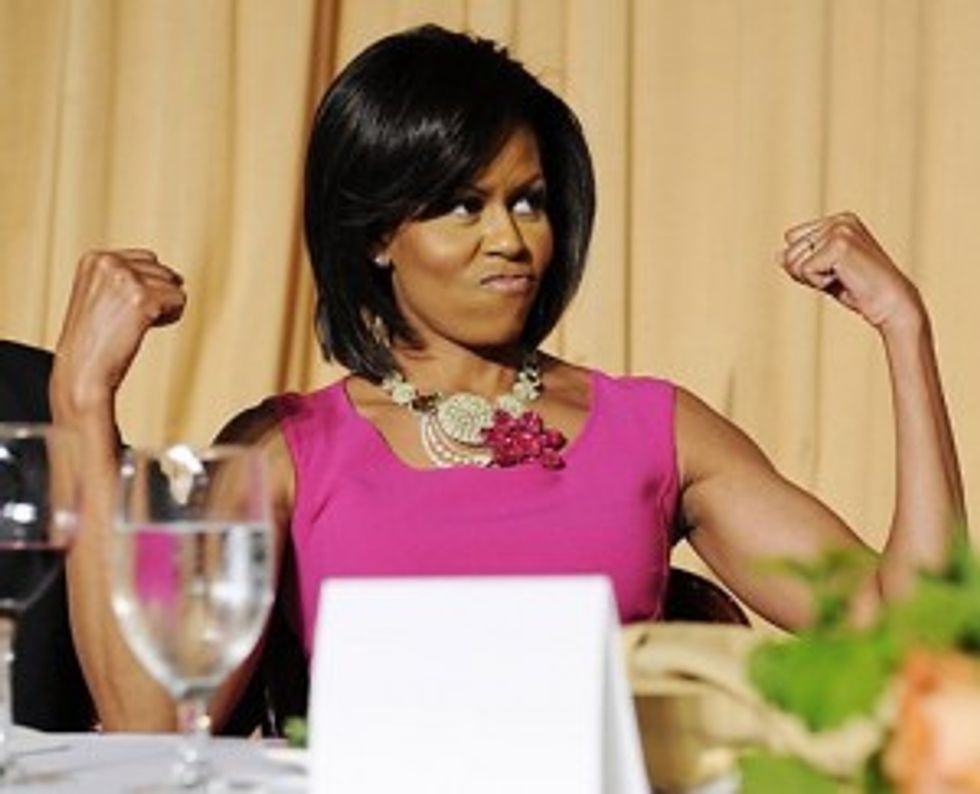 Michelle Obama, you are UNDER ARREST on the charges of being a BAD FEMINIST! You have the right to remain silent; anything you say will lead you to be fucked if you do and fucked if you don't. You have the right to an attorney, if you can even find one, since all the attorneys are hairy-legged spinster career womyn from Wellesley who hate women who give up their cool jobs to be "mom in chief" and also want to murder them probably, andno jury would ever convict.

What's up, Michelle Cottle writing at Politico? Do you got some feminists to pit against some other feminists, to call each other bad feminists? Oh boy, we CANNOT WAIT.

[The higher education gap], finally, was an issue worthy of the Ivy-educated, blue-chip law firm-trained first lady, a departure from the safely, soothingly domestic causes she had previously embraced. Gardening? Tending wounded soldiers? Reading to children? “She essentially became the English lady of the manor, Tory Party, circa 1830s,” feminist Linda Hirshman says.

Oh, we get it! Linda Hirshman is a giant asshole!

But did Michelle Cottle find other giant assholes to talk about Michelle Obama and how disappointingly retrograde it is that she's focused on children's nutrition and health in light of the American obesity epidemic, not to mention food deserts that disparately impact children of color?

Sure she did! She found so many giant assholes!

Early in Obama’s campaign last year, columnist Leslie Morgan Steiner, author of Mommy Wars, grumped, “Are fashion and body-toning tips all we can expect from one of the most highly educated First Ladies in history?” Observed Steiner, “I for one have seen enough of her upper appendages and her designer clothes, and read enough bland dogma on home-grown vegetables and aerobic exercise, to last me several lifetimes.”

There are some other assholes too, but we got bored, and also, frankly, we agree with some of the assholes. Emily Bazelon? Yeah, that "I'm mom-in-chief" at the DNC bummed us out too, ick, but it wasn't the end of the world, it was just some dumb pander. Unless you consider it this way: that Michelle Obama wasn't just talking about momming her own girls, Mamie Eisenhower-style, but momming the whole country -- with the warmth and open (toned) comforting arms with which she greets all kids and grownups everywhere. Like, that is kind of impressively ballsy earth mother Gaea shit, crowning herself Mother of America. That is super-feminist! That is so feminist I feel like we could all be doing a naked midnight crone ceremony in the mountains somewhere, under a full moon, for Wicca!

Keli Goff? Yes, it would be great if Michelle Obama were able to really speak out on issues disproportionately affecting African Americans (besides food policy, which we will remind you IS FUCKING IMPORTANT and also DISPROPORTIONATELY AFFECTS AFRICAN AMERICANS). But don't we all know that Michelle Obama would if she could, but that America would FREAK THE FUCK OUT?

What the fuck do these women think Michelle Obama can do? As "uncontroversial" as healthy eating and exercise are, 40 percent of the country is now againstdrinking water because Michelle Obama suggested we drink more of it.

So. Is it racist? A little bit. Linda Hirshman provides a definition of intersectionality right there in one of her quotes to try to head off accusations she doesn't understand what it's like for African American women. (Spoiler: she fails spectacularly.) And Keli Goff is African American, but women who are invested in a storyline of "white feminists hate black feminists" will ignore that.

Mostly, it's just a bunch of feminists scratching each other's eyes out, as we do best; we didn't do it to Laura Bush because nobody expected anything from Laura Bush. We did do it to Hillary Clinton, when she gave those dead-eyed White House tours on camera, trying to convince America she wasn't the no-cookie-baking non-Tammy Wynette she'd already admitted to (not) being. Oh the sniping and the carping and the catcalls we whooped at her. There just wasn't Twitter back then.

Basically, we fucking carp at everyone. Feminism is fucking exhausting lately, and we for one think we should go join the Concerned Women for America. We're sure it's a big comfy pile of "do your own thing" and "live and let live."