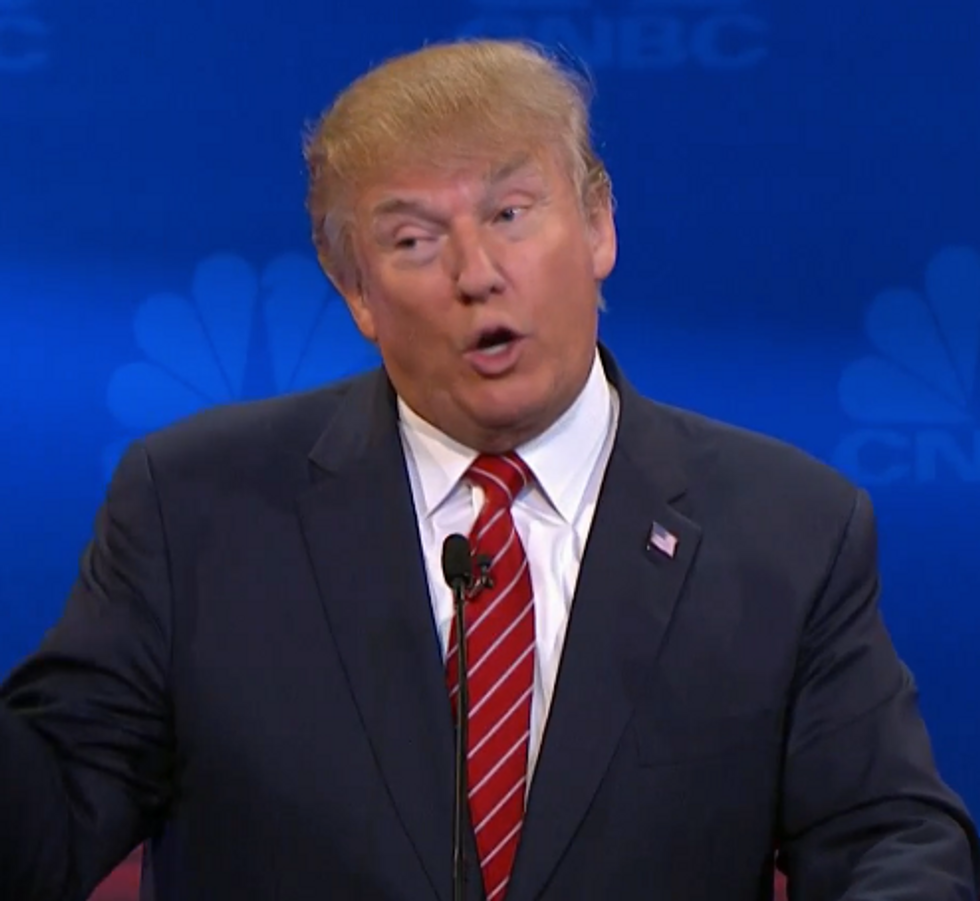 It's an honor just to be nominated

The fact up-lookers at PolitiFact, best known for finding creative ways to label true statements as anything but -- half-true, mostly true, true-ish but not really, true with a smidge of false on the side -- have announced their annual Lie o' The Year. And surprise! For once, it's not something some Democrat said that is completely true, like 2+2=4, but PolitiFact talked to A Numbers Expert who said that while technically accurate, if you were to multiply 37 and 61 and divide by ponies, you'd get an entirely different number, so PolitiFact rates the statement liar liar, eleventeen Pinocchios on fire.

However, this two thousand and fifteen in the year of our derp, PolitiFact rated its own mission, to find the most lyingest lie that has been lied in the last 12 months, far too unpossible, THANKS DONALD TRUMP:

PolitiFact has been documenting Trump’s statements on our Truth-O-Meter, where we’ve rated 76 percent of them Mostly False, False or Pants on Fire, out of 77 statements checked. No other politician has as many statements rated so far down on the dial.

In considering our annual Lie of the Year, we found our only real contenders were Trump’s -- his various statements also led our Readers’ Poll. But it was hard to single one out from the others. So we have rolled them into one big trophy.

While PolitiFact doesn't bother to point out all the other strong competitors of this year, we have no problem reminding the folks at home that 2015 is also the year Carly Fiorina's persona scowled all over the airwaves, saying she watched Planned Parenthood videos that DO NOT EXIST and that President Obama sucks so hard, he retroactively forced military leaders to resign back in 2003. (Fact: Obama was not sworn in as commander-in-chief until 2009. We looked it up.)

[contextly_sidebar id="QpneNZ4efV9Fzrihlc9sz7UsfLNYRTXL"]This is the year Jeb Bush said his brother kept us safe on 9/11, the year Ben Carson informed us the ancient pyramids of Egypt are filled with grain, the year several different nutbags announced the end of the world is RIGHT HERE, including our original one-L crush, Michele Bachmann, who said -- in April -- that Jesus is due to arrive any second now, yippee!

And yet. Donald Trump's lies -- about the Mexican government's secret plan to send all its rapists to us; about the thousands of New Jersey Muslimites who celebrated 9/11; about unemployment rates and polling numbers and whether he was totally talking about Megyn Kelly's vahoosit hole when he accused her of bleeding from her "wherever" -- they are SO the yoogest, most brilliant, terrific lies this year that none of the other lies ever stood a chance.

Molotov to you, The Donald, for lying so many lies, so very hard, that even PolitiFact has been literally (half true) overwhelmed by the sheer weight of all of your lies, each of which is, in its own way, the best most terrific lie ever told. May your medal be beautiful and made of gold.