Half of Republicans Don't Know What 'G.O.P.' Means 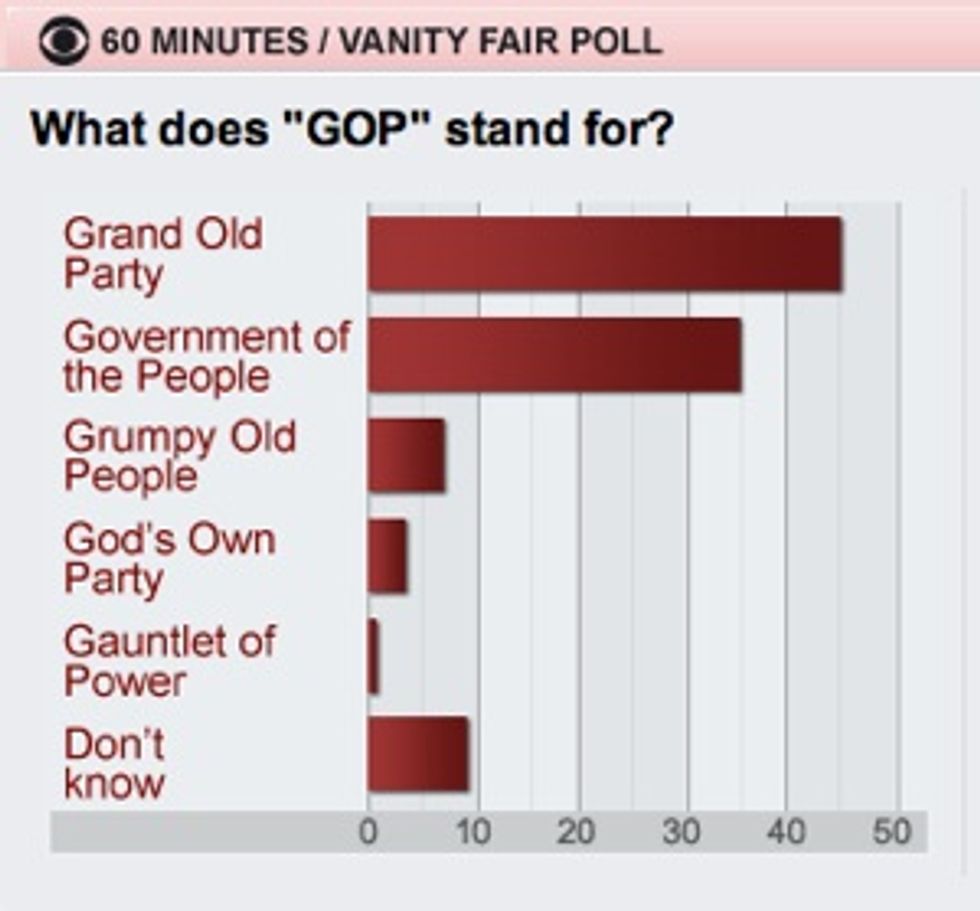 It's time for the greatest scientific barometer of America's intellect, the Vanity Fair/CBS News poll of dingbat potpourri questions thrown at a representative sample of Americans who haven't had their phone lines turned off by Verizon yet. What did our pollsters askthis time? To be weird, instead of asking a series of completely random questions, they focused on "Things Republicans Don't Know." For example, you'd think Republicans might know what "GOP" stands for, as they've all got those "GOProud" stickers on their repo'd Ford Expeditions. But they have no idea, and most probably pronounce it as a monosyllabic grunt, to ask for another microwaved styrofoam plate of CostCo "rib-meat bitelets." This may be the best survey of America yet!

Republicans also can't keep track of who we're supposed to HATE, because it's so confusing since Reagan and Bin Laden tricked the Soviets into going to Afghanistan, to die as an empire, just like we did these last 10 years. So, to be safe, most Republicans still want to nuke the Soviets and also see Saudi Arabia as an actual Enemy of America that we are having wars against, even though the Holy Kingdom of Saudi Arabia is George W. Bush and Dick Cheney's favorite ally in the War Against Muslims. The way Republicans see the world, you'd think Saudi Arabian terrorists successfully attacked New York and the Pentagon and totally terrorized the whole country into submission! (Oh wait ....)

From the Vanity Fair press release:

ALMOST HALF OF REPUBLICANS THINK BOTH RUSSIA AND

LAS VEGAS CONSIDERED THE MOST DECADENT CITY IN THE U.S.

JUST MORE THAN HALF OF REPUBLICANS KNOW WHAT “G.O.P.” STANDS FOR

Just more than half of Republicans (51 percent) and 45 percent of Americans overall correctly identify the meaning of “G.O.P.” as Grand Old Party. The second most popular choice, with 35 percent of the overall vote, was “Government of the People.” “Grumpy Old People” received 7 percent of the vote, “God’s Own Party” 3 percent, and 1 percent thought the abbreviation stood for “Gauntlet of Power.”

Okay, unfair, survey people! You are not allowed to just make shit up because of course a fraction of people will say "Yep that sounds right" no matter what you say. Unfair. Uncool. [Vanity Fair/CBS Poll Thing]