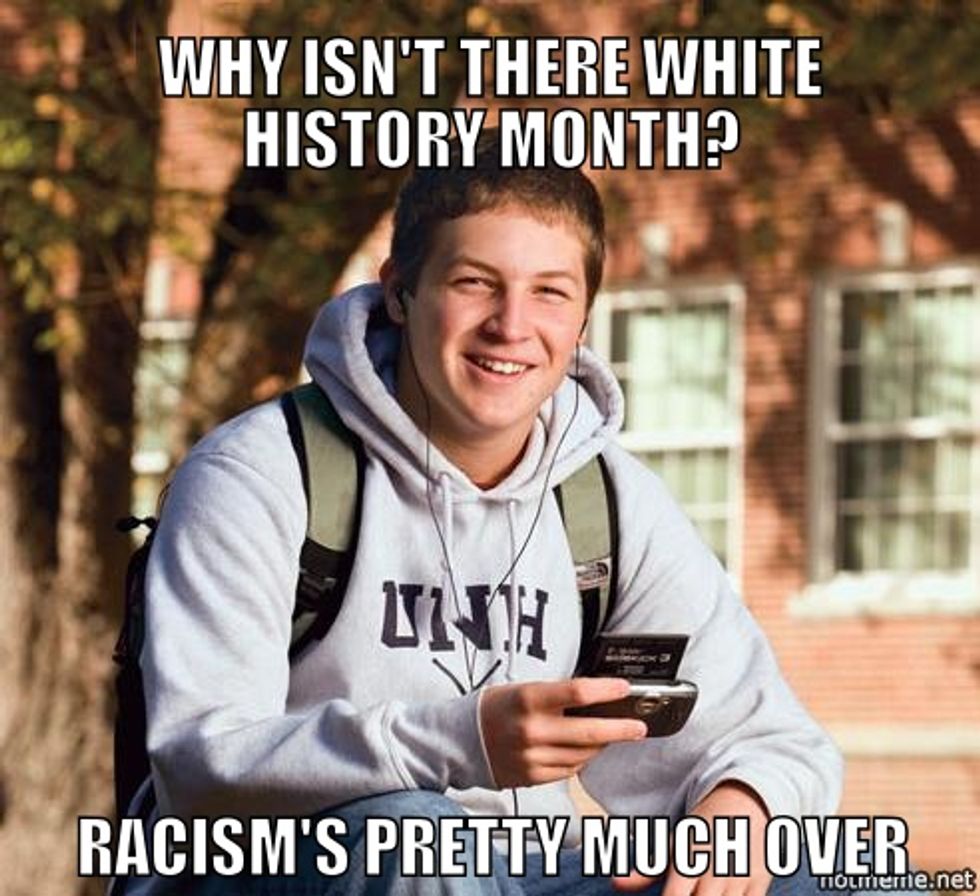 AMERICA! A nation divided! Divided between whether or not Trump should be impeached, divided on whether or not Frederick Douglass is still alive. A new poll from Public Policy Polling asked both Clinton and Trump supporters the same questions on a number of important topics in the news, and -- we must say, produced some interesting results.

The poll found that the nation is evenly divided, 46-46 on whether or not Trump should be impeached, which is perhaps the least surprising piece of data in all the world. However, just a few weeks ago, only 35% of us thought he should be impeached, so that number is actually rising.

Now, as we all know -- only Republicans love the constitution. They are strict "originalists," meaning that they want to go back to partying like it is 1776, always and forever. Curiously, however, they are not super fond of the whole "separation of powers, checks and balances" thingamajig, and 51% of them think that Trump should be able to overturn judicial decisions he doesn't agreed with, compared with only 33% who think he should not.

You may recall that time when we all laughed and laughed when KellyAnne Conway talked about the Bowling Green Massacre -- but 51%of Trump voters say this tragic event that never happened proves why Trump's immigration ban is necessary! Hoo boy!

The poll also asked people a number of festive questions about Black History Month, which were rather illuminating!

For instance only 47% of Trump supporters polled knew that Frederick Douglass is dead! And yet, 45% of them don't so much think we need a Black History Month. Embarrassingly, however, only 78% of Clinton voters knew he was dead, which is not too good either.

HEY AMERICA! YOU KNOW WHO DEFINITELY IS NOT ALIVE? IT IS FREDERICK DOUGLASS! Really! Just like Generalissimo Francisco Franco!

I know this for a fact, because I am from Rochester, NY, where he is buried in Mt. Hope Cemetery (Douglass, not Franco). I have seen his grave. Susan B. Anthony, another dead person, is also buried there. And the Bausch and Lomb guys! And also Lillian Wald, whom you have probably not ever heard of, but who was super cool and bad ass and should be way more famous. Although if you want to see the grave of silent film star Louise Brooks or Jack The Ripper suspect Francis Tumblety, you gotta go over to Holy Sepulchre.

I may have been a somewhat angsty teenager.

But hey! Even they have Confederate History Month, which is celebrated in April.

There are, a few things, however, that we do kind of agree on! For instance, only 5% of us hate Australia! Koalas for everyone! Hooray! And only 22% of voters like Steve Bannon, which is not surprising because he is the worst! (Strangely, PPP did not provide a breakdown for the percentage of Trump voters who like Bannon. Maybe it was too depressing). Plus, only 7% of voters think Donald Trump should invade Mexico. Which is maybe the most heartening thing anyone will read all week. Good for you, America!