Why polls gotta hate on Kim Davis's religious freedom to believe gays are real gross, and that she should get a hall pass from giving them marriage licenses (part of HER JOB) based on that "religious belief"? Obviously these polls were done by Satan, who should really stick with his day job, which is being the CEO of GoFundMe, we think.

And yes, we said "polls," because there are two of them! One was done by Rasmussen, which sucks at polling  some of the time, but when it sucks, it does so in a conservative direction. The other was from those real pollsters at YouGov, so let's just average these together and carry the two and, let's see ... yep, the answer is America thinks Kim Davis is THE WORST.

Let's start with YouGov, since, you know, "reputable" and stuff. Should Kim Davis have been put in jail and forced to trade french braid lessons for cigarettes, for failing to do her job? Why, 56 percent of Americans say YES! Even among Republicans, she couldn't muster majority support for living in the outside world: 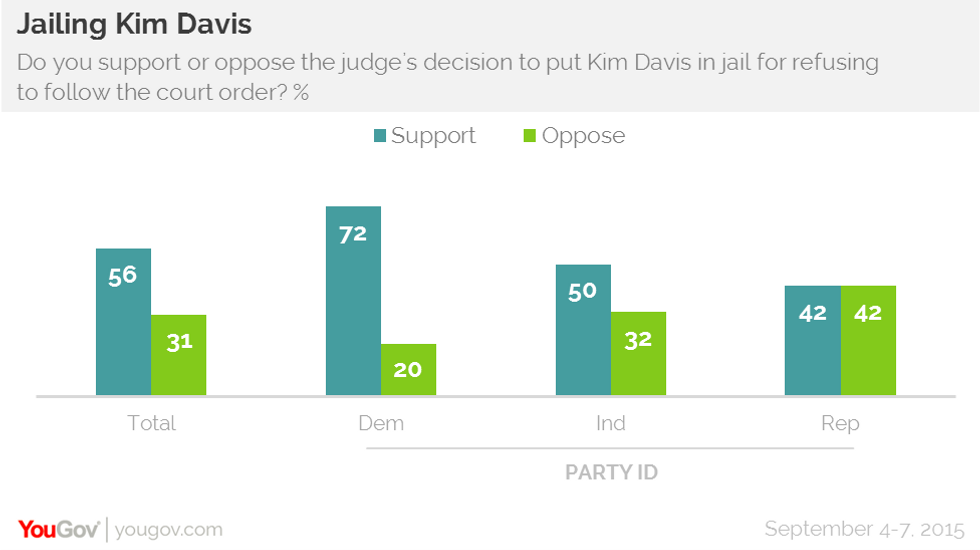 Now, unfortunately, though Americans agree that Kim Davis is A Idiot, a majority of Americans, 53 percent, have ALSO swallowed the bullshit line that "religious liberty is at risk" in America. Apparently Kim Davis is not evidence of that "problem," to Americans.

Despite this terrible attack on religious liberty, 52 percent believes people should be required to do their fucking jobs, even if it conflicts with their "religious freedom," but that number jumps to 70 percent when you only look at Democrats. Way to stay sane, blue team!

Here's a fancy fact for you: 54 percent of Americans say Kim Davis, in particular, SHOULD have to do her fucking job, even if it makes her feel icky. The only groups inclined to give her a pass? Republicans (duh) and black folks (huh)! The people who REALLY think she needs to get a life the most? The Richie Riches! Fully 70 percent of voters with household incomes over 100K say yep, lady, you got a job to do, eat a dick. But eat a dick on your own time, because while you're on the clock, you should be gaying up the gay couples, for gayness!

Want ANOTHER fancy fact? Whereas only 32 percent of U.S. Americans say Davis should get a note from Jesus to excuse her from the job duties she doesn't like, 65 percent say she should go ahead and get bent, by resigning. Like that is a whole swath of America that is like "OK fine, religious exemption, blah blah, but lady, YOU are a pain in America's bunghole, GO AWAY." And by the way, that swath of America is DIVERSE. It's like, a majority of EVERYONE thinks this (click pitcher to embiggen):

OK, let's look at sucky Rasmussen to see if it agrees. Oh my God, the Rasmussen poll is WORSE for her:

[J]ust 26% of Likely U.S. Voters think an elected official should be able to a ignore a federal court ruling that he or she disagrees with for religious reasons. The latest Rasmussen Reports national telephone survey finds that 66% think the official should carry out the law as the federal court has interpreted it.

Now, to be fair, Rasmussen did not specifically ask about Kim Davis, but instead focused on the basic question of whether public employees should do their fucking jobs. But that's still pretty bad!

In summary, and in conclusion, Kim Davis needs to be a goddamned grown-up when she goes back to work on Monday. Either do the gaying for the gays, or resign and get a better-suited job, like licking the stamps they put on the Bibles they send to China, which the Chineses did not ask for. If she doesn't pick one, Americans will never ask her to the dance ever again, unless they are planning some sort of pig blood "surprise."