Pop Quiz! The Troops Vs. Scummy Payday Loan Lenders. Who Do You Think Republicans Support? 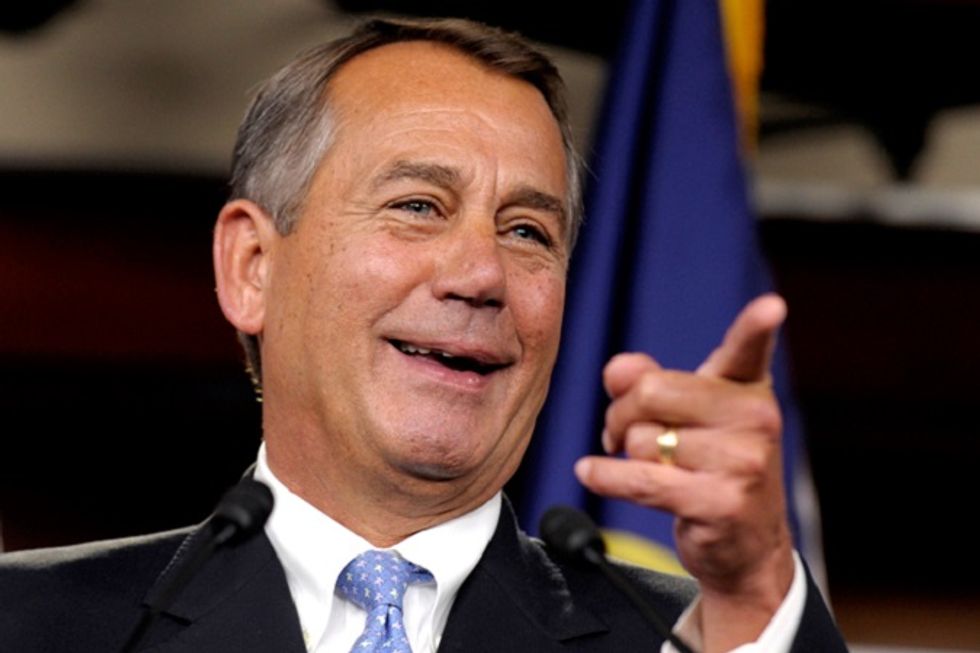 Thanks to a timely poll of fickle conservatives, we now know that most Republicans don’t support America when the shit gets heavy or the President’s a Democrat. However, you would think that a party that co-opted Freedom, Founders and Flag Pins in order to benefit their collective persona would find it in their feeble hearts to protect American troops from predatory lenders. Or maybe you wouldn't think that because you’re good at paying attention. Well 'Bully for you,' Wonkeroo.

Last September, the Department of Defense finalized new rules protecting military families from payday loans and other high-interest financial instruments. These rules are set to be included in the National Defense Authorization Act (NDAA). However, according to the Huffington Post, if GOP lawmakers get their wish, recently added Section 594 will delay implementation of these rules for at least another year. So get that quick cash with the 400% APR while you can, American Heroes. Because is there anything more patriotic than dropping $1776 dollars to pay off a $500 loan you received six months ago?

For those who aren’t familiar with the practice, many "payday loans" are essentially a form of usury. They're just relabeled with enticing nicknames and a side order of intractable debt brought on by monster interest rates. Usury has been outlawed for much of the human race's civilized existence and receives way more Biblical tsk-tsk’ing than, say, providing medical care to the uninsured or consensually sexing someone of the same gender. Yet here we are.

Like many young, desperate consumers who might lack some borrowing intuition, military families are targets of these lenders because of the often tenuous household situations that coincide with serving three tours in some bullshit war at the behest of smug politicians getting donations from the same parasitic financial institutions. Even the Pentagon notes that these practices hurt mission capability by adding unneeded stress to soldiers, as well as resulting in bad credit scores that trigger the revocation of security clearances.

But I guess you don’t go providing food and shelter for a family with the reasonable financing you want, but with the unaffordable balloon payment you’ll have.

Under the bi-partisan 2006 Military Lending Act, loan rates to military families were capped at a mere 36 percent. But ahhh those moneychangers. They're some savvy fuckers. Lenders quickly adapted, finding loopholes that enabled them to continue collecting huge interest payments (even huger than 36 percent!) while warming their vibrating foot baths with the smoldering embers of our veterans' credit. The current NDAA was supposed to change that. While the cap would remain at 36 percent, elaborate new rules would close loopholes upon the bill's passage. That is until the House GOP, and definitely not the lobbyists at the American Bankers Association, moved to push back the effective date.

The rationale for the delay was to "study" the possible effects of the new protection (STUDY SPOILER: For once, "Support The Troops" would be more than just something empty suits say in order to get votes.) Furthermore, the Consumer Financial Protection Bureau has already studied the rules (twice).

So will any of the GOP's saber-rattling jingodicks emerge from a boozy haze to stand up for our men and women in uniform? (...) I guess not. We’ll just let Hero Congresswoman (and hopefully future Senator) Tammy Duckworth (D-IL) do everything.

[Duckworth], an Iraq War veteran, will introduce an amendment to the NDAA bill that would strip out the Republican language delaying predatory lending protections.

We're sure John Boehner and the rest of his caucus are all ears about how they can help military families instead of payday loan moneychangers. Wait, we mean the opposite of that.