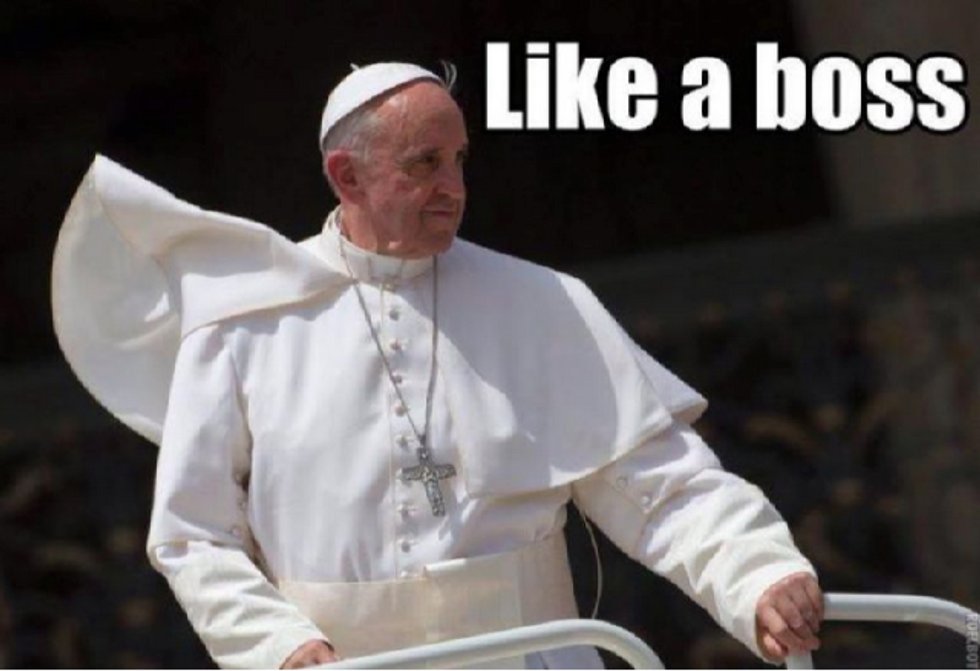 New Pope, he sometimes makes our head spin way more than Donald Trump ever could. He says the Church shouldn't freak out about gays and 'bortion, and then backtracks, and even turns around and hosts an anti-gay conference at the Vatican. And this week, it's time for more whiplash, with the news that the Pope met with Kim Davis, and then the clarification that he merely shook her hand and said "'at's nice, who are you?" at a reception, and finally today's CNN story that Francis only had a private audience with one party at the Vatican Embassy in Washington -- and that was with a gay couple. So we guess we like him again! Never mind the Liberty Counsel's little stunt; this is Francis The Untrollable.

So, what's this about a private meeting with The Gays? Let us clarify: It was not all of them. But when the Vatican clarified Friday that "The only real audience granted by the Pope at the Nunciature was with one of his former students and his family," they were talking about Yayo Grassi, who has known Francis since Grassi was a student in literature and psychology classes taught by Francis at a high school in Flores, Argentina from 1964 to 1965. And also Grassi's partner, Iwan, as well as some other friends. Yes, that's the "former student and his family," which we'd like to think is a not-so-subtle way of telling American "pro family" groups that their definition of "family" is a tad narrow.

Grassi said the Pope has long known that he is gay, but has never condemned his sexuality or his same-sex relationship. Grassi said he and Iwan (he declined to disclose his last name due to privacy concerns) also met Francis last year in Rome.

"Obviously he is the pastor of the church and he has to follow the church's teachings," Grassi added. "But as a human being he understands all kinds of situations, and he is open to all kinds of people, including those with different sexual characteristics."

Grassi also said that he believed that Francis was "misled" into the brief meeting with Davis, although it's unclear whether he had any direct knowledge of how that meeting came about.

Sources close to the Vatican have disclosed to Yr Wonkette that Francis privately told Yayo Grassi and Iwan that they had far better fashion sense than Kim Davis. Our sources also indicate that in addition to meeting his old friend and his partner, the Pontiff also held private audiences with Miley Cyrus, the surviving members of the '69 New York Mets, and filmmaker Joss Whedon, who he urged to bring back ​Firefly​, saying that Fox "really screwed the pooch" when it cancelled the cult favorite. "You could get it on Netflix if nothing else," the pope reportedly told the director. "I know people who can make this happen."