Pope Francis Meets With Scientists, Urges Certain Unnamed Nation (HE MEANS US) Not To Kill Planet 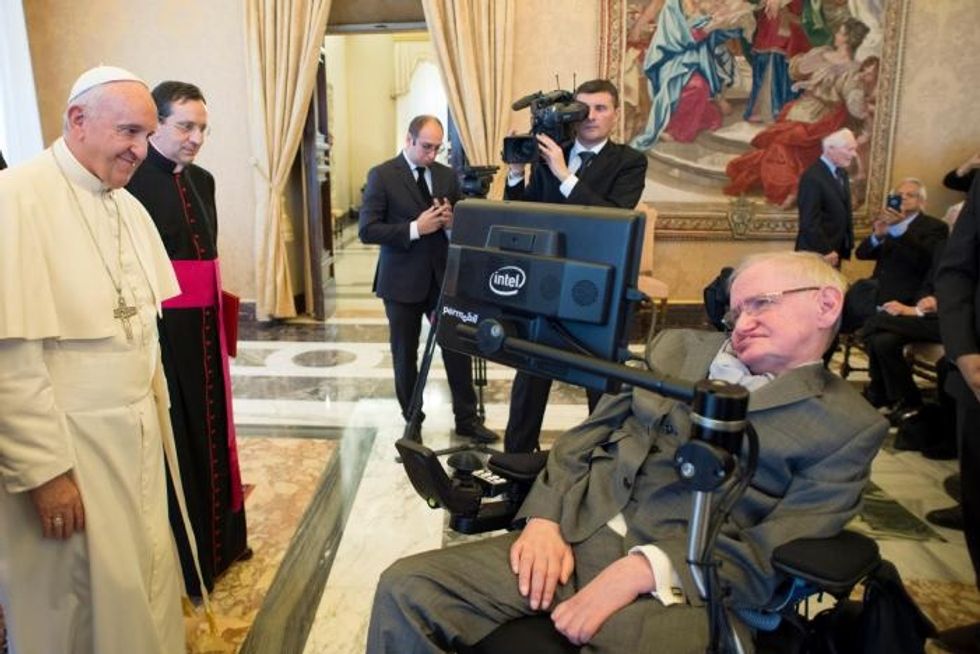 Why is the Pope meeting with that adulterer?

Pope Francis met with an international group of scientists Monday, including theoretical physicist Stephen Hawking, and used the occasion to remind world leaders that climate science is real and the Paris Climate Agreement shouldn't be abandoned. Not that Francis mentioned any particular leaders or anything, just those leaders who have been making noises about walking away from the Paris agreement and spewing as much CO2 into the atmosphere as humanly possible. The Pope didn't specify Donald Trump, of course -- just world leaders who might put short-term profits ahead of the fitness of the Earth to sustain the human creatures crawling around on it, thinking they're pretty hot with their digital watches and all:

"The 'distraction' or delay in implementing global agreements on the environment shows that politics has become submissive to a technology and economy which seek profit above all else," Francis said.

Francis, who wrote an encyclical, or papal letter, on the environment last year, took a swipe at those who dispute that climate change is caused by human activity, criticizing "the ease with which well-founded scientific opinion about the state of our planet is disregarded".

As it happens, Mr. Trump has repeatedly claimed climate change is a hoax, and that all that science is merely a plot by China to keep America from getting rich. You may remember that!

It was a nice biosphere while it lasted.

Francis's speech also called for scientists to be allowed to "work free of political, economic or ideological interests, to develop a cultural model which can face the crisis of climatic change and its social consequences," which may not sit well with the president-elect who knows less about energy than Sarah Palin and whose transition team is filled with climate deniers and oil company lobbyists.

In addition, the Pope spoke some outright blasphemy about the role of humans in ripping the planet to shreds for money, saying we mustn't consider ourselves "owners and masters of nature, authorized to plunder it without any consideration of its hidden potential and laws of development." Clearly, the Pope doesn't own enough stock in coal and oil companies. Somebody should demand Francis release his taxes.

ThinkProgress points out Pope Francis has been a strong supporter of the Paris climate treaty, which the U.S. negotiated and signed in 2015, and that the BBC reported Francis may have played a personal role in convincing Nicaragua to sign on to to the agreement -- it's rumored that Francis phoned the Nicaraguan president to persuade him to play well with the rest of the planet. It's almost as if the leader of the world's 1.2 billion Roman Catholics thinks the health of the planet and its ability to sustain human life are important somehow.

It's unclear whether the moral suasion of the Pope or the scientific authority of the world scientific community will have any effect on the walking Bad Hair Day who'll soon occupy the Oval Office. Reuters notes, with considerable whistling in the dark, that Trump made at least a token gesture toward acknowledging reality last week when he told the New York Times "he was keeping 'an open mind' and that there might be 'some connectivity' between human activity and global warming," but also pointed out that Trump's chief of staff to be, Reince Priebus, later insisted to Fox News that climate change is "a bunch of bunk."

So take that, Mr. Smarty-Pope. It is not known whether president-elect Trump has taken any time away from his busy schedule of avoiding security briefings to practicing a hilarious mocking impersonation of Dr. Hawking to amuse his crowds.