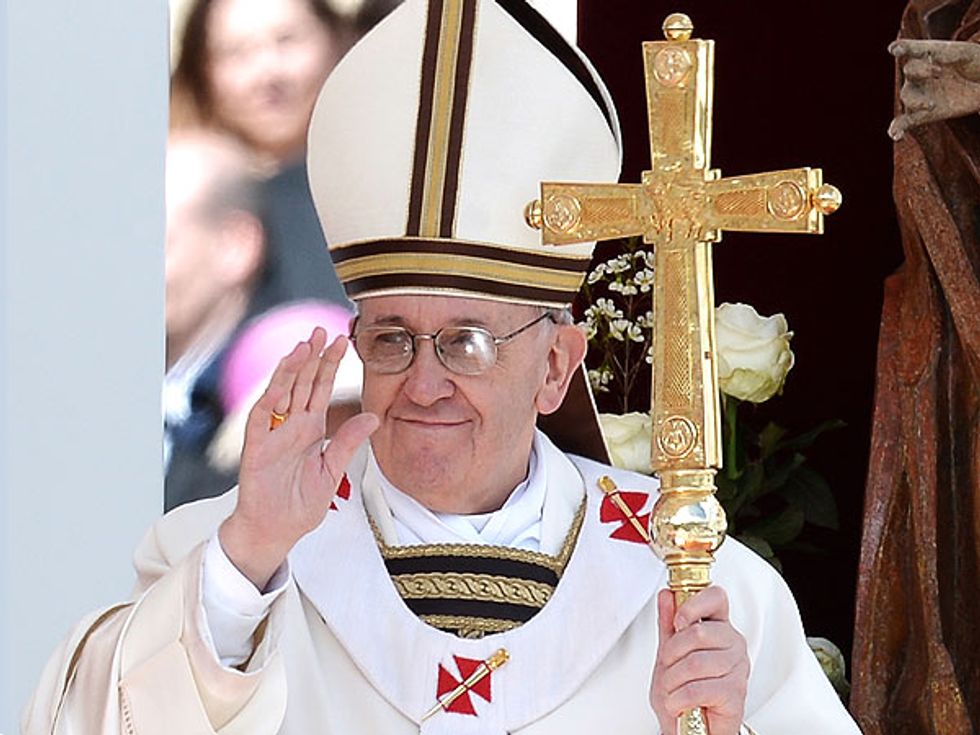 Sometimes we like New Pope Frank. Like, when he gets all Truffula tree-huggy and wants to save the Swomee Swans, or whatever, because God said, "Here is a earth-shaped planet, keep it pretty." And those times when New Pope is like, "Jesus said rich people are THE SUCK, so don't be such dicks, rich people." That's cool too and seems pretty Jesus-y.

But then sometimes New Pope is a dick his own self, and we are like, "Hey, New Pope, why you gotta be a dick like that, HUH?" Because being a dick does not seem Jesus-y. But here we are, sigh:

Pope Francis rocked the Catholic world -- again -- on Tuesday by announcing that contrite women who have had an abortion can seek forgiveness from all priests during the church's upcoming "Year of Mercy." [...]

Under the new, temporary policy, Francis is essentially suspending bishops' power to prohibit priests from offering forgiveness and giving clergy full authority to absolve abortions in the name of God and the church.

Apparently, we are supposed to believe this is some kind of generous temporary reprieve, the pope allowing women who have abortions to beg any old priest to not make her burn in everlasting hell for exercising freedom over her own goddamned womb parts. But it's not a New Church Rule, it's just for this one year only, and then, presumably, abortion-havers will have to go back to the eternal hell-burning thing no matter how many times they say "I AM SO SORRY FOR BORTIONING MY BABY, FORGIVE ME FATHER, IF YOU'RE NOT TOO BUSY RAPING KIDS, PLEASE AND THANK YOU."

We have all the confuses about how this works. Like, when God kills babies in the womb, which He does all the time, it is called "miscarriage," and that's perfectly fine, nobody expects God to apologize or beg Father Feel-You-Up to forgive his grave sin. But when ladies do it, it's a major evil bad, and they are kicked out of church forever, except for this one year only. ACT NOW, WHILE FORGIVENESS SUPPLIES LAST! we guess?

"The tragedy of abortion is experienced by some with a superficial awareness, as if not realizing the extreme harm that such an act entails," Francis said in a statement Tuesday. "Many others, on the other hand, although experiencing this moment as a defeat, believe that they have no other option."

"I think in particular of all the women who have resorted to abortion," the Pope continued. "I am well aware of the pressure that has led them to this decision."

So because of how dumb stupid ladies are, it's OK to forgive them, if they apologize, but only for a little while. Even though dumb stupid ladies are not THAT dumb, and there are, like, zero anecdotes about women going to the clinic, signing all the paperwork saying "Yes, please abortion my baby," and then saying, "Holy shit, you abortioned my baby?!?! I had no idea that's what you were going to do!"

Also? Most women do not think abortions are a tragedy. They have the abortion, and then they're like, "Whew, I sure am glad I had that abortion, and I do not feel bad about doing that, no sir." That's another true thing for ya. And thus and therefore and thereon and ipso facto, none of them need to beg for forgiveness from anyone, certainly not dude anyones, and certainly MOST DEFINITELY not from virgin perv dudes in robes who are WAY TOO INTERESTED in crawling all up inside of ladies' vag holes, because of vag envy or whatever, we guess, ewww gross.

Listen. We know conservatives these days are mighty none too pleased with New Pope for quoting Bible stuff to them and understanding how climate change works. And we love to laugh at them, for sounding like hypocritical dumbs, because of how they are "Bible this" and "Jesus that" all the time, except for when they can't find the part of the Bible that says "CUT TAXES ON THE RICH" and "OBAMA IS THE ANTI-CHRIST."

But on this one, we're going to have to not give New Pope a pass. Because he's not Bible quoting here or talking science facts. He's just making up dumb means about ladies, and that is not cool, and definitely not Jesus-y.