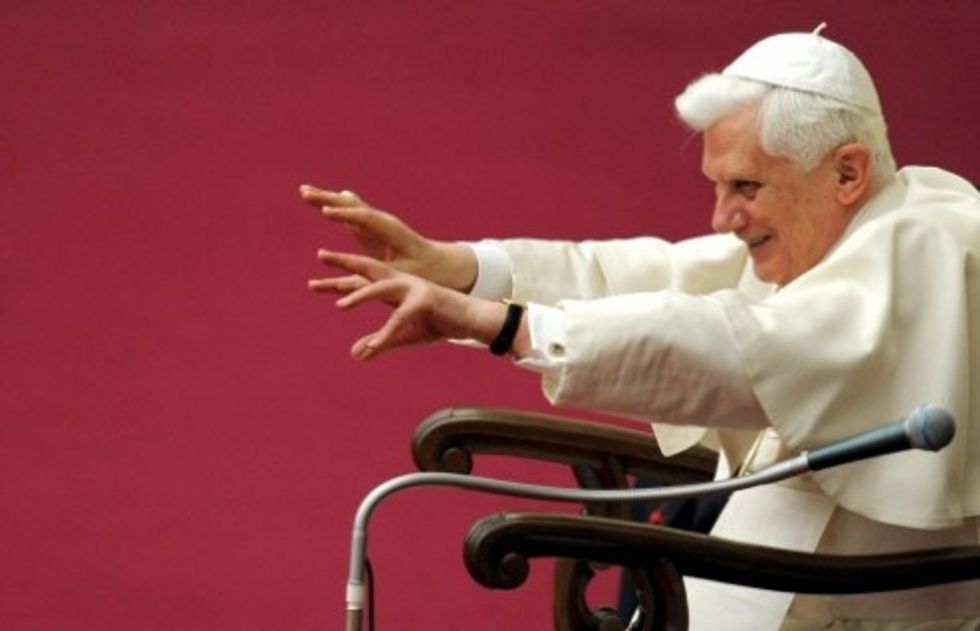 Almost exactly 600 years after thelast pope to resign resigned, Pope Benedict XVI is hanging up his Prada shoes and dancing off into ... well, we don't even know! Where do ex-popes go? Probably Boca.

News organizations are predictably going nuts trying to figure out what the HELL? (You should see your Editrix's "What the HELL?" face right now!) But at least one brave outlet is pushing back on the godless heathen marxist media, and that outlet is Ghost Andrew Breitbart's Internet Casket.

If Breitbart wants "trashing," they should probably have waited until Wonket woke up and moseyed over to the computer, as this site is both the last bastion of pure unadulterated Joe Biden Love and the number one anti-fan of the Nazi Pope, with whom we first fell into a proper hate when we discovered, immediately after he was elevated to the papacy, that he had been the official (at the Inquisition even!) who had personally defrocked Aristide. (Seven years after that last link, we are still not sober enough to properly explain Liberation Theology.)

Nor have we been too terribly pleased with about 90 percent of his pronouncements since he got his fancy hat, most of which seemed to have been yelling at nuns for not being shitty enough.

Right, so that's why we hate the pope. Why, according to Breitbart, do the rest of the media marxists? Hold on, you guys, you are about to see some deranged anti-papishness and "Catholic bashing"!

Oh, that's Breitbart's "spread[ing] conspiracy theories"? Huh. But is there more? IS THERE EVER!

...Soledad O'Brien did the same on the CNN network, immediately using the Pope's resignation as an excuse to delve into the Church's child abuse scandal.

You see, according to CNN, the Pope is retiring because dealing with the child abuse scandal exhausted him:

Much of the questioning about "the why" -- about why the Pope would be stepping down -- would be questions about the impact that the sex scandal, that has enveloped the Catholic church, would be having on the Pope.

O'Brien then spoke to her first outside "expert," left-wing filmmaker Alex Gibney, who directed the HBO film "Mea Maxima Culpa: Silence in the House of God"-- a documentary about the child abuse scandal. O'Brien set Gibney's narrative immediately with this opening question:

There also has to be some pressure and impact from what you really talked about; the sex scandal that has been a huge problem and enveloped much of the Catholic Church over the last decade.

Gibney fed the conspiracy theory by holding Pope Benedict XVI directly responsible for the scandal before going off on a wild tangent of outright Catholic-bashing:

The other part that Benedict has played here is as a man going very hard over dissenters in the church. He's tried very hard to uphold to uphold charity of doctrine. So a lot of people have been drummed out of oppositions, only for questioning things like forced celibacy, or gay marriage, or the role of women.

HOW DARE THEY? How dare they question the official story that the pope is resigning because he is old and tired? When every other pope for the past 600 years has died old and tired and that is pretty much the job?

How dare Soledad O'Brien bring up the sex abuses in the Church over the past decades, just because the pope is resigning, almost totally without precedent, one month after a Los Angeles judge demanded the diocese's sex abuse files be opened, when he himself oversaw all such cases since 2001 for the Vatican? Why even go there, SOLEDAD?

Let's end on a happy note, and imagine the pope that might be: No, Jim Newell on Twitter, not K-Lo. We are thinking a John XXIV, because we are gentle hippies, and John XXIII was fuckin' bomb.