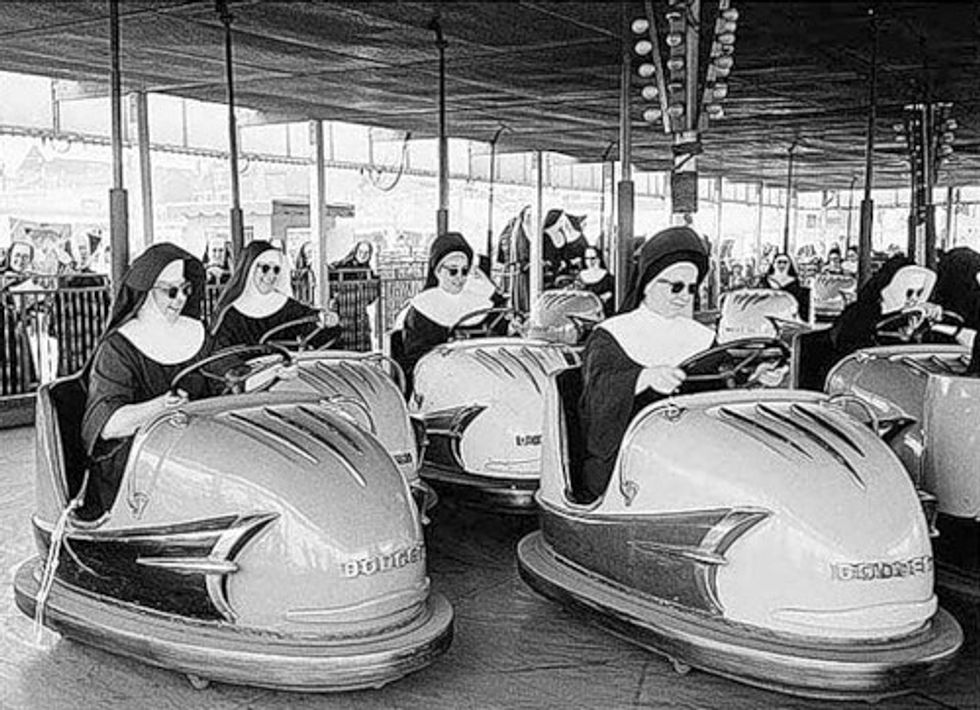 Oh, man, New Pope is doing that thing again, where he says stuff that makes us like him even if he is that head of a big corrupt institution that does evilnasty things. But we give him credit for trying to turn some of that down, what with the living in a little apartment and not eating gold and stuff, and so let's have a little cheer for some comments Saturday that would probably bring a smile to the face of his simple-living namesake. In a talk to trainee priests and nuns, New Pope said that they should avoid fancy material possessions and instead concentrate on helping the poor. That shouldn't be news -- it's no "New Pope Blesses Bikers" -- but considering that the papacy is notorious for Prada slippers and a level of décor that Donald Trump considers a tad overdone, it's news.

"It hurts me when I see a priest or a nun with the latest model car, you can't do this."

"A car is necessary to do a lot of work, but please, choose a more humble one. If you like the fancy one, just think about how many children are dying of hunger in the world."

New Pope's edging into Click & Clack territory reminded us that the first time we ever saw a Mercedes-Benz in our tiny Oregon mill town was when our parish priest bought one in the late 1960s. We were such hick kids that we argued over how to mispronounce it -- Yr Doktor Zoom was in the "mer-seeds" camp, because "mer-keeds" just sounded crazy, and even if Janis Joplin's song had been around, we weren't the kind of kids whose parents let us listen to that hippie stuff. We don't remember overhearing any parental tsk-tsking about the priest's extravagance, but there had to have been some, because we definitely remember, a few years later, some very approving comments about Sister Whassername and her very sensible Dodge Dart.

And yes, we know, the Vatican still has vast wealth and it is full of graft and corruption and it is terrible, we totally get that. But like so many ex-Catholics who still would be glad to see Mother Church get its shit together, we're staying cautiously optimistic about Francis.

Incidentally, New Pope's own vehicular choices are encouraging -- he uses a Ford Focus to get around Vatican City, and on a recent trip to a Mediterranean island, he didn't have the armored Mercedes Popemobile airlifted in. Instead, the papal advance team arranged to borrow a locally owned 20-year old Fiat Campagnola. This prompted the website "dnaIndia" to win the internet with the headline "Papal Fiat -- Francis spurns flashy cars."