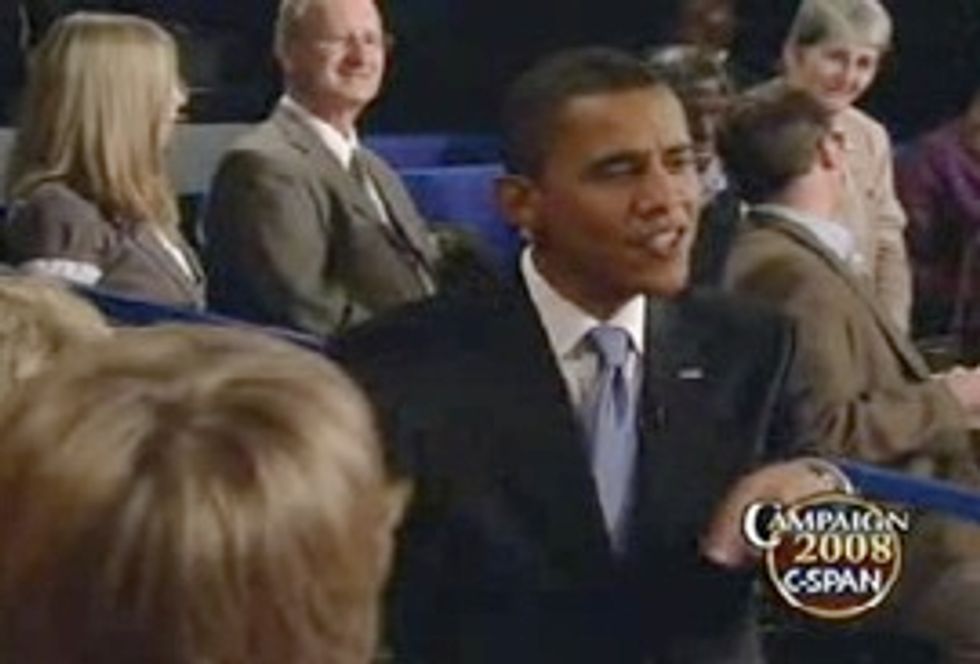 Here is that remarkable video from last night, just after the debate. The news channels quickly cut to their commentators and spin rooms and such, but the C-SPAN cameras stayed as long as there was a candidate in the room. Here's what to watch for:

00:00:13 -- Cindy McCain walks out to greet her husband, and follows him awkwardly around the room for 25 seconds, until 00:00:39, when McCain finally acknowledges her presence with a quick, one-armed hug and a split-second glance at the side of her head.

00:01:19 -- McCain may have patted Obama's back here. Impossible to tell what exactly he is doing with his left arm. But if it was a pat on the back, however patronizing, it somewhat negates the handshake snub. Somewhat. But not really.

00:01:20 -- The snub. Obama reaches out to shake McCain's hand. McCain makes a weird face and points to Cindy McCain. Nonplussed, Obama smiles and takes her hand, says some pleasantries, and returns to the voters in the audience.

00:01:34 -- McCain glances at Cindy, nods towards the exit door, and gives a spastic little bug-eyed wave goodbye to ... the exit door he's approaching?

00:01:36 through 00:11:11 -- For the next 10 minutes, Barack and Michelle talk to people, post for pictures, make jokes, have apparently serious conversations with people, sign autographs, shake hands, and otherwise engage with literally everybody in the room, a hundred people or more.

At 00:05:06, a woman slips under Barack's arm and hugs him. He hugs her back, and she actually dances back to her seat, which makes a bunch of people laugh.

At 00:10:42, a black guy in glasses and a gray sportscoat asks to have his picture taken with Obama, who motions up to the seats just out of view of the camera, and seems to say he was headed up there, but he'll come back. At 00:11:15, he comes back to the guy and happily poses for the picture.

And that's where this C-SPAN clip ends. The live video feed last night went on for another twenty minutes, because that's how long the Obamas stayed in the little theater, working the room, their "body language" betraying no exhaustion or wish to get out of there and have a beer and relax.

The debate may have been a bore, but what happened afterward was extremely telling.

Thanks to Simon Owens at C-SPAN for digging up this video for us.