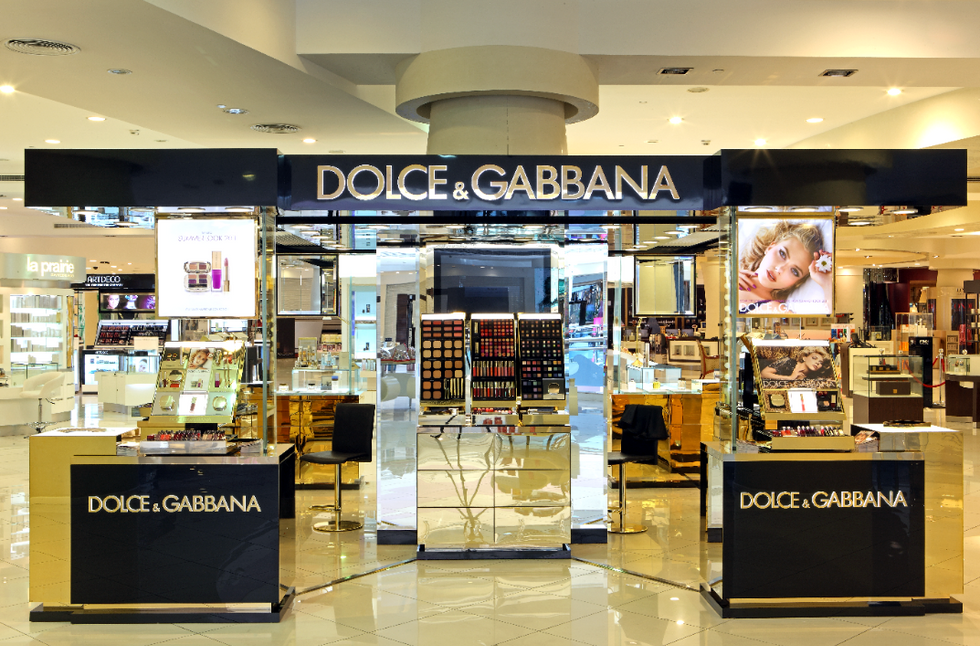 Back in the 1980s, rumors abounded that Proctor and Gamble were in league with SATAN, because their logo reminded some crazy people of some bible verse or something. But, you know, back in the those days people thought everyone was in league with Satan, daycare centers and consumer goods companies alike! While it turned out that the company was not trying to convert people to Satanism through toothpaste and laundry detergent, and the company later sued a bunch of Amway salesmen for saying that it was, that does not mean that they're still not pretty evil. Especially since they maybe fired a woman from a Dolce and Gabbana makeup counter at a New York City Saks Fifth Avenue Store for being pregnant.

Tiffany Kantrowitz, ThinkProgress reports, has filed a lawsuit against P&G claiming that she was fired for being pregnant, that the company failed to make reasonable accommodations for her prior to her termination, and that they were pretty hostile to the idea of a pregnant lady working a make-up counter in the first place.

According to Kantrowitz, she mentioned her desire to get pregnant to her manager, and was told that “Pregnancy is not part of the uniform.” Which is weird, because pretty much all "make-up counter uniforms" I've seen either involve lab coats (which seem like perfectly fine maternity wear) or regular black clothes.

After she got pregnant, she sat on a stool for a second one time because she was feeling faint, and was later written up for it. She asked for reasonable accommodations, as required by New York law, and gave HR representatives a note from her doctor, but was initially refused. When they finally did come up with a solution, it was a terrible solution.

"[T]aking breaks of five to ten minutes in one of two designated rooms, both on different floors than the one she worked on. That meant traveling to the rooms, which would eat into her break time and require some physical exertion. The breaks also took up time that she could be on the floor working toward her sales expectations, and the company allegedly made her deduct all of the break time from the 12 weeks of Family and Medical Leave Act leave she was saving for once her baby was born."

Clearly, Kantrowitz must have been the first pregnant woman to have ever worked at a Dolce and Gabbana makeup counter!

When she was four months pregnant, Kantrowitz was fired for a really stupid reason -- which she alleges was done in retaliation for having asked for reasonable accommodations.

"The company says it was for having tester items in her personal belongings against company rules, although the lawsuit contends that it was common practice for employees to try out samples and that two other employees had done the same thing without being fired or disciplined.

I worked in retail for years. FANCY retail. Boutiques, mostly, and even though they were small, we somehow never had a problem with making accommodations for pregnant employees or took time out of their hours for sitting down for a minute! Or for anyone, really. As a manager, I would have certainly preferred someone sitting down for a second to them keeling over and cracking their head on the floor. You know, because of lawsuits and cleanup and the fact that I am not a monster.

However, I've never done the department store thing or the makeup counter thing, so I asked a couple people who have. According to my roommate, who used to work at Neiman's, "bitches were pregnant all the time at Neiman's and it was never a thing." Another friend who worked at a MAC counter said there were pregnant women working there as well. Crazy!

I also found out that most of these counters give MUAs gratis products from new lines, since -- oddly enough -- trying out the products is an integral part of selling them! When they talk about "testers," they're not talking about like, the lipstick or whatever that is on the shelf for customers to try out at the counter. No one would take those because they're needed in the store. The "testers" the company is likely talking about are the teeny ones made for customers by taking a small amount of the product and giving it to them to take home and try out. I get them all the time from places! And, yes, from what I've learned, it is common practice for MUAs to take them home if it's something they haven't tried before. It's generally not considered "stealing."

Frankly, as a frequent purchaser (fine, hoarder) of makeup, I very much prefer the people selling it to me to have tried it themselves. Not to mention that if you're working commission, and you're a hustler, a lot of your clienteling is gonna be done outside of work, so carrying samples with you is actually a very smart thing to do.

All of this is to say that Proctor and Gamble is totally full of shit here and this girl was almost definitely fired because her manager had some kind of issue with having a pregnant woman on the floor. Which is both gross and illegal.