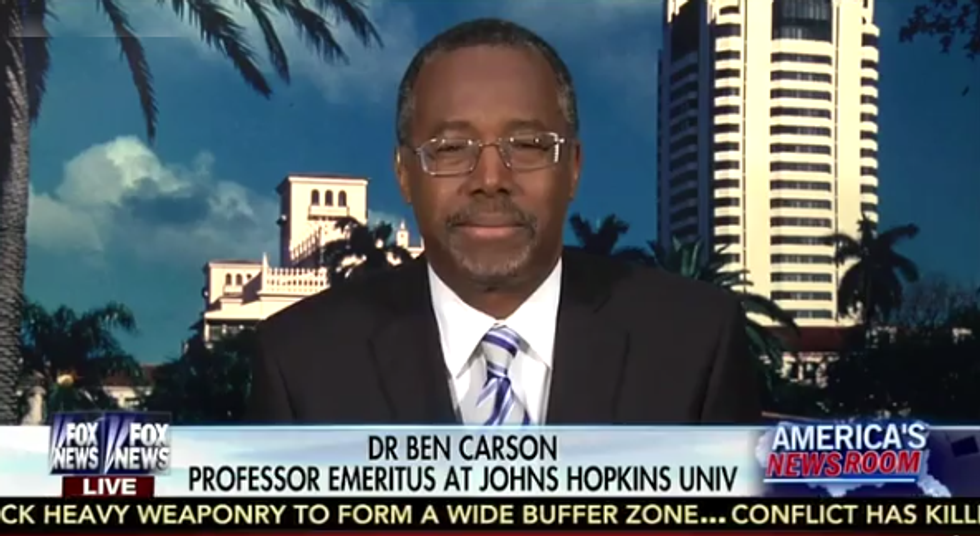 Very serious presidential contender Dr. Ben Carson -- hey, stop laughing, we haven't even gotten to the punchline yet! -- has some very serious ideas how we can win all the wars forever if we just stop having any rules about how to do war, and also have a president who is not Obama, because of how dumb he is.

Carson appeared on Fox News, the official home for wingnuts who might run for president but will never win, to explain why we have not destroyed ISIS and all our enemies yet. It is because of Obama, in case you didn't see that coming, and how he is a terrible leader who does not understand how ISIS is the worst enemy we have ever faced since the last worst enemy we had ever faced, which dumb Obama does not understand.

It’s not clear to me that he’s learned much of anything. I mean, hopefully he’s learned that we’re not dealing with a JV organization. They’re extremely sophisticated, and they have tentacles that are growing throughout the world. They’re still in their adolescent stage. And this is the time when we can crush them. But if we allow them to mature into a full-grown tree with deep roots and thick branches, it’s going to be almost impossible.

Tentacles and branches and roots and varsity teams and mixed metaphors, OH MY! And does Carson have some ideas about how he would win all the wars if he were president, hypothetically speaking, OF COURSE? Yes, yes he does, glad you asked, Mr. Fox News Guy:

I would use every resource available: military, banking, sanctions, you name it. And I would not hesitate to put boots on the ground. You know, we need to be the leaders. The coalition will form, if it has a leader. But you can’t sit around saying, “Well, you guys do this, and we’ll do that.” You know, this is serious.

Here's the other thing we need to do with our military that dumb Obama, who is trying to "micromanage" the military like he's some kind of commander-in-chief or something, doesn't get:

And our military needs to know that that they’re not gonna be prosecuted when they come back, because somebody has, said “You did something that was politically incorrect.” There is no such thing as a politically correct war. We need to grow up, we need to mature. If you’re gonna have rules for war, you should just have a rule that says no war. Other than that, we have to win. Our life depends on it.

Yes, if only we didn't have to follow stupid PC rules of war and basic human decency, we would have won all the wars forever by now, right? Right!

Hey, you know who else probably thinks war shouldn't have any rules except for winning the war? ISIS. And all our other enemies we are losing to, because of all our overly burdensome Big Government rules. Once Ben Carson is sworn in as president of the U.S., and he micromanages away all the rules that say you can't anally rape prisoners with food -- just as a random example -- we're sure ISIS will run in fear because now they know we mean actual bidness.

Ok. You can go ahead and laugh now.