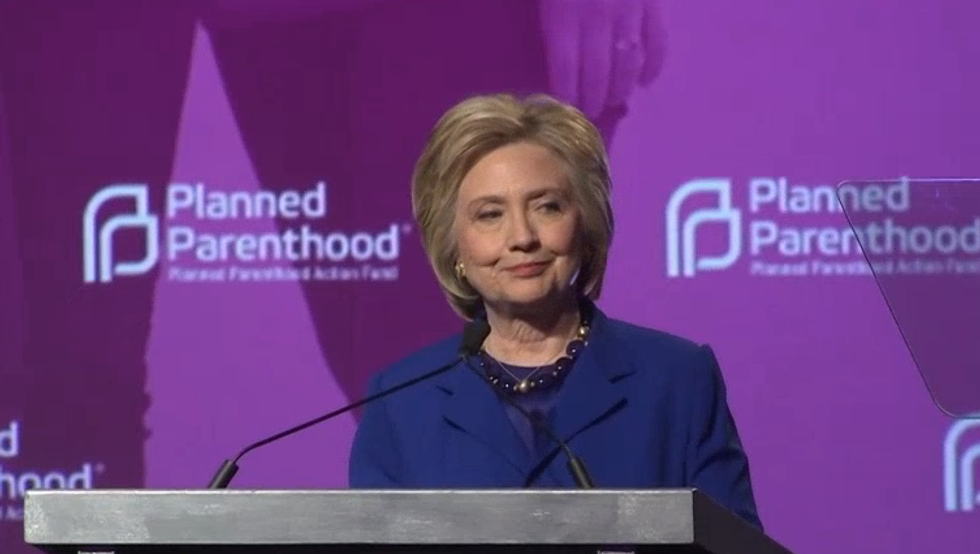 She's been a wonderful president so far!

On November 8, 2016, a large majority of Americans -- or a large majority of those Americans who could be bothered to vote -- made their decision and spoke it from the mountaintops that they wanted Hillary Clinton to be their next president. She beat her opponent Donald Trump by approximately three million votes! It was definitive. Unfortunately, another "definitive" thing is the antiquated Electoral College system, which decided that 70,000 people in three states should have their votes count for WAY MORE than three million people in California and other bastions of Liberal-Land, therefore Donald Trump is the president, and he and his on-again/off-again lover Speaker Paul Ryan have released a disastrously stupid "plan" to repeal and replace the Affordable Care Act AKA Obamacare, and people will literally die if it passes.

But what if the Electoral College/Russia/FBI Director James Comey hadn't fucked up errbody's business in the 2016 election? What would President Hillary Clinton be doing to our healthcare right now? Probably the same thing as Trump, because there were lots of smart people last year who told us, for serious, that the Democrats and the Republicans are Just The Same. Luckily, we can find out what Hillary wanted to do with healthcare (FOR THE FIRST TIME EVER!) by going to her website, which is still up and running.

For starters, in the #AlternativeFacts wonderland where Hillary is currently the president, she has just introduced a plan to "Defend and expand the Affordable Care Act," i.e. keep the nice plan that's helped so many people, but make it great again, just like Donald Trump wants to do to America! She wants to keep the parts that work and fix the parts that don't, like for example by bringing down co-pays and deductibles, and also doing something about the outrageous cost of prescription drugs. President Hillary knows that, instead of deregulating insurance companies so they are free to dick over consumers MORE, sometimes you have to stick your foot up Humana and Pfizer's ass and tell them to stop crying because their current gazillion dollar profits are SLIGHTLY lower than they were before mean Obama made them give healthcare to people with pre-existing conditions.

President Hillary wants to lower the Medicare eligibility age to 55, and encourages states to expand Medicaid more, so that more poor people might be covered. This is very different from the Trump/Ryan plan to let gross poors, including the poor white people who voted for Trump, just die a whole lot. And SPEAKING of those poor white people, Queen Hillary, who couldn't even be BOTHERED to address their needs at ANY TIME during the campaign, somehow managed to leave her ivory tower long enough to include a plank in her plan SPECIFICALLY about them:

Oh well, unfortunately we don't live in#AlternativeFacts Land, and Hillary is not the president. It sure is too bad all those white voters in the Rust Belt were having an economic anxiety attack on election day, because those very white voters stand to get screwed HARD by the plan advanced by Trump and Ryan. Maybe they should get informed next time they decide to exercise their right to vote.

President Hillary also would have protected Planned Parenthood, including the abortion part, and she wanted to make it so immigrants, EVEN ILLEGAL ONES, could buy insurance on the exchanges. Of course, we imagine many of the conservative white people who voted for Trump would rather DIE than see 'bortion and Messicans protected, so lucky for them, if Trump and Ryan's "healthcare plan" passes, they might get their chance!

FYI, as we are actual bleeding heart liberals who don't want people, even stinky Trump voters, to die for lack of healthcare, we think that fucking sucks.

Wonkette is fully reader-supported, so be a nice reader, and support us (with dollars)!