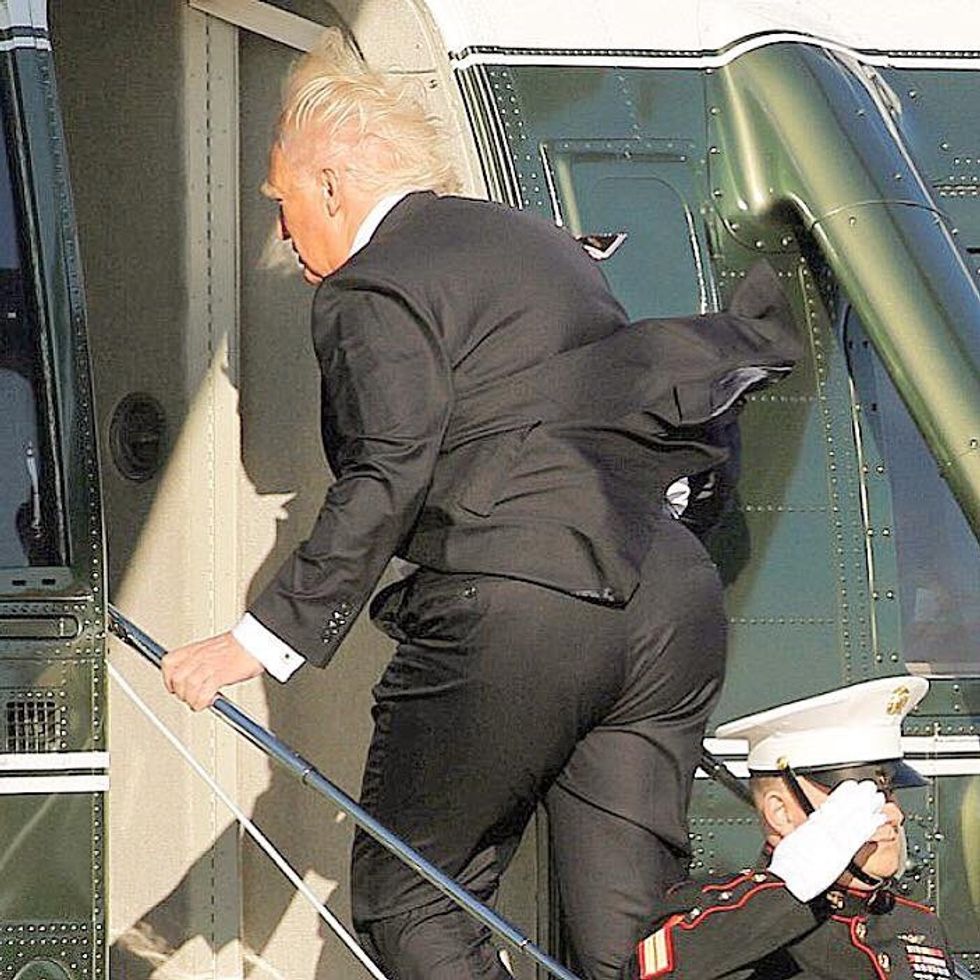 President Donald "Lazy-Ass" Trump is about to embark on a 17-day vacation to the wilds of New Jersey, putting Secret Service away from families right here in the summertime when they'd probably rather be taking their own kids on vacations or going to Hawaii with their romance sexxx lovers, rather than watching sweat drip down the cavernous creases in Trump's inner thighs while he plays golf.

Oh golly, there really is a Trump tweet for everything. Sometimes there are two:

So yeah. Trump. Heading to Bedminster for 17 days. Which is technically fine and totally normal, because this is when presidents usually head out of town. Barack Obama took August vacations. George W. Bush spent most of his presidency dragging brush to the street for the garbage men in Crawford. Whatever.

Sometimes there are three old Trump tweets for every single little thing that ever happens:

The August vacation is usually when repairs are made to the White House, and we imagine Trump has made a long list, considering how his ungrateful, undeserving ass called the White House a "dump," according to noted George Soros Illuminati Fake News rag Golf dot Com. His requests to gold-plate everything down to the bidet where he washes his pussy may go unheeded, though, because the White House is already scheduled for one of its largest renovations in years, starting today.

So yeah, it's all well and good for Trump to go away right now, if for no other reason than when Trump sees a contractor, his first instinct is to find a way not to pay them for their work.

And really, he's probably tired from all the work he's been doing. He's tweeted his fingers to the bone, he's toiled in the trenches of watching "Fox & Friends" every single morning for MONTHS, and it's really got to be exhausting to be the weakest, saddest, most failing US American president in history. Hey did you guys see the latest Newsweek cover?

They were going to go with "Fatty McBeefTrash," probably, but then the Newsweek Department Of Puns stepped in and bing bong, they used "Lazy Boy."

Sometimes there are FOUR old Trump tweets for every single occasion:

Not as bad as Donald Trump, though! Even though Trump was always saying on the campaign trail that he would stay at the White House all the time, that he wouldn't have time for golf, and that he wouldn't be "big on vacations," his behavior has unsurprisingly been the opposite, because he's lazy and he lies. The Washington Post notes that, counting little quick vacays, Barack Obama's August 2009 jaunt to Martha's Vineyard was the third of his presidency. For Trump, this is number TWELVE. What is he, fucking French?

And that's not counting all the days he wakes up and is so "TGIF MOTHERFUCKERS!" by 9:00 AM that he makes the Secret Service take him to his club in northern Virginia to spend some time chillin' out, maxin' relaxin' all cool, playin' a couple rounds of golf before he beaches his meat body by the pool ... you get the idea. Indeed, WaPo has counted up rounds of golf, and at this point, Trump has played 33, as opposed to Nobummer's 17 at that point in his young presidency.

Sometimes there are FIVE old Trump tweets for ... oh fuck it:

Is that one a riddle? PICK US, PICK US! Our guess is "What is Donald Trump by November or so?"

Wonkette is fully funded by lovely readers like you! If you love us so much, click below to fund yr Wonkette!