President Obama Asks Americans To Stop Shooting Each Other, For Real This Time 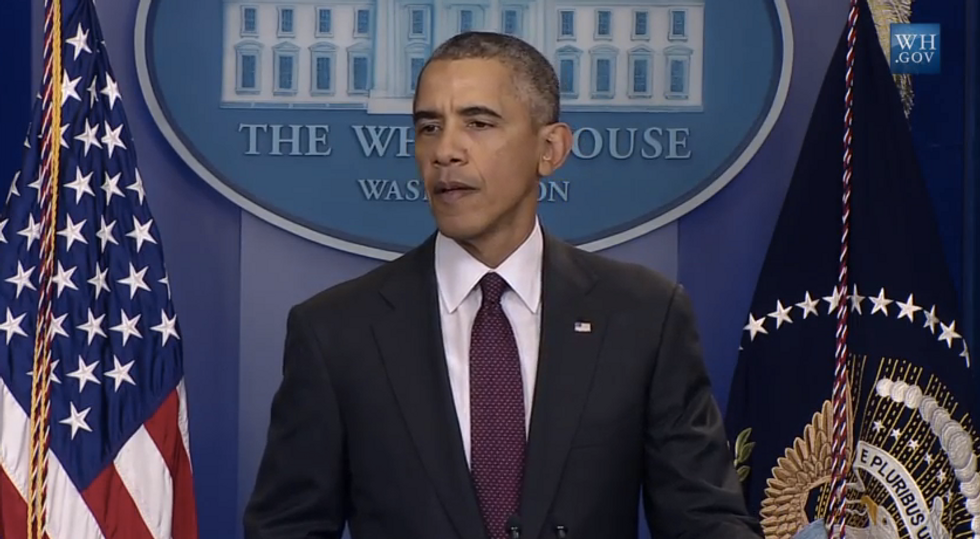 Another mass shooting in America on Thursday, this time at Umpqua Community College in Roseburg, Oregon. At least 10 are confirmed dead, another 20 are injured, and the gunman, also deceased, has been identified only as a 20-year-old male. [UPDATE: The Douglas County Sheriff's office is now reporting 10 fatalities and 7 injuries in the shooting, numbers lower than previously reported by the state attorney general.]

So it's time for President Obama to heave another heavy sigh and address the nation once more, to suggest that we might want to put our heads together to figure out how to stop mass shootings in our country, maybe by enacting gun reform that is supported by a majority of Americans, including gun owners. Didn't he just do that a couple months ago? He did!

Now is the time for mourning and for healing. But let’s be clear: at some point we as a country will have to reckon with the fact that this type of mass violence does not happen in other advanced countries. It doesn’t happen in other places with this kind of frequency. And it is in our power to do something about it.

We don't yet know why this individual did what he did. And it's fair to say that anybody who does this has a sickness in their minds. Regardless of what they think their motivations may be. But we are not the only country on earth that has people with mental illnesses who want to do harm to other people. We are the only advanced country on earth that sees these kinds of mass shootings every month.

The president is pretty pissed right now. "There are scores of responsible gun owners in this country," he says, and they understand we need to change our gun laws. "There is a gun for roughly every man, woman, and child in America. So how can you with a straight face make the argument that more guns will make us safer?"

Obama: "This is something we should politicize."

We have a Congress that explicitly blocks us from even collecting data on how we could potentially reduce gun violence. How can that be? This is a political choice that we make. To allow this to happen every few months in America. We collectively are answerable to those families who love their loved ones because of our inaction.

We have mine safety regulations and seat belts, the president says, but when it comes to keeping us safe from gun violence, we can't do anything?!? He is so sick of this bullcrap. He's not even playing. "If you think this is a problem, then you should expect your elected officials to reflect your views. And I would particularly ask America's gun owners, who are using those guns properly, safely, to hunt, for sport, for protecting their families, to think about whether your views are being represented by the organization that says it's speaking for you."

He means the NRA, in case you weren't sure and he wasn't being obvious enough. And all the politicians the NRA keeps in its pocket.

He would really like to never have to give another speech like this, for the rest of his time in office, he says. But he knows better. He knows he probably will have to. Unless we finally get our collective heads out of our collective asses and do something about it. We could do that, he says. We have the power. Please, America, don't make him give us this same speech again. The end.