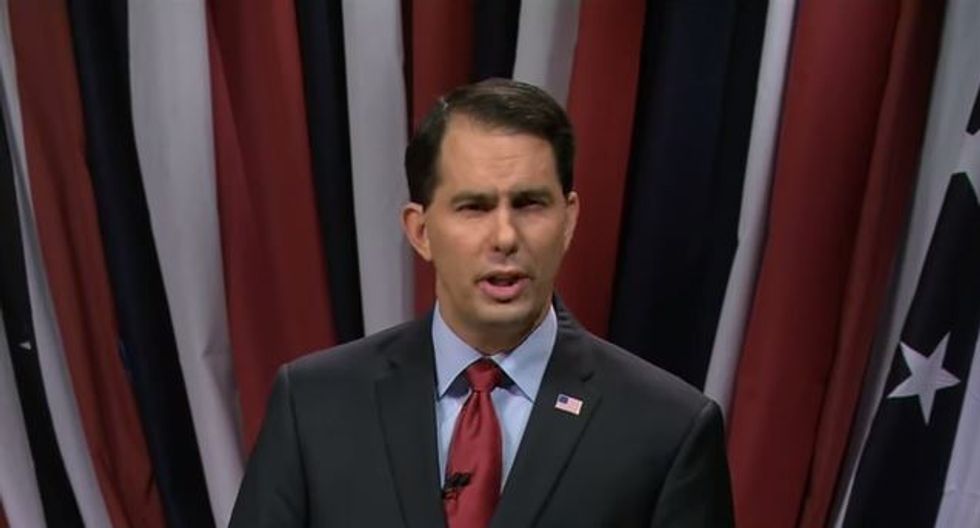 Check out the giant nutsack on Gov. Scott Walker! (But not in a gay way, that's bad for the children.) At the Jesuspalooza known as the Family Leadership Summit, in Iowa this weekend, Walker whipped it out for the media and double-dog dared his fellow Republican presidential contenders to do the same, by explaining how he will bomb the ever-lovin' fuck out of Iran the second after he is sworn in as president:

Walker said the next president will need to be prepared to take aggressive action against Iran, “very possibly” including military strikes, on the day he or she is inaugurated, and said he would not be comfortable with a commander in chief who is unwilling to act aggressively on day one of a new presidency.

That's some big-balled leadershipping right there, in't? Walker doesn't like the deal the Obama administration made with Iran, to keep its nuclear power in check while trying to keep us out of yet another fucking Middle East war from which we'll never escape. Diplomacy is for mom jeans, and Walker, he ain't no pussy like that. He'll stand up to anyone, any time -- except reporters who ask him about evolution.

Walker earlier said he would simply undo the deal with Iran on that first day of his presidency, with his magical executive pen that only white presidents are permitted to use (for reals, it's in the Constitution, you can Bing that shit). But then Jeb Bush and the rest of the universe presidentsplained to Walker, and Bush "said ending the deal on the first day of a new administration was unrealistic and suggested that promises to do so, while politically appealing, reflected a lack of seriousness." So then Walker's team called Jeb! a lily-livered pussy and decided screw the paperwork, Walker will just go straight for the big red button, like A MAN.

Or, at the very least, Walker will slash the ayatollahs' pensions, to show them how tough guy he is, and if that doesn't work, he can bust their union, which is how Ronald Reagan defeated the Germans when they bombed Pearl Harbor on 9/11.