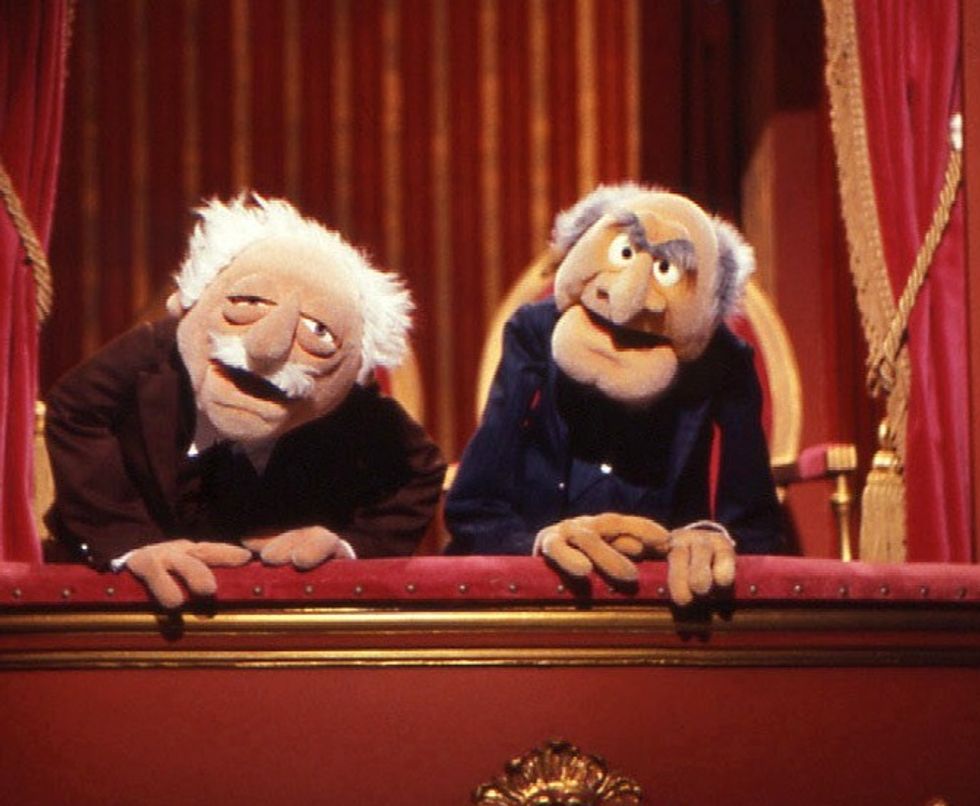 Oh my god. Republican protests are NEXT LEVEL. I can't stop laughing. pic.twitter.com/AJQMQbFsmw

Some anti-Planned Parenthood demonstrators were captured performing this little playlet in front of the White House recently, and it is the most amazing dramatic performance we've seen in quite some time, and that's including Kid Zoom's explanation of what happened to that slice of cake I was saving. It's a masterpiece of economy, with all the subtlety of a political cartoon where everything has a clear label but the thing as a whole makes no goddamn sense. Puts us in mind of that time when Jesus Camp put on a production of Sweeney Todd. This classic sample of Theater of the Obamasurd has already gotten rave reviews after being posted to Twitter Tuesday by a guy named "Calvin," who gives it an enthusiastic blurb: "Oh my god. Republican protests are NEXT LEVEL. I can't stop laughing."

For those of you too squeamish to watch even a 30-second video (what is wrong with you wimps?), here's what happens (spoiler warnings!):

A handcuffed woman wearing a sign saying "TAXPAYER" shouts "I don't believe in abortion!" and is whipped by a guy in a Barack Obama mask, who exclaims, "I don't care! RENDER UNTO CAESAR WHAT IS CAESAR'S! Give me money to kill babies!" The poor taxpayer submits, saying, "All right, all right, I'll pay you! Just don't hit me any more," and hands Obama some play money (OR IS IT HER IMMORTAL SOUL?????)

The focus then shifts to a woman holding a nekkid baby doll in one hand and wearing a sign that says "kill my baby I need a boob-job" (caps and punctuation verbatim). She shouts the customary slogan required of all who go to Planned Parenthood: "Please, kill my baby! Kill my baby!" Obama commands a guy dressed as a doctor: "You! Kill that woman's baby!" The doctor gives him a snappy Hitler salute and takes the money from Obama, stabs the doll with the knife while Obama mutters "Yes! YES!" and then tosses the now-lifeless plastic doll over his shoulder. The doctor and Obama shake hands, turn to the camera, and freeze in a shared leer of orgiastic pleasure. END SCENE.

Oh, sure, we could nitpick some of the details in this work of cinema pre-viabilité, like pointing out that not even the idiots who made the heavily edited anti-Planned Parenthood videos claimed the organization is paying women to have abortions so they can get boob jobs. (Not yet, anyway, but maybe that will be in the next released video.) That, however, is so completely beside the point that it's like complaining the X-Wing fighters in Star Wars have no business flying around the vacuum of space as if they were WW II dive bombers. What matters is that this is brilliant political theater, written and performed with passion, and so thoroughly over the top that we won't be surprised if the troupe gets a three-picture deal with Rick Santorum's House O' Christian Movies, which appears to still be a going concern.

We're looking forward to the troupe's next production, an ambitious 45-second opera with the working title "Women on the Pill Are Such Incredible Whores Who Will All Go To Hell."