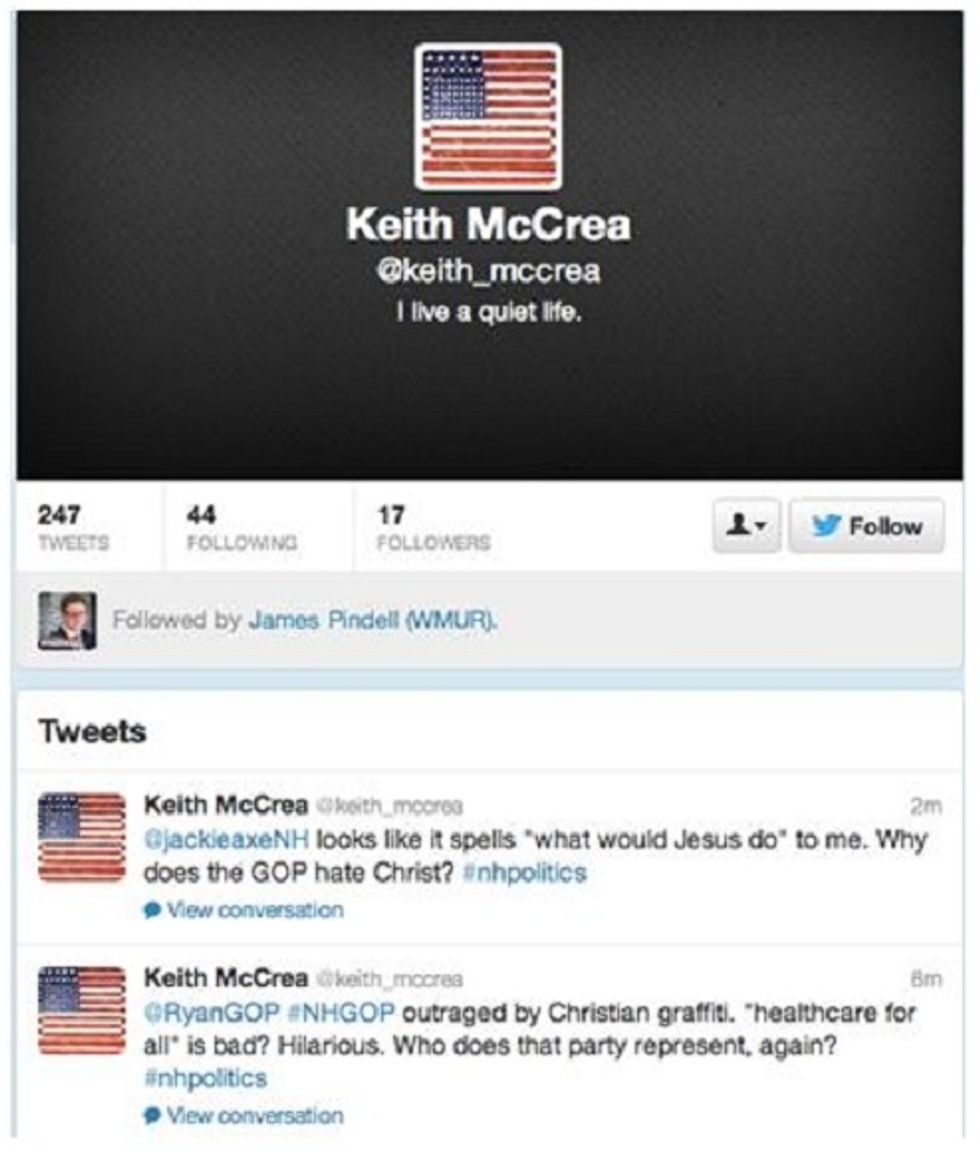 Someone spray painted "WWJD Healthcare For Everyone" on the side of the New Hampshire Republican Party office in Concord over the weekend. NHGOP Executive Director Matt Slater was aghast. In a statement released Monday, he said:

"Our building was clearly vandalized by liberal political activists who disagree with our fiscally responsible values. Instead of trying to engage in a serious debate about the issues facing our country, these cowardly extremists decided to spread their liberal agenda by damaging our property[.]"

Yr Wonkette of course does not endorse property damage. On the other hand, you have to enjoy a Republican saying that "What would Jesus do?" is an extremist statement in opposition to his party's "fiscally responsible values."

"This type of outrageous and illegal political activism should be condemned by the New Hampshire Democrat Party. They need to send a clear message to liberal activists that their shameful tactics have no place in politics."

Yes, "Democrat Party" -- there's no need to let a call for civil discourse interfere with a chance to needle the opposition, after all.

State GOP officials also demanded that a consultant who works for a Democratic state Senator be rebuked for his "outrageous" tweets (since deleted) in response to the graffito:

The official statement upped the ante, using "Democrat" as an adjective another four times. It must be official policy. The statement insisted that

Senator Martha Fuller Clark and the New Hampshire Democrat Party need to immediately condemn these despicable comments and make it clear that they do not condone vandalism in politics[.]"

The consultant, Keith McCrea, later removed the despicable messages and tweeted an apology.

Residents of large urban areas may be amused to know that police are investigating the incident. Yr Wonkette hopes that the miscreants responsible are brought to justice and if necessary sent to Gitmo.

Update/Correction: Keith McCrea emailed us with this clarification:

Longtime fan, first time mentionee. I am not a staff for the senate, I'm a consultant who works for a senator. If you'd change that, I'd appreciate it.

We have updated the story to correct Mr. McCrea's job title, and thank him for being a longtime reader!