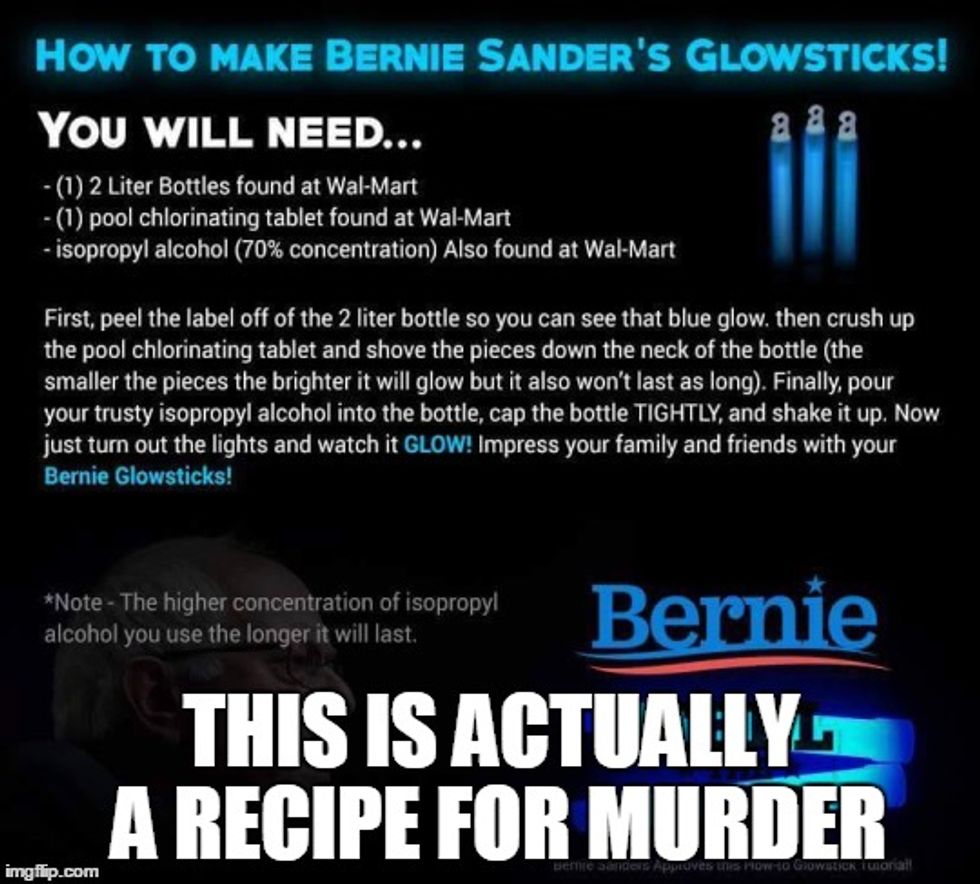 Hey, Bernie Fans! Look at that meme up there! Isn't that a fun idea, if you are a Bernie fan under 25 who is into raves or gay sex (or both!), to have glow sticks for Bernie? OK, well, if you want Bernie glow sticks, you'll need to figure out how to make them yourself because DO NOT FUCKING DO ANYTHING THAT MEME SAYS. You see, somebody out there is trying to kill you dead:

Here's what would actually happen if you made them. The instructions require you to mix a swimming-pool-chlorinating tablet with isopropyl alcohol, then shake the ingredients together inside of a closed bottle. The chemical reaction rapidly generates enough chlorine gas to cause a pressurized explosion in the bottle, releasing the gas into the air.

If the lungs are exposed to enough chlorine gas, it begins to attack the respiratory system and can cause the lungs to fill with fluid until the victim asphyxiates.

In case it is against your religion to read block quotes, the short version is IT IS A BOMB. And not in a good way, like if something is "bomb-diggity" or "bomb-ass." It is "bomb" in the bad way, like go boom. We do not want Bernie supporters or Hillary supporters or even Trump supporters to go boom, OK?

So this is some sick genius, but mostly fucking sick. God only knows who would originate something like that ... some murderous asshole on the internet who happens to hate Bernie, or just somebody who wants to kill people and saw an opportunity. Either that or the Clinton-Murder-Industrial-Complex has gone really high tech! (Just kidding, the Clintons haven't actually murdered anybody, and anyone who says otherwise is vomiting out bullshit fake right-wing rumors from the '90s. Don't be an idiot who says things like that.)

And look, if you are a grown-up, you should know by now that half the memes on the internet are bullshit. They say Obama or Hillary or Donald Trump said something they didn't say, or they have wrong #ScienceFacts, yadda yadda. They're so notoriously unreliable that actually funny pranksters have made TONS of memes that sort of sound real, just to see if they can get all the dumbo-craps on the internet to share them. AND THEY DO SHARE THEM.

In that way, this is an object lesson of sorts, in how memes are bad and you should feel bad for sharing them, unless you are sure they are good memes like this Wonkette meme of U.S. Attorney General Loretta Lynch saying something nice to transgender people, in which case share away!

But this is super sick, because though many smart people already know memes are often horseshit, people don't tend to be conditioned to think RECIPES ON THE INTERNET are horseshit, even if they are recipes for glow sticks.

[wonkbar]<a href="http://wonkette.com/567966/grown-up-baked-mac-and-cheese-recipe-for-grown-ups"></a>[/wonkbar]Likewise, nobody goes to the Wonkette Recipe Hub and wants to make our Grown-Up Mac 'N' Cheese For Grown-Ups (WHICH IS SO GOOD, OMG) and thinks, "Oh, I'm so tempted, but what if Wonkette is going to make me 'splode?" Trust us, the only kinds of 'sploding that will happen if you make that are A) Your heart and your body and mind will 'splode from HAPPINESS, because it is so good, or B) Yo' ASS will 'splode, because it's got some 'gredient in it you know you're not supposed to eat, but you made it anyway because it is THAT GOOD.

The point is that whoever made this meme is a sick, sadistic motherfucker and we hope they get caught. The other point is STAY SAFE, BERNIE SUPPORTERS. The OTHER other point is Wonkette's mac 'n' cheese is the bomb, and we mean that in THE GOOD WAY.