Pssst, Senate Voting On Banning Your Abortions Tonight, Because Nothing Else Is Pressing, We Guess 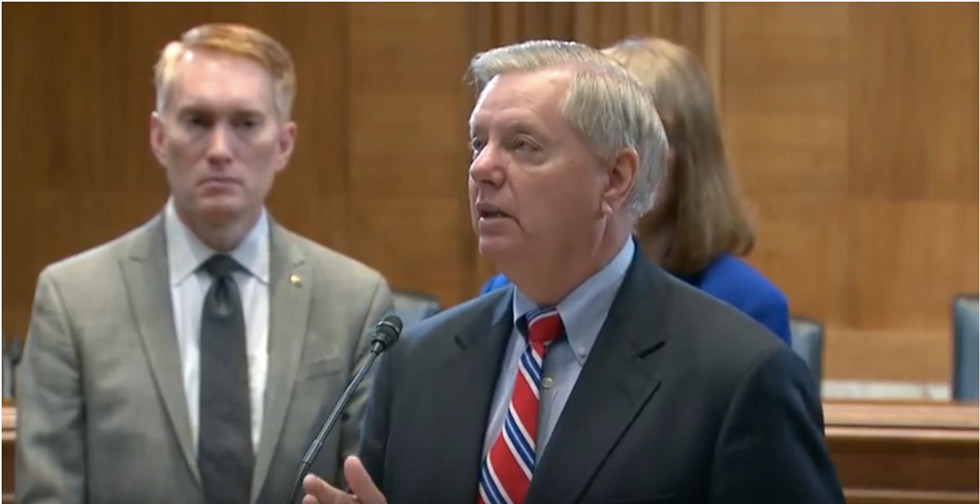 Tonight, the Senate is expected to vote on a bill that would ban abortions after 20 weeks. This would be very, very bad for anyone who can get pregnant, on account of the fact the vast majority of abortions after this time are due to fetuses with severe, unsurvivable defects.

It's extremely unlikely the vote will pass -- even though Trump announced at the March For Life that he was eager to sign it. It would require 60 votes, and the GOP only has 50. (John McCain is still feeling poorly.) There is almost no way they would get 10 Democratic Senators to sign on -- and it's unlikely that Lisa Murkowski and Susan Collins will be too into it either.

The bill, introduced by Lindsay Graham, is titled the “Pain-Capable Unborn Child Protection Act” -- based on the fact that they have decided that a fetus can feel pain at 20 weeks. Of course, according to the American College of Obstetricians and Gynecologists, a fetus actually cannot feel pain until around 24 weeks.

A human fetus does not have the capacity to experience pain until after viability. Rigorous scientific studies have found that the connections necessary to transmit signals from peripheral sensory nerves to the brain, as well as the brain structures necessary to process those signals, do not develop until at least 24 weeks of gestation. Because it lacks these connections and structures, the fetus does not even have the physiological capacity to perceive pain until at least 24 weeks of gestation.

In fact, the perception of pain requires more than just the mechanical transmission and reception of signals. Pain is “an emotional and psychological experience that requires conscious recognition of a noxious stimulus.” This capacity does not develop until the third trimester at the earliest, well past the period between 20 weeks and viability. The evidence shows that the neural circuitry necessary to distinguish touch from painful touch does not, in fact, develop until late in the third trimester. The occurrence of intrauterine fetal movement is not an indication that a fetus can feel pain.

If you can't make your case without making shit up, you have no case. If "abortion at 20 weeks gestation" were a famous person, they could sue the Senate for libel and win, because this would count as actual malice.

You can believe that fetuses can feel pain at 20 weeks all you want. You can also believe that they can do the hokey pokey, file your taxes, and sell Avon door-to-door. Believing does not make it so, and repeating it doesn't either. But doing so sure can make it feel true -- and if voters care more about the imaginary pain of a fetus that can't feel more than they do about the actual pain of parents having to watch an unviable child die as soon as it's born, they can reel in a good amount of votes.

While they know they can't get this passed, they're hoping to cement something into the minds of voters: "Republicans wanted to ban abortions on fetuses that could feel pain, and Democrats wouldn't let them." They count on voters not actually being informed enough to know that they are lying, and they don't care about those who are, because those voters are probably not going to vote Republican anyway. They want to energize the evangelical base and get them out to the polls in droves, ready to protect all the imaginary pain-capable fetuses.

If Republicans are so concerned about late-term abortions, one would think they might want to consider eliminating laws that make it more difficult to get one early on. Many states with few abortion clinics have waiting periods -- so if you want an abortion, you have to drive a few hours to the clinic, get a consultation (which often requires you to hear other lies about abortion), then wait three days in order to go back and actually get the abortion. So, if you stay in town rather than drive back and forth, that's five days out of work! How many bosses are gonna be cool with someone taking five days out of work with little to no notice? Not many!