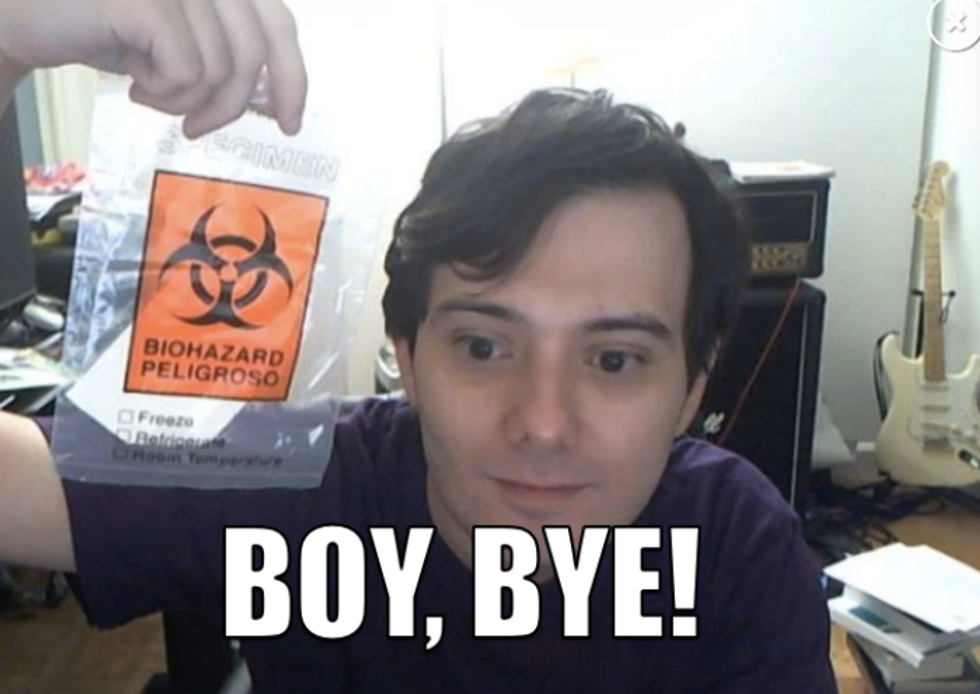 One day you're offering your 70,000 Facebook followers $5,000 for a strand of Hillary Clinton's Hair, and the next day you're waking up in a maximum security jail. It's PC Culture run amok, that's what it is!

Just kidding! That dickweasel Martin Shkreli deserves everything he gets AND MORE! Not just for hiking the price on lifesaving AIDS drugs, but for being the escaped id of rapey online harassers everywhere. Also, too, there is the Ponzi scheming. After his "But I Put The Money Back Eventually" defense failed to impress a jury last month, Shkreli was convicted of securities fraud. The judge released him into the wild on $5 million bail to await sentencing next year.

Although he's banned for life from Twitter for harassing Lauren Duca, Shkreli spends much of his free time argle bargling on Facebook Live for his many followers. Of late he has been barfing out some shit about Hillary Clinton plotting against him? We are not entirely clear, since he deleted much of the original post and we'll just Hulk Smash the 'puter if we have to do an extensive image search of that pustulent weenus's ugly mug.

Shkreli wanted one of Clinton's hairs with a follicle attached so he could compare it to a DNA sample he claimed to have? Who the hell knows what that maniac is talking about.

Prosecutors moved to have Shkreli's bail revoked, and his long-suffering (but well-compensated!) attorney Benjamin Brafman was forced to argue with a straight face that the 34-year-old Shkreli was just a confused young man with an odd sense of humor. Via WaPo,

“He did not intended to cause harm,” he said. “Being inappropriate does not make you a danger to the community.”

“He says things that are stupid. I don’t think stupid makes you violent,” Brafman said. [...]

“He did not hold up the severed head of the president of the United States like Kathy Griffin,” Brafman said.

Then he promised that this time would be different. If Judge Matsumoto would just prettyplease let Shkreli stay out on bail, he'd stop buying up the domain names of female reporters who cover him and auctioning them off. Okay, yes, Judge Matsumoto had to issue a gag order during the trial because Brafman couldn't stop his client from saying crazy shit to the media. But for reals, this time! Via NYPost,

“Judge, we’ll do anything you ask.”

To which prosecutor Jacquelyn Kasulis responded that Shkreli was no longer the Boy Wonder Pharma Bro, he's a criminal defendant who went online and solicited an assault on a 69-year-old woman.

“He can’t control Mr. Shkreli, that is very clear,” Kasulis insisted, gesturing to Brafman. “[Shkreli’s] demonstrated an escalating pattern of threats against women.

“He’s not special, by any stretch of the imagination,” she added. “He’s a convicted felon.”

We are reminded of that time during Shkreli's trial when Brafman said "I would very much appreciate it if he did not talk to the press because sometimes he doesn’t have a filter." To which Shkreli responded, “He can do what he wants.” Oh, right! We read it in a Wonkablog entry titled "Martin Shkreli Will Not Shut The Fuck Up!"