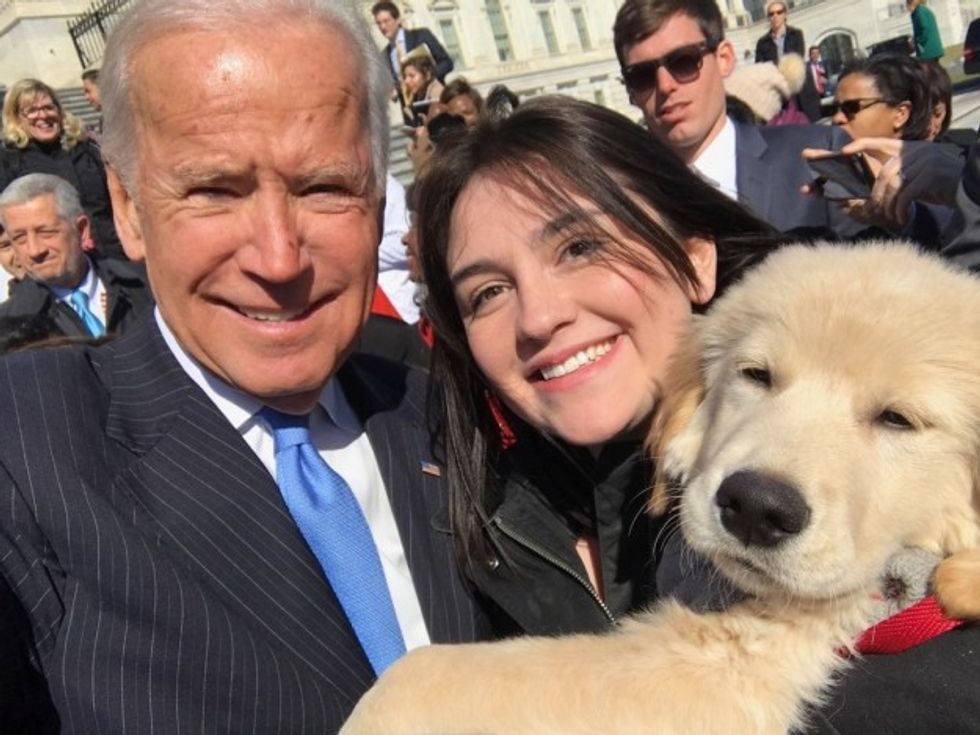 BIDEN THE HUMAN! BIDEN THE PUPPY! (pic from the pup's owner, viaBuzzfeed)

There is so much bad news right now, from what happened in London today to syphilitic gopher pube Rep. Devin Nunes trying to foreclose the investigation into Donald Trump's ties with Russia before it even starts. But there is a HAPPY NEWS to share, and it involves Joe Biden and a puppy named "Biden"! As Buzzfeed's Lissandra Villa explains, the former veep went to the Capitol on Wednesday for an event commemorating the anniversary of Obamacare AKA the Affordable Care Act. And also too, a GOLDEN RETRIEVER PUPPY named "Biden" went to the Capitol today, to commemorate how JOE BIDEN IS AWESOME.

“I named the dog Biden just because he is probably my favorite politician and favorite elected official,” Sydney, Biden’s owner, told BuzzFeed News. [...] “I really respect Joe Biden even though I don’t necessarily align with him politically.”

So they went to the Capitol REAL early, and reportedly Biden the Puppy was SO GOOD THE WHOLE TIME. And then, when Biden The Human was doing his speech, he saw Biden The Dog, and there was TRUE PUPPY LOVE:

“As soon as he saw the dog during the actual speech, he pointed at the dog, tapped his friend and then started like cracking up. Right towards the end, I, like, kind of signaled him, and he, like, gave me a wink to come over,” Sydney said.

“As soon as I told him his name was Biden, he started kissing the dog, which is like exactly what I expected Biden would do,” Sydney said.

And the rest is history!

Now, we have been told we need to inform the Wonketariat, and also 'SPLAIN TO BIDEN THE PUPPY, that this is by far not the first dog to bear the name of "Biden." Editrix Rebecca has a Commie Mom, and she has a dog named "Joe Biden"! The original Joe Biden The Dog is not a Golden Retriever puppy, but rather a Yellow Lab. Let's look at a picture:

Joe Biden on the left. Jerry Brown on the right.

So many politico dogs!

Joe Biden The Human loves dogs, though. Remember that time in 2015 when he got a boo-boo on his face, because he got totally mauled in a puppy dog play fight? Awwwwwww! That was great.

Anyway, back to today's event at the Capitol, GQ says that after the Biden Obamacare rally, a reporter asked him if Nobummer The Kenyan really did an illegal "wire tapp" to Donald Trump, and here is what he said:

Yeah, five or six times. Are you serious?

Man, we miss him.

(This is your open thread, by the way, so talk and post pictures of puppies and sexxxy Joe Biden, or whatever else you want to do, we don't care.)

Wonkette is all reader-funded! If you like puppies and Joe Biden, click the banner below to give us a few dollars!