Quack Anti-Vaxxers: Protect Your Kids With Sugar Instead 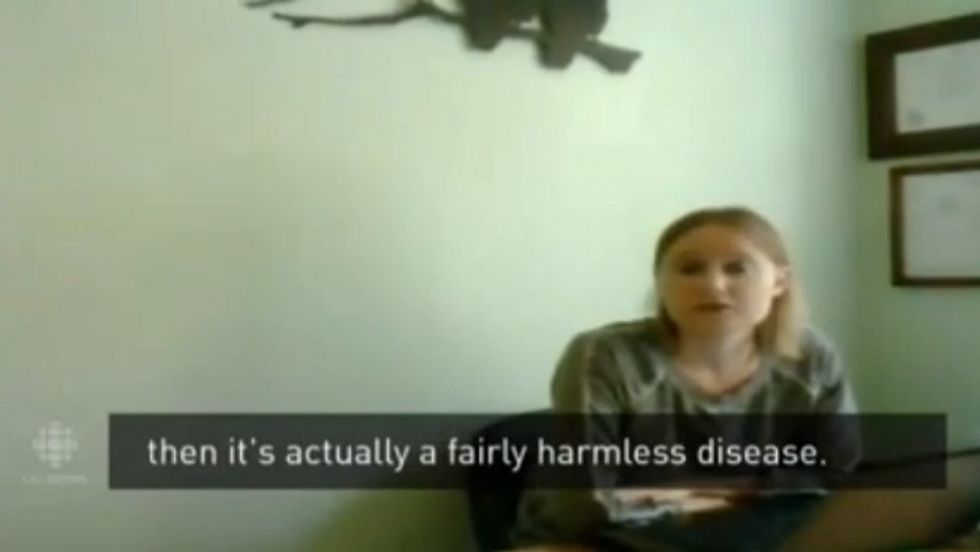 Just in case you needed a reason to slap your forehead and despair for humanity this morning, how about a recent report from CBC's Marketplace program on anti-vaccine myths being fed to new parents in the Great White North, eh? Using hidden cameras, reporters visited several Canadian homeopaths who explained that vaccines might give your precious babby autism (do we actually need a link debunking that? Of course we do), while measles and other highly contagious diseases are No Big Deal. The CBC report cites estimates that as many as 40 percent of Canadian 7-year-olds are not up to date on their vaccines.

Oh, but the practitioners in the video are such special snowflakes who just "want parents to know the risks" and to make

"informed choices" -- although anyone taking a child to a homeopath is already making some pretty uninformed choices to start with. One homeopath explained, "The autistic kids I see, their parents are fairly confident that their children were vaccine-damaged,” so you know that parents are just getting awesome information. They feel confident, and that is science.

Just look at the other medical facts these healers dispense. One explains that vaccines are risky because "Babies are getting too much stimulation of their immature immune systems," a fact borne out not by any "medical research" -- which is all just a marketing tool of Big Pharma anyway -- but by the obvious scientific fact that babies are in fact quite small.

Another explained that measles "is not... is a, really not a dangerous disease," and yet another said that as long as a child is over the age of one, "then it's actually a fairly harmless disease," which is accurate, we suppose, as long as your definition of "fairly harmless" includes "can lead to complications and death." Then again, you could be hit by a bus tomorrow, right?

Our favorite proclamation from a homeopath in the report: “Many diseases that children are vaccinated against, their risk of getting is very low" -- or at least it was, because of vaccinations, although now that a significant minority of parents are avoiding vaccines, that appears to be changing.

This is not to say that the homeopaths visited by the CBC -- none of whom were willing to do an on-camera interview -- recommend doing nothing. Instead, they recommend doing almost nothing:

All of the homeopaths featured in the “Marketplace” report sold remedies known as “nosodes” -- which are basically sugar pills -- to their patients.

“This is what a remedy looks like,” a homeopath told her patient. “It’s just a little, little ball and it’s just like sugar – it tastes really good.”

The homeopaths told their patients these nosodes were just as effective as vaccinations.

“From the studies that have been done, it is no different,” one homeopath claimed.

And yes, they even have a "study" done by Isaac Golden, an Australian homeopath, that proves how effective their sugar pills are, although Australian health authorities ordered websites to take down advertisements for quack treatments based on the "research." But really, the sugar pills work, Golden insists -- it's just through a process that's way too complicated to explain on a TV news documentary:

“It works on a very subtle level, as does homeopathic treatment,” Golden told CBC. “Unfortunately, it would take more of the time than the program has to give a full explanation of that.”

We certainly sympathize -- there were parts of the Cosmos reboot that were hard to follow, and that was real science, so we can see how a careful explanation of homeopathic magic might be hard to pull off on teevee.

In the interests of full disclosure, Yr Dok Zoom has to admit that he does have a wheezy, coughing dog in this fight -- we're just getting over a really nasty bout of bronchitis, which has responded to medical treatment (so yes, that makes us shills for Big Pharma). When we initially went to see a doctor about the cough that just wouldn't get better, the doc ordered a test for whooping cough, since there's been an outbreak of that 19th century disease in Idaho, mostly due to large numbers of unvaccinated children. The prospect of having a disease from the Gilded Age was more than a little annoying, frankly, considering that we don't even have a local sanitarium to check into, and the local Rite-Aid doesn't carry poultices. And darned if Obamacare would pay for a manservant to fetch our lap-robe.

So there's your anti-vax update: Childhood diseases are no big deal, if your luck holds, but to be on the safe side, the placebo effect apparently works as a vaccine, too.