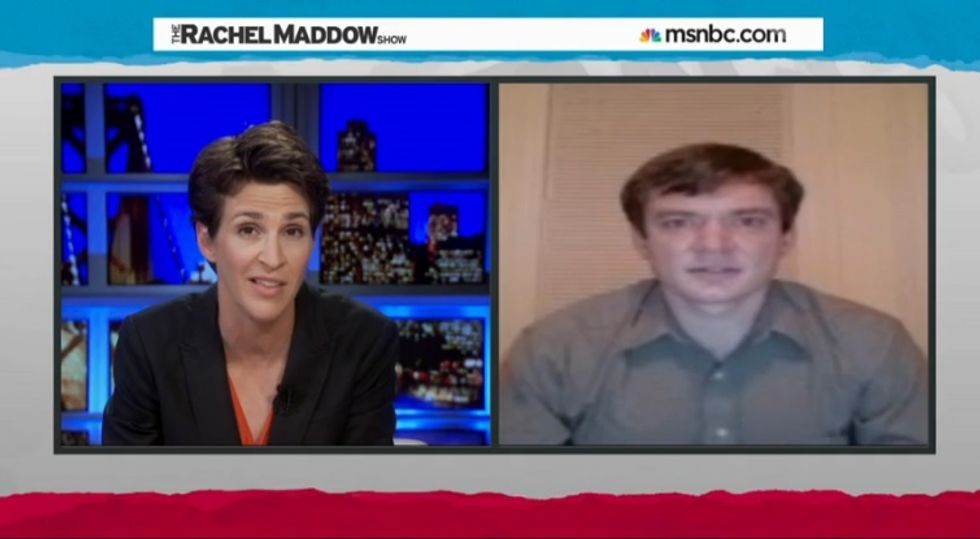 Get ready to be angry, kids. Monday night, Rachel Maddow interviewed Ryan Boyko, a Yale PhD student in Public Health, who is one of about eight people put on quarantine by order of Connecticut Gov. Dannel P. Malloy. Not because Boyko has Ebola, and not because he has Ebola symptoms, and not even because he had contact with any Ebola patients.

Nope, Ryan Boyko is under the equivalent of house arrest, with an armed police officer guarding his front door, because he traveled to Liberia to help the Liberian government set up a computer database to track contacts of patients with Ebola. He never came in contact with anyone who had Ebola, and definitely not with any patients' bodily fluids. (Do we need to say, one more time, that you can only catch Ebola through direct contact with the bodily fluids of a patient who has Ebola symptoms? Maybe somebody should mention that now and then.)

But Boyko traveled daily from his hotel to a government IT department in a country where there's an Ebola outbreak, so he's now in his second week of mandatory quarantine. He did have a low-grade fever a few days after returning to the U.S., and was referred to Yale-New Haven Hospital for testing. It made the news the day before Gov. Malloy announced his Ebola quarantine, so the timing was perfect. Never mind that the test results were negative, and that the doctors at the hospital joked with Boyko that he was "the only person in New Haven they could say for sure did not have Ebola."

Fear is easily the stupidest possible way to go about setting public policy around a medical issue, but by god, that seems to be exactly the direction plenty of terrified state governments are going.

This interview is infuriating. We think we must have said "those motherfuckers!" at least three times on our first viewing. Watch it, and make sure you get others to watch it. This is obscene.