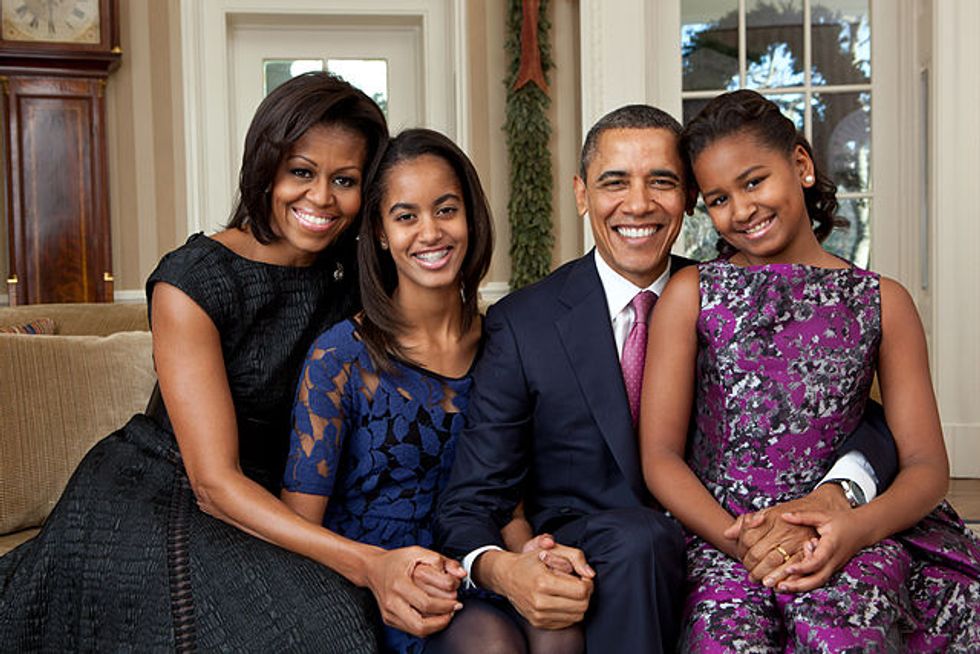 Ugh, the so-called "first family" is trying to start a race war -- again! Like it's not bad enough that President Obama is always injecting race into statements about how if he had a black son, his son would be black, which serves no purpose other than inciting White Man's Fury on Fox News. Or how Michelle Obama has been injecting race into trying to keep our fat-ass kids from dropping dead from their strict diets of soda and cheesy poofs -- by being black.

Now the Obamas have gone and given an Angry Black First Family interview to the radical leftist commie rag People magazine. They might as well have just given a statement from the White House that the major news networks would refuse to carry anyway declaring it's time to War On Whitey!

As the Very Serious Journalist in People astutely observed, despite the election of our first black president, which ushered in a new era of post-racial America, or was supposed to anyway, the Obamas’ “encounters with racial prejudice aren't as far in the past as one might expect.” We don’t know who this “one” is, but we’re pretty sure it’s someone on the Fox payroll. Or the Washington Post. [contextly_sidebar id="py80500NHXx5kaz0dyfzqI2GW74URLAS"]

"I think people forget that we've lived in the White House for six years," the first lady told PEOPLE, laughing wryly, along with her husband, at the assumption that the first family has been largely insulated from coming face-to-face with racism.

"Before that, Barack Obama was a black man that lived on the South Side of Chicago, who had his share of troubles catching cabs," Mrs. Obama said in the Dec. 10 interview appearing in the new issue of PEOPLE.

There are also some horrifying tales of people treating Mr. and Mrs. Usurper-in-chief like store clerks at Target, or that time Barack Obama “was wearing a tuxedo at a black-tie dinner, and somebody asked him to get coffee." But that's probably mere coincidence and has nothing to do with race. It's not as if an entire political party grew out of the existing Republican Party, demanding the president prove he wasn't really born in Kenya because black, er, uh, wait, because freedom. [contextly_sidebar id="u1G88L6VcEhxWmND9eXf3Y5fDVCyfcac"]

Besides, everyone knows Obama's been going around death paneling anyone who is simply asking what America's finest racists are thinking about how his birth certificate is a total phony fake photoshopped thingy, and also, have we even seen his real grades from elementary school? [contextly_sidebar id="bm7hmACMjL5M6FwAZ6mUQ2VlndVtwdd3"]