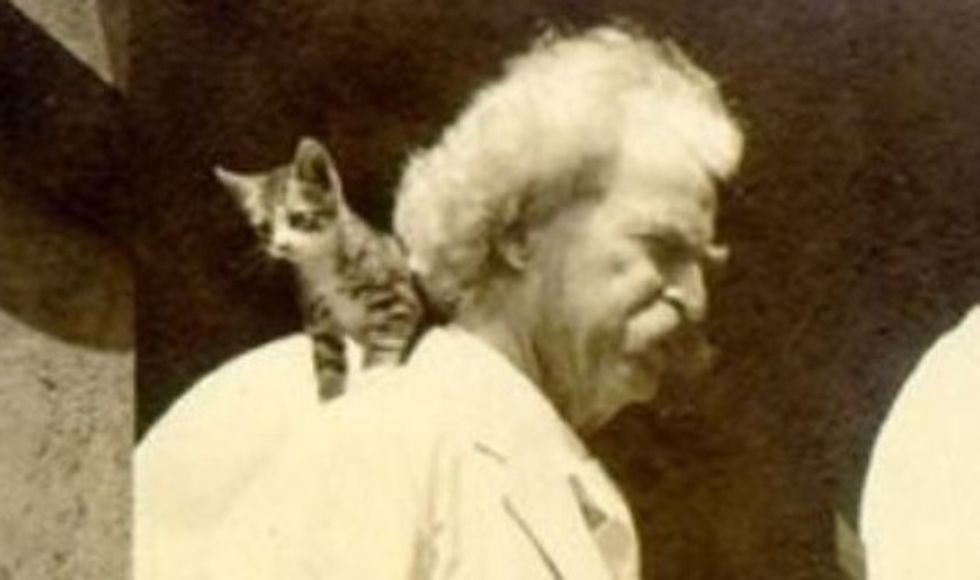 Colorado radio preacher Kevin Swanson, the genius who determined that God sends wildfires to punish the multiple scourges ofgay marriage, abortion, and women wearing pants, warned that the Boy Scouts will soon have merit badges for sodomy and cannibalism, and alerted America to how the Pill leaves women's wombs littered with lots and lots of tiny dead babies, has now turned his keen analytical skills to the world of literature, and reveals that Mark Twain was possessed by demons.

In a guest appearance on fellow wingnut Rick Wiles' radio show (every wingnut now has a radio show), Swanson explained that

Well, not exactly, Kevvie. Huck's no atheist. He's a Christian, through and through, and so absolutely convinced by all the good Christian adults in his world that you can't be a Christian and oppose slavery that he decides that freeing his friend Jim is well worth going to hell for. Funny how Swanson misses that Huck's devotion to his fellow human being is the most Christ-like act in the whole novel, eh? (Yes, yes, we follow Hemingway's advice and try to block out the sad farce of the final few chapters.)

Christianists are, of course, compelled to have a problem with Twain, as we noted in our very first foray into the land of Christian textbooks, in which a Bob Jones University Press text proclaimed,

Twain’s outlook was both self-centered and ultimately hopeless. Denying that he was created in the image of God, Twain was able to rid himself of feeling any responsibility to his Creator. At the same time, however, he defiantly cut himself off from God’s love. Twain’s skepticism was clearly not the honest questioning of a seeker of truth but the deliberate defiance of a confessed rebel.

And really, it's probably a fair cop, though Twain was every bit as dismissive of demons as he was of the Cosmic Bully; if anything, Twain may have been something of a Deist. In Mark Twain, a Biography -- a shorter, more deliberately satirical work than Twain's actual Autobiobraphy -- he wrote

To trust the God of the Bible is to trust an irascible, vindictive, fierce and ever fickle and changeful master; to trust the true God is to trust a Being who has uttered no promises, but whose beneficent, exact, and changeless ordering of the machinery of His colossal universe is proof that He is at least steadfast to His purposes; whose unwritten laws, so far as they affect man, being equal and impartial, show that he is just and fair[.]

Though of course, trying to pin Samuel Clemens down to any single theological position is probably about as futile as it is with Jefferson or Franklin; they all enjoyed speculating about theological possibilities far more than preaching certainties, which is why they're so damned dangerous to fundamentalists.

The other delightful bit of news we gleaned from RightWingWatch's story on Swanson and Twain is that Kevin Swanson has written what looks to be a perfectly terrible book that finds demonic motives behind virtually every aspect of Western civilization, from Thomas Aquinas to the present day. Because we love you, Wonkettophiles, we shall read it so you won't have to.