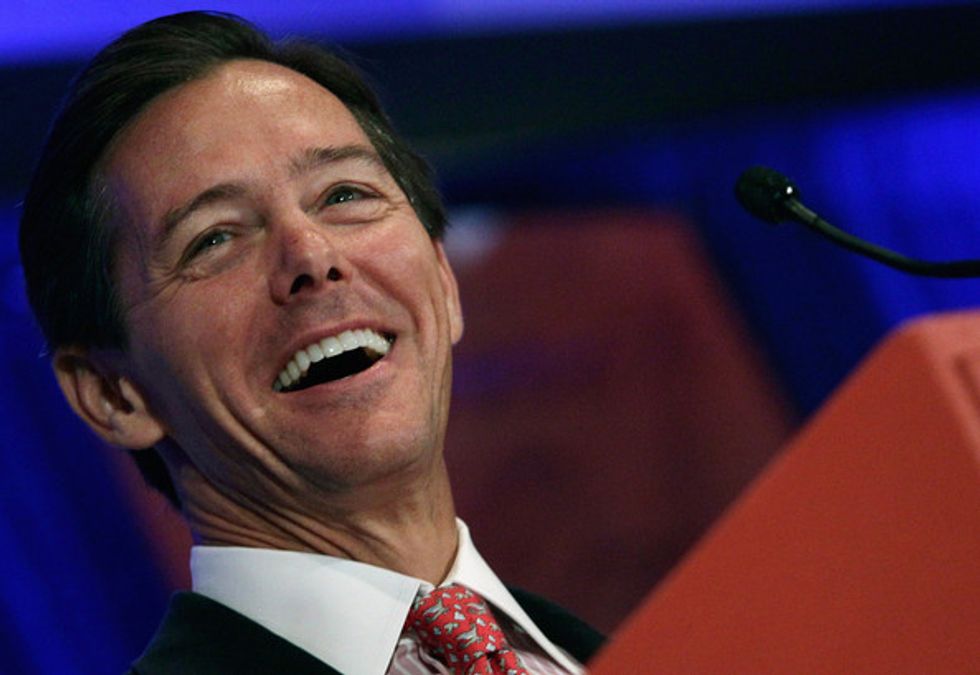 You really have to hand it to Ralph Reed. The man has got some staying power. For like 1,000 years now, he has been the most reliably self-righteous Christian concern troll ever. For wherever two or three are gathered in Jesus's name, there will be Ralph Reed whinging about how he and his ilk are the most persecuted people to ever walk God's green earth.

Yesterday, Reed called up fellow crocodile tear shedder Glenn Beck, ostensibly to chat about persecution of Christians across the Middle East, except that what it was really time to talk about is how hard it is for Christians in America.

Why, Glenn wondered through a mouthful of money and a veritable torrent of glycerine tears, are pastors in 'Merica not speaking out enough about the fact that in other parts of the globe, people get stone cold murdered for being Christian? Well, according to Ralph Reed, because Obama.

There is not the kind of top of mind awareness in the church of what is going on, in part because of the failure of this administration to use its bully pulpit to emphasize it.

Wait, so if Bamz, who we all know evangelicals just lurrrvvveee, would only talk about this more, then they would pay attention to the fact that their co-religionists are being murdered? Like if Bamz isn't yelling at them, they just can't be roused to care? Oh, wait, says Ralph Reed, who is a breathtakingly cynical and craven opportunist, the good Christians of America are too busy to worry about people getting killed for believing in Jesus because here they have to deal with the unbearable terror of democratically passed laws that they don't like.

[B]ecause we’ve had our own war on faith being waged here in America, not obviously with bombs and bullets and tear gas, but rather with court rulings and executive orders and laws that seek to marginalize the role of faith in our own society.”

Thank god Ralph Reed has finally seen the light and will now start mobilizing against the awful persecution of Christians worldwide, and since he has his very own bully pulpit, we're sure he's going to do something very important and useful.

“Our goal is to get over a million Americans to sign this petition to the White House, to the State Department, and to every member of the Senate of the House,” he continued, “demanding that religious freedom and protection of Christians and other persecuted religious minorities occupy the centerpiece of the conduct of our foreign policy.”

Oh. Well then. That and a heaping helping of prayer should probably fix up the whole Christians-getting-murdered-in-Sudan right quick, but only if Barack Obama will stop his ceaseless tyranny of getting laws passed that don't exactly conform with Ralph Reed's personal faith, because right now that is taking all Ralphie's energy. See? We told you it was all Obama's fault.