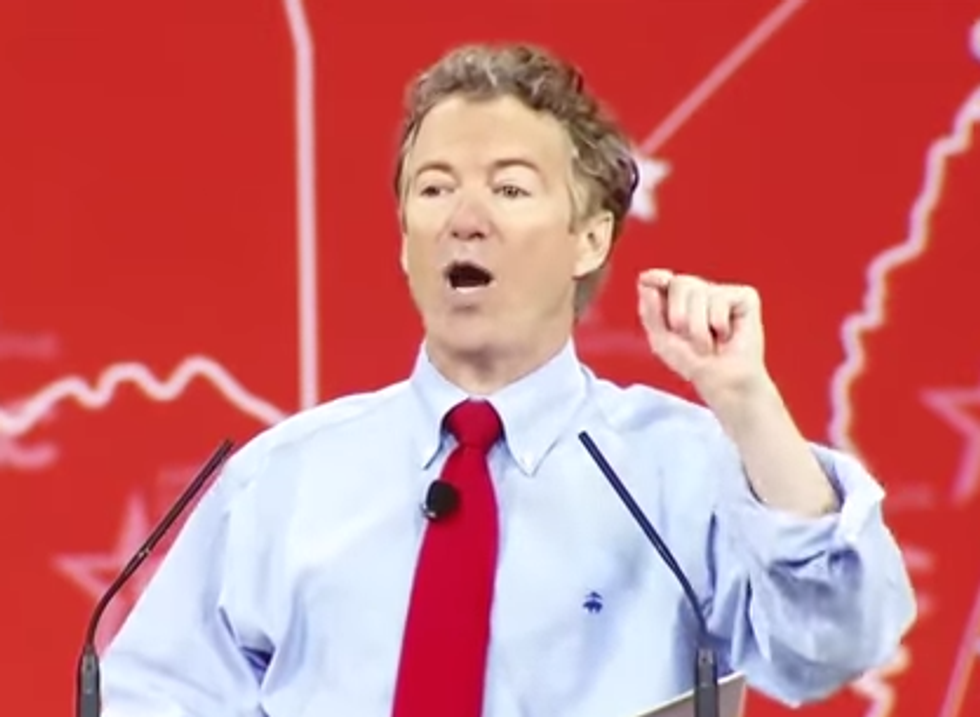 Rand Paul has had a rough couple of days since he announced that he will be the next, LOL, president of these United States. He spent Day One being mocked ruthlessly on the intertubes for the disaster that is his campaign website, filled with misspelled words like "eductation," ridiculous swag (hoodies and skull caps, Senator? Really?), and a page of "endorsements" from German stock photos.

He spent his second day picking fights with everyone in the media, Randsplaining how "real" journalism should work. (It should work like his interviews on Fox, where he gets to spout bullshit while Sean Hannity strokes him off and tells him he's a great American, like he's done 54 times in the last two years alone, more than twice as much as any other Republican presidential contender. And that doesn't include the other 65 times he's appeared on non-Hannity shows on Fox.)

But the one thing self-certified "opthalmologist" Rand Paul wants us to know about him, as he explained to male interviewer Wolf Blitzer, is that when it comes to being A Asshole to reporters, he is NOT sexist. He will asshole anyone, male or not male:

You know, I think I’ve been universally short-tempered and testy with both male and female reporters. I’ll own up to that. And it’s hard sometimes. As you know, like, during our interview right now, I’m looking at only a camera. I can’t see you. And it’s hard to have a true interaction sometimes, particularly if it’s a hostile interviewer. So I do think that interviews should be questions, and not necessarily editorializing.

Besides, as Fox's Megyn Kelly assured him on Wednesday night, while he seems "overly emotional" and "thin-skinned" -- and if he can't handle questions from the "Today" show, how does he expect to handle Republican primary debates, HUH? -- he does NOT have a problem with lady journalists in particular. In fact, people who say otherwise "are themselves being sexist." And Kelly wasn't just declaring Rand Paul's equal opportunity jerkitude as a Fox News bobblehead, but "as a female reporter."

So that settles it, sexist and biased liberal media: Rand Paul will be an obnoxious twit to you, whether you have a penis or not. Uh, hooray?