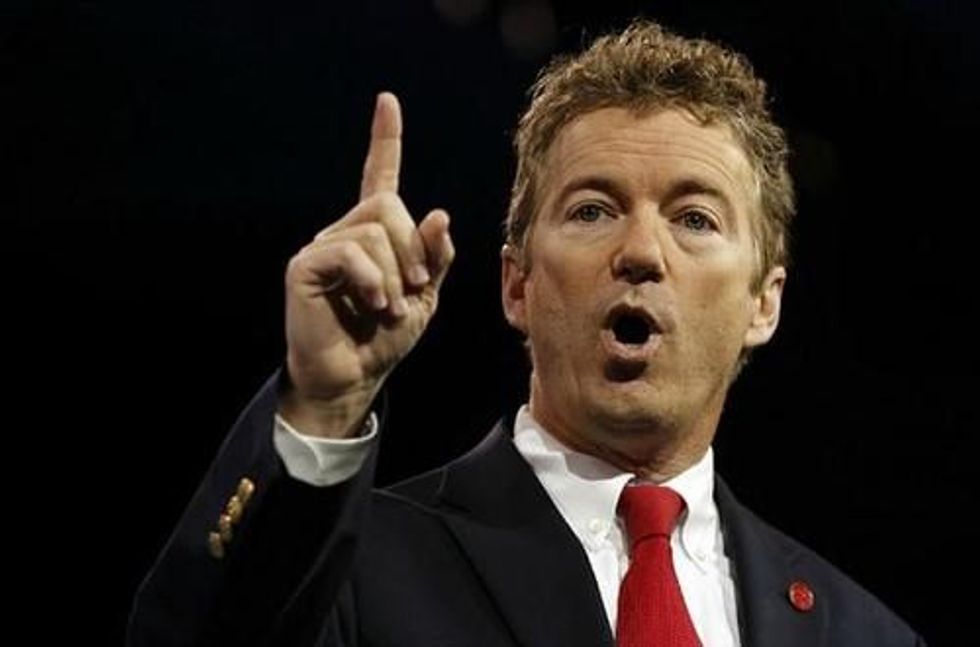 Look, Rand Paul already explained to us idiots that he is NOT sexist just because he has a habit of being a jerk to lady reporters. He is a jerk to ALL reporters, so there! But he has thought about it some -- after Fox News lady Megyn Kelly told him a couple weeks ago, in her opinion "as a female reporter," that it is sexist to say Rand Paul is sexist -- and you know what? He has decided, all on his own (shut up, he is NOT also a plagiarist too), that it's pretty sexist to say that, and YOU YES YOU are the real sexists!

Well, the funny thing about it is it's kind of a sexist position to think that somehow women announcers are less capable to handle themselves than men. I don’t think that. But everybody that was complaining about it, thinking it had something to do with gender -- basically, that’s insulting to the people doing the questioning. Really, the problem is is [sic] that we have a lot of media that are just so far on the left, that we just don’t have any neutral questions. If you go on there as a Democrat, they laugh and yuk it up and, you know, talk about how great things are going. But it’s a little different when Republicans are on the national news.

Oh, we get it now! When Rand Paul shushed "woman announcer" Kelly Evans and explained to Savannah Guthrie that she was doing her job all wrong by "editorializing" instead of asking the kinds of questions he'd rather answer -- he was not insulting them, and certainly not because they are chicks, no sir! But boy, it sure is insulting to them to say that he was. Why are you so sexist against those perfectly capable and yet totally inept girl talkers, HUH?

Hey, wanna know the hard-hitting appropriately journalistic question (asked by Simon Conway, a man, not that it's relevant) to which Dr. Paul was responding? This is what real "doing the questioning" looks like:

This is the part that really made me laugh. Which is how the mainstream media went after you after your encounter with Savannah Guthrie, because I’m thinking, you got Joe Biden -- way too touchy feely with every woman that comes within, close enough for him to actually touch -- I find it really, really creepy -- and all we hear from them is “Ah, Uncle Joe!” You quite rightly point out that Savannah Guthrie isn’t asking you a question, and you’re the one with a problem with women. I find it amusing. I don’t know what it did to you, but it made me smile.

See, those broads editorialized at Rand Paul and did NOT ask him questions, whereas this dude editorialized at him and did NOT ask him questions, and while Rand Paul did interrupt the ladies to tell them how they are doing it all wrong, he just yukked it up with the dude because it's so funny how people say Rand Paul is sexist, when they are obviously sexist for saying that. Take heed, women announcers, if you don't wanna get shushed. That is how you "question" Rand Paul the right way.