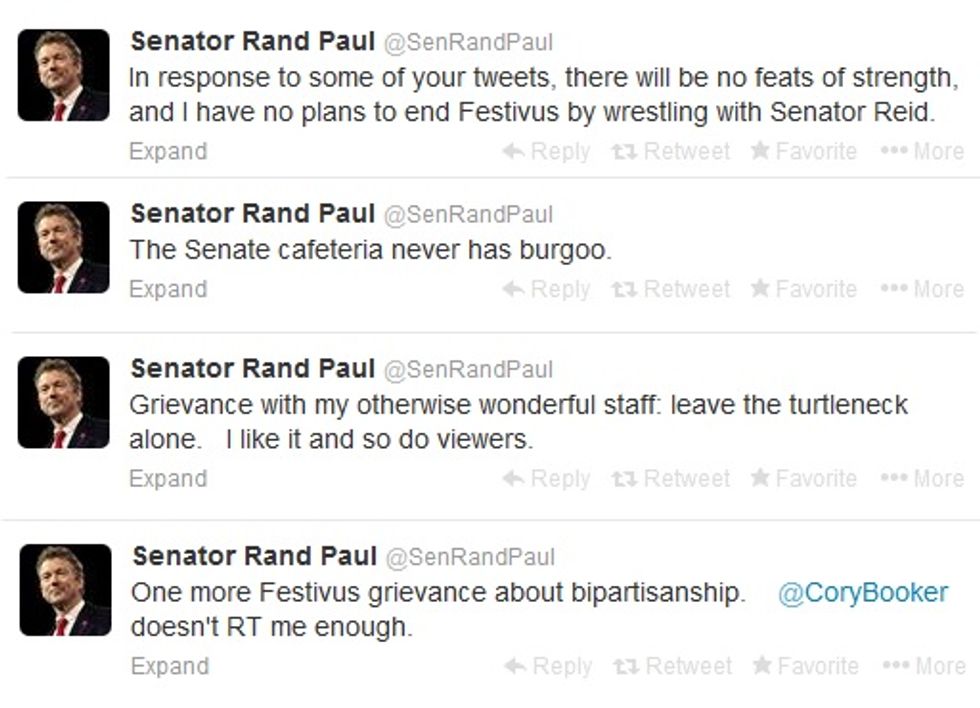 As if it weren't bad enough that the right has turned "Merry Christmas" into a shibboleth, now they're trying to co-opt Festivus.* Senator Rand Paul (R-Galt's Gulch) announced yesterday that he would be tweeting his very own "airing of grievances" for fun and publicity, and so of course we are compelled to indulge him.

Strangely, the nine fulltime employees of Twitchy found this something worth promoting, rather than part of the War On Christmas. There are rules on this, and if Rand Paul wants to have fun with a show about liberal New York Jews who mock the values of Real America, it's funny, by god.

And so commenced the lighthearted string of hilarious Seinfeldian "observations" (we've rearranged in chronological order, for le clarity):

And it continued, with more and more amusing comedy bits (and even a single jokelike object in there...):

Because nothing says hilarious holiday comedy stylings like ranting about the Fed. We'll spare you the rest of the political stuff, because yawn.

But then, something strange happened -- Paul (or really, whoever's running his Twitter feed; this is Rand Goddamned Paul after all -- started tossing in some actual jokes. They weren't all knee-slappers, but credit where it's due:

And then, a Festivus Miracle! Actual bipartisan dialogue broke out:

And then they went to the Cloakroom, lit up a big old doobie, and made out, the end!

*If Yr Wonkette were a real news site, this is where we explain what Festivus is. If you haven't heard of Festivus since it was made up in 1997, we are not going to help you. You people know how to use Google. OR DO YOU?